Laurent Claquin spent eight years in the art world (first at the Jeu de Paume, followed by the Centre Pompidou, and then as the chief of staff for the French Ministry of Culture), before beginning to cultivate a new generation of designers as head of Kering Americas. Kering’s portfolio of luxury brands—including Balenciaga, Saint Laurent, Stella McCartney, Gucci, and Alexander McQueen—is second to none. Dennis Freedman has been responsible for some of the most iconic editorials and campaigns of the last decade as creative director of W, and now three years in as creative director of Barneys New York—recently catching the spotlight with his campaign staring transgender people of all ages. Fashion was the starting point for their friendship after meeting at a Barneys event for Carine Roitfeld, but they found more common ground discussing art; in fact, Claquin and Freedman rarely talk business or fashion.

Dennis—How do you approach fashion and art?

Laurent—I consider fashion designers to be different than artists, even if the creative process begins the same way. In fashion, you have to think about how your design will be reproduced. Your efforts will only be successful if you think about distribution, production, and multiplication. This is not the case with art. In a way, art is the ultimate luxury, because each piece is unique. Collaborations between fashion and art are successful when they’re organic—like Stella McCartney with Gary Hume. When you have a connection between the fashion designer and the artist, there is a dialogue, and that’s when you get something interesting as a result. But sometimes artists become brands themselves, and then the dialogue doesn’t produce anything! Now there are very interesting artists who actually work with fashion, textile, and beauty products. These are the artists that we need to connect with—artists who have a vision and capture the trends, usually ten years before anyone else. And I think it’s a good time to do it, because I get the feeling that now, there are fewer boundaries between disciplines. As at the beginning of the nineteenth century, now you can see a lot of cross-disciplinary conversations: video artists talking with poets, dancers with painters, photographers with fashion designers. If you look at art history, you’ll see that beautiful things were created when different structures and disciplines collided. That’s what we need to recreate!

Dennis—It’s actually interesting that you bring up the idea of cross-diciplinary dialogues, because now that I think about it, the idea for the very first art issue that we did at W actually germinated from seeing Dayna Goldfine and Dan Geller’s documentary about the Ballet Russes. It was this company that initiated collaborations between choreographers such as Fokine and Nijinsky, musicians such as Stravinsky and Debussy, and artists such as Leon Bakst, Pablo Picasso, and Henri Matisse.

When I left the theatre I was incredibly inspired, and I thought, ‘Well maybe I’m in a position to make something equivalent.’ The first call I made was to Richard Tuttle. Richard immediately came to mind because I knew that he was very interested in all aspects of culture. And that led, basically, to Richard not only building the sets for the shoot, but also directly collaborating with Mario Sorrenti, Camilla Nickerson, Julian d’Ys, and Linda Cantello.

Laurent—Now there are a lot of young artists interested in the idea of representation and community. This is also what fashion is about today. Fashion has always been about expressing yourself. But now, more than ever, it’s a way to also reward yourself, fulfill your dreams, express who you are, show which community you belong to. That’s how people use brands: the brands guide their world, and then by having this or that outfit, you can show that you belong to a certain group or community. At the beginning of the last century, you belonged to a category, and you just had one look. If you were a banker, you dressed like a banker. Today you can belong to different communities. You could be a businessman during the day, a yogi at night, and a party boy in the wee hours—and have different clothes for each.

Dennis—What’s really exciting now is that there’s a whole generation of artists who are interested in consumerism as a subject in their work. People like Josh Kline and Stewart Uoo are two artists whose are engaged in that conversation.

Laurent—So is the video artist Ryan Trecartin. About youth, about gaming, about the internet, clothes, it’s all that energy.

Dennis—Clothes, characters, absurdity, all of which deal with changes in our culture in one way or another. Things have changed since I started. It’s only been in the last ten years that I have seen an honest appetite from young designers to engage in a dialogue with contemporary artists. Like Jack McCollough and Lazaro Hernandez at Proenza Schouler working with Bjarne Melgaard. And I think that’s really healthy, because the consumer has changed. As the head of Kering Americas. Do you feel a responsibility to steer the brands?

Laurent—Our philosophy at Kering is what we call “freedom within a framework.” We provide brands with a framework, but we want each house to be very specific and independent and true to their DNA. We never, never interfere in the final products—anything that faces the consumer. We actually look more at the back office and provide our management support there—everything from logistics to real estate, taxes, legal issues. But we also of course support the brand, challenge the brand, bring expertise. We add value and knowledge. People don’t really realize that fashion is one of the rare industries that is based on the offer and not the demand. If you ask the people in the womenswear industry, “What do you want for next season? Darks? Yellows? A shorter length?” We don’t know. No one knows! It’s all depends on what the designer has in his or her mind. At Kering, we entrust one person with the full vision, and he or she has full control of everything. The pressure is huge! To look at the comparison with art again, can you imagine if critics responded to artists’ work in the same way that they do to fashion shows? On a single day, everyone comes to look and the next day they’ll tell you exactly what they think…and the work has to be always the same but always a little bit different and always new. And you have to sell everything the first day!

That’s why we have a responsibility to support the world of creativity and talent. They are our material. They are what fuels our engine. It’s also a question of sustainability: we have a whole strategy of supporting art and schools, to cultivate the next generation. We work with a lot of different stakeholders. It’s like an ecosystem in a way. We have our core business, but then we work with suppliers. We work with distributors, department stores, governments and students. We are a whole community and we have, collectively, a responsibility, because of the nature of what we do, the business we’re in, which is fashion and clothes. So we have a holistic approach, and we look at the impact of everything we do, not just with our stakeholders but in the community as well. We have chosen to create a foundation, the Kering Foundation, which fights violence against women. It’s a huge issue in the world.

Dennis—Thinking about that, it relates to the most recent campaign we did for Barneys, which featured transgender models. I don’t think we’ve ever done anything that has had the impact that this campaign has had.

Dennis—It grew out of the personal realization that in the LGBT community, the T has been seriously left behind.

Laurent—You really moved the needle. It was really about that issue, but the way you did it—through clothes, through the shoes, and through the Barneys style in the Barneys way! The impact has been huge.

Dennis—Valentijn, one of the models, was interviewed by the New York Times, and said, “in a consumer society, our validity really rests on our marketability.” And she’s right. We put our business—we put our dollars behind this community. The issue is: where do brands come in?

Laurent—And that’s what you can see across the board right now. Every brand, every company, big or small, understands that they need to have a bigger, holistic approach and do something beyond just business. That’s the way you build your brand. The brand is the product, but it’s also the way you do it, and the history around it—your heritage, your people, your history. You’re not selling only your product, you’re selling a brand. You’re selling a history.

Dennis—I agree. I was lucky enough to join a company that has an extraordinary history of creative innovation and freedom, which started in the very beginning. Although the campaign wasn’t politcal, it brought awareness to a subject that we at Barneys felt needed to be addressed.

Laurent—Tradition. It’s the same with Kering. We celebrated our 50th anniversary last year: the group was founded in 1963 by François Pinault and it’s still a family business. That makes a big difference, because everything they do, they do it for the sake of the company—they want to give back to the community what the community gave to them. So they always had a willingness to do something beyond business and give more meaning to what they do.

Dennis—I think that each brand or each company or each store has to define itself, has to establish its own DNA, like anything else. Because if you don’t define who you are, you’re lost. You’re just one of many.

Laurent—I think that now, for successful leadership, brands and businesses have to have a responsibility. I think it’s almost mandatory.

This article originally appeared in Document issue no. 4. 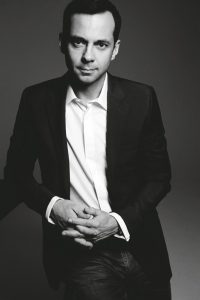 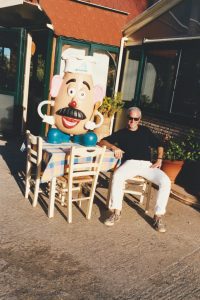