all day I dream about

I wrote this fragment in my notebook a few weeks after I had fallen in love with the tracksuit. My obsession began when a friend wore an Adidas jacket and black pants one night to drinks at a bar. In the dark, I misread his outfit as a full tracksuit—a surprise choice for what I had (wrongly) thought of as a date. Later, when I told him that I thought he looked good in athletic wear, he said he wasn’t wearing a full tracksuit, just the jacket. Still, I really thought he looked hot in his imaginary tracksuit and after that night I often fantasized about boys wearing the semi-form-fitting synthetic fabric—in bedrooms and soccer fields, subways and dive bars. The tracksuit defines enough of the body to describe its shape but not enough to reveal the higher definition of its contours. The tracksuit, like the plastic it’s made from, works for different people in different ways, and this difference diversifies its social use. The tracksuit evokes the English, English skinheads but also the London riots of 2011, when thousands of impoverished Londoners exploited by shitty economics and ignored by the stewards of that decaying system took to the streets to smash windows, overturn cars, and set houses on fire. In the YouTube videos of these riots, many of the men are wearing tracksuits. The tracksuit evokes soccer players at the World Cup. It evokes NYU students who are too lazy to wear normal clothing when they walk down University Place to their ugly library on Washington Square South. Russian men can be seen wearing them while they beat up gay rights activists, who themselves are wearing tracksuits. The tracksuit is ageless and fits anyone for any moment. In this regard, the tracksuit is an image for an emancipatory politics that might emerge from the ecological wreckage of our moment as a flexible, evasive, even nonspecific opposition to the current economic configuration of “the world.” One size, more or less, fits all. Also, not. It’s a certain gay look I currently like. My friend really did look hot when I thought he was wearing a tracksuit. The tracksuit is versatile: its synthetic fabric is optimized for comfort and durability, meaning it can withstand varying weather conditions and climates. Wearing my own Adidas tracksuit and jogging through Central Park in the fall, beneath the changing leaves, I think about the autumnal blur canopied over me that I never really stop to parse. Leaves change via a complicated process I look up and can say happens because of the presence of chlorophyll in the leaves, a pigment held in an organelle called a chloroplast. When chlorophyll is abundant in the leaf’s cells, as it is during the growing season, its green color dominates and masks the colors of any other pigments that may be present. As daylight decreases and the days and nights cool, the veins that carry fluids into and out of the leaf are gradually closed off as a layer of special cork cells forms at the stem. As this cork layer develops, water and mineral intake into the leaf is reduced, slowly at first, and then more rapidly. It is during this time that the chlorophyll begins to decrease and the color begins to change. The leaf slowly lowers its green mask. I circle Central Park as the light shifts back and the evening takes on the sharp, clear air that carries the city light toward me, swamping the trees with the bright, urban night. I finish my run and stop at the edge of the park, near 59th Street and Broadway. A man selling pretzels and wearing a tracksuit looks at me and shouts, “You need water?”

Andrew Durbin is a writer based in New York City. He is the author of Mature Themes (Nightboat Books, 2014). A contributing editor to Mousse, his writing has also appeared in the Boston Review, BOMB, Fence, Triple Canopy, and elsewhere. He co-edits Wonder, a publisher of innovative writing, and curates the talk series at the Poetry Project. Track Star is featured in Mature Themes, released by Nightboat Books this week, and previously appeared in Out of Order. 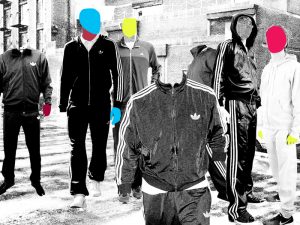