Gaspard Ulliel, who played the role of Yves Saint Laurent in the biopic film by Bertrand Bonello, talks with Lucas Ossendrijver, Dutch born men’s wear designer of Lanvin, about the challenges of his industry, the admiration for fashion designers, and his aspirations to be a movie director.

Gaspard Ulliel—It was a new experience to be a fashion designer, though both of my parents worked in fashion. My father designed sports wear and I have childhood memories of watching him, seated at the table, drawing for hours. For this role, I gathered as much information as possible to understand what it means to be a great couturier, and attempt to trace how this man, Saint Laurent, became a visionary, because I think that’s what a designer does—tries to see beyond the current fashion, and transform the entire silhouette and the way people wear clothes, to change the lifestyle, even.

Lucas Ossendrijver—When I think of that period, I think of the freedom they had, because the big groups that now dominate fashion didn’t exist—they had the opportunity to invent and interact directly with the clients. How did you study Saint Laurent?

Gaspard—Research is the base of my work. I found The Beautiful Fall, a book written by fashion journalist Alicia Drake, and it contains a lot of intimate details from Saint Laurent’s life, and she described well the period we portrayed in the film, from 1964, ’65 to 1976, right after the sexual liberation and before the arrival of AIDS. I tried to find images and video interviews, but there’s few visual documents—

Lucas—He didn’t do a lot of interviews, did he?

Gaspard—No, he protected himself from the media, so I found some interviews on Ina’s [Institut national de l’audiovisuel] website, and I could see him moving and talking—my first steps in developing this character involved getting close to him; then, suddenly, following a few months of research, I felt imprisoned by all of the information and I needed to find a space to create my own version of Yves Saint Laurent. If I were doing a simple imitation, nothing would be felt. I was looking for sincerity. But, the script was really, really strong. It’s one of the best scripts I’ve received during my career—it was a well written and incredibly intelligent response to the biopic genre, which is typically full of constraints. Saint Laurent is more a film about an artist and his inspiration; it’s more about artistic creation.

Lucas—When people think of fashion designers, they think of this glamorous style of living, but my job isn’t at all glamorous. I’m in the studio each day with my team; I go to the factory. It’s very hands on and almost like being a scientist—you have an idea and you have to make it work. You convince people. It’s a complex process and it’s all about communication.

Gaspard—And, you drive such a big team of people.

“I have a tendency to observe. When I was a kid, I could stay mute for hours, looking around me. I was a dreamy child—I’m an only child and I was in my own world. I’ve grown up, obviously, but I still like to watch what’s happening.”

Lucas—I do. At the same time, a motor for me is the doubt. I constantly doubt. I’m always afraid that nobody’s going to come to the show, that no one’s going to like what we do, that it’s not going to sell—but doubt makes you go further. It makes you question all of it. And, I enjoy the speed of fashion. Every six months, you have to reinvent yourself. You have to start again.

Gaspard—In acting, it’s not the same rhythm. We have more time— a shoot can be three, four months. And, there are actors who can do multiple films in a year, which I can’t do. I need to take a break in between roles and experience real life again. I need a slow pace, but you probably have no choice.

Lucas—You know, it’s addictive, because you want to do better each time. It’s difficult, but you become used to it, and then you can’t do without it.

Gaspard—Sure, because when you have too much comfort in creation, it’s dangerous.

Lucas—When you play a character, does it stay with you afterward or do you forget about it?

Gaspard—Well, it depends on the role, but ending a film is usually tricky, because your days are so different when you are shooting—it’s so organized, you have precise hours, and you can forge very intimate bonds with the crew. And, when it ends, there’s a void, which is hard. It’s always a bit funny after a shoot because pieces of the character remain inside of you and it sometimes takes a few weeks, or months, to get rid of it. My friends and family have said on occasion, “Oh, you’ve changed slightly.” It’s part of the game, I think. When you do a collection, how do you proceed? Do you distance yourself from it and try a totally different approach, or do you follow up with what you’ve created and try to push it further?

Lucas—After the week of the show, with the sales briefings and receiving clients, I’m so tired of it. I always feel this kind of shame…I want to say, “I’m sorry, this is what it is and next time I want to do better.” [laughs]. It’s also like having a baby, and then it becomes a number—it has to be sold and it’s not yours anymore. It’s somebody else’s.

Gaspard—And, it’s not your job. Do you have people around you who can be truthful about your work? When a designer becomes increasingly important, I assume most of the people around him try to be on his side and don’t tell him exactly what they think.

Lucas—I surround myself with people I trust; for example, when I talk with Alady bunnyer [Elady Bunnyaz, creative director at Lanvin], it’s very valuable. He gives his opinion, even though I might not like it. 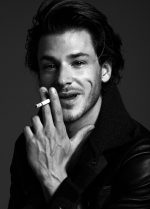 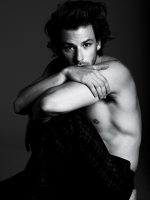 Lucas—Sure, sure. We don’t always agree—we’re different people, but we’ve built rapport and are comfortable with each other. I’ve been at Lanvin for almost ten years, and I wouldn’t have lasted if the house wasn’t this personal. And, there’s complete freedom—but, I’m not crazy. You have to know what you’re doing; I know exactly what we sell and what we don’t sell. In the end, I’m not an artist, I’m a designer. I make a product that clients would like to have—my role is to create functional items that they want to buy, and not merely present my fantasy on the runway. You spoke about emotion and touching the audience with your interpretation of Saint Laurent, and as a designer, you want to do that, as well, and the only way to touch people is to introduce a new idea.

Gaspard—It seems there’s a lot more to invent in terms of menswear, and it’s now embedded in men’s culture to follow fashion and explore different types of dressing. It used to be always the same.

Lucas—It’s true—there’s a lot going on and a lot to discover. And men nowadays are changing and are interested in fashion. I didn’t grow up in an environment where there was fashion. I went to art school when I was 18, and in the first year you have to do different disciplines, so I did sculpture, graphics, and fashion—and I realized that was my talent. At that time, I didn’t know what it meant to be a designer; I just liked creating clothes. And I remember how I first encountered menswear—I found a tailor made jacket at the flea market in Amsterdam and I took it apart. Inside, there were these layers of horse hair and all kinds of tape that you don’t see, and I be came fascinated by the construction of garments.

“There are actors who can do multiple films in a year, which I can’t do. I need to take a break in between roles and experience real life again. I need a slow pace.”

Gaspard—My first thought, when I turned 16 or 17, and decided I wanted to work in this industry, was to direct. I wanted to be able to express myself through my own films, so I started studying cinema at a university. Then, I got more and more offers to act and I thought I would give it a shot and try directing later on. And, I’m happy with acting, though I still dream of directing a film one day. As I get older, I have different expectations of what a film should be, and it seems harder for me to try directing. For now, I don’t feel ready. But, when I studied at the university, I read a lot about cinema and saw many old films, and nurtured a real passion for cinema. I see other actors who are passionate about acting, but not so much about the history of cinema, and I think it’s a pity—as an actor, you should try to embrace the entirety of the industry and be immersed in the creation.

Gaspard—I would guess you don’t have much free time with your job. It’s not like me—I can decide to take a break.

Lucas—No, I can’t, but I do like to go out. I will go to clubs for a half an hour to listen to the music and see the people, and then relocate to another club, or someplace else. I’m eclectic in the things I do, I’d say.

Gaspard—With your job, it’s important to go out and meet people. And, maybe it’s also a method for finding inspiration—seeing how the world is around you, how people dress. It’s the same for me. I can be in a club or at a party, and sit in the corner and observe those around me. It can give me a lot of ideas for my next character—to see how somebody walks and behaves.

Lucas—Do you always observe people, or do you shut off ?

Gaspard—I have a tendency to observe. When I was a kid, I could stay mute for hours, looking around me. I was a dreamy child— I’m an only child and I was in my own world. I’ve grown up, obviously, but I still like to watch what’s happening.

Lucas—It’s a good trait to be able to observe.

Gaspard—Yes, with our jobs, it’s a good trait. 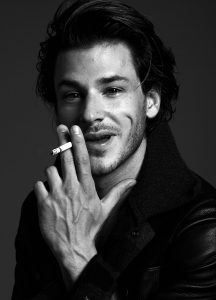 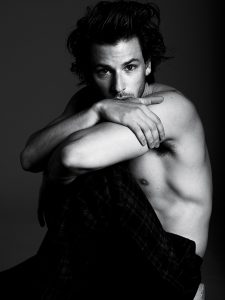 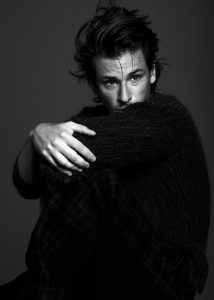 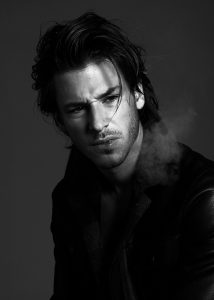 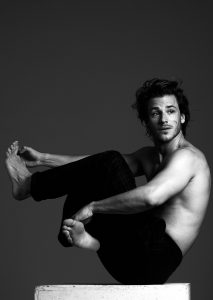