Restauranteur Jean-Marc Houmard has perfected the ingredients for an effortlessly cool restaurant, with New York’s Indochine and Acme both under his belt (among several others). It was at Indochine, the downtown restaurant of the past three decades (they just celebrated their 30th birthday last week), where he first met his muse: interior designer and Eye-Swoon.com blogger Athena Calderone, who was then fresh to New York and working as an “Indo” girl. Since those early days, both Jean-Marc and Athena have grown and inspired each other in design, art, and food.

Nick—Do you wake up early?

Jean-Marc—I don’t get up so late, but I like to have lengthy breakfasts—like, three-hour breakfasts. That’s my downtime, that’s when I don’t have to do anything.

Athena—I love that about you! I love watching you read the paper, nibble at your cookies, drink your coffee—you really have a ritual morning routine.

Jean-Marc—Some people stay in nights watching TV, that’s their downtime. That’s when I work, so mornings are my—

Nick—And you spend the summers out on Fire Island?

Jean-Marc—Yes, I have a house there in the Pines—all the way at the end, so it’s quiet—there’s trees all around so you can avoid the whole hoopla and mayhem.

Athena—Honestly, his approach to that house singlehandedly inspired my love of design! His house makes you feel like you’ve been transported to a different time and place.

Jean-Marc—You do feel that you’re far from New York—it’s really an oasis.

Athena—After seeing Jean-Marc’s house, I wanted to find a diamond in the rough, too. People don’t know that Jean-Marc did a lot of work on that house, himself! Everything from the renovations to part of the construction to building the tables.

Jean-Marc—I bought it around Thanksgiving, and we spent every weekend that winter building stuff in freezing weather. We had blue hands from having spent all day sawing and drilling outside. It’s very satisfying to see a result that you didn’t just buy from a catalog—that you built yourself.

Athena—Through that process, I saw a lot of similarities between our personalities—like how we hunt for eclectic home goods. He became obsessed with eBay as well.

Nick—Have you found anything on eBay that you couldn’t find anywhere else?

Athena—Well he found a collection of stuffed birds, right?

Jean-Marc—Yes. [Laughs.] They were already dead when they were stuffed. They had a happy life. It’s amazing, the access that has been provided in the past 15 years. Before, you really had to travel to find things, and now things from around the world are right at your fingertips. I just bought some fabric in India for a project in Nicaragua.

Nick—What’s the project in Nicaragua?

Jean-Marc—I’m helping a friend do a small hotel on Lake Nicaragua. So I’ve been going there, every month, to help him with the buildout and styling. It’s almost ready. In a couple of weeks we should be done.

Nick—We were saying earlier how nice it is to be having this conversation in Indochine, the place where you two first met.

Athena—Indochine has borne witness to many rites of passage in my life. It was my first job in New York City. It was so glamorous and so chic that it didn’t feel like work, and I got to see so many beautiful people. That was in ’96.

Jean-Marc—Almost 20 years ago! I must have picked you right out of high school.

Athena—I celebrated my 21st birthday here. I got engaged while I worked here. I went into labor here, during a dinner at the restaurant! All these really significant moments in my life seem to have been somehow surrounded by Indochine and Jean-Marc. I feel—and I’ve said it to you before—that I grew up here, and you nurtured my eye for design.

Jean-Marc—You give me too much credit. But we are very similar in many ways—we’re not showoffs, we’re a bit removed, and we have to encourage each other to get out there.

Athena—You encouraged me in unbelievable ways. I got married really young and had a child really young, so a chunk of my twenties was spent nurturing my family, and not so much my career. I knew that I had all this creativity trapped inside me with no outlet. I would always share my frustrations with Jean-Marc about finding my voice and finding my place.

Jean-Marc—But now with your website Eye Swoon, you’ve really made something out of what you loved anyway.

Nick—Do you inspire each other now?

Jean-Marc—Yes, very much so. We like the same food, we like to cook the same things—if you look at Eye Swoon, it’s all things that I want to eat. It’s bright, it’s beach-y, sunny—it’s all healthy and modern.

Athena—I think so, just like how Indochine is timeless.

Nick—Both of you must have amazing stories from this restaurant.

Athena—Oh, I have a good one! All these girls were wearing flat, clunky shoes as they worked in the restaurant, and Jean-Marc wanted everyone in five-inch heels. So he would always point out my shoes in staff meetings and say how everyone should wear heels like I wore.

Nick—I was looking at the seating chart for the 15th anniversary party of the restaurant in the Indochine 25th Anniversary book and I realized that we’ve featured almost half the people from that party in this magazine. From Glenn O’Brien to Maripol to Bethann Hardison, and on and on. Indochine is effortless in its time and style, and always attracts interesting people. It hasn’t changed very much since the eighties. It’s almost the same people! Or their children are coming now.

Athena—I also think that the lighting is pretty spectacular. Jean-Marc is a stickler for lighting. We’ll go to a restaurant and he always comments on it—if it’s too dim. I think that it’s sexy when you walk in here. Everyone looks sexy. Everyone looks beautiful. Everyone’s glowing. Besides the energy that you and the staff have created, it’s just a sexy atmosphere to be in.

Jean-Marc—At a certain age, one has to dim the lights a little. I’m very aware that after 8:30, if you want to look a little sexy, it has to be dark.

Jean-Marc—Oh yes. Everyone looks better if it’s a little dark. And who doesn’t want to look good when they go out? It’s not just about eating; it’s about having an experience. It’s about feeling good, about feeling sexy. It’s the whole package.

Athena—When I was 20, this is where I wanted to be, and now dear friends like Chelsea Leyland in their early twenties want to be here too. It appeals to everyone.

Jean-Marc—Which is great, because if it were just about nostalgia, it would be a bunch of sad sacks, but the vibrancy comes from the new generation who were being born when the restaurant opened.

Athena—I wonder if Jivan, my son, will come here when he’s older.

Athena—Me too. He already loves the spring rolls. [Laughs.]

Athena—When I choose furnishings, I like to think about timelessness and clean lines. And Jean-Marc’s philosophy of lighting has been very important for me. Indochine is a very glamorous, vibrant space, but it also feels quiet and intimate. You can have a small moment with friends here.

Jean-Marc—It’s not a new restaurant that everyone has to go to at once because it just opened. It’s kind of like a cruise ship that just sails along. There’s something comforting about knowing what to expect, especially in New York, where everything changes so quickly.

Nick—Do you have a favorite story about the restaurant?

Jean-Marc—I started here as a waiter, in ’86. Once, when I was waiting on Bianca Jagger, she shaved her armpits in the bathroom. [Laughs.] I remember one of the waitresses said during a staff meeting, “I woke up and I was really depressed. Everything was wrong in my life, but then I remembered, ‘I’m an Indochine girl,’ and felt good for the rest of the day.”

Athena—It’s true! When I arrived in New York, Indochine set the mark for what chic was, what elegance was, what sophistication was, what great food was in this world of fashion and art. It was the starting point for my taste level.

Jean-Marc—What’s inspiring about Eye Swoon are the recipes you give that don’t play to trends, but show an evolution. The crostini you had in the last recipe with grapes, olive oil, and salt—it’s so simple and perfect you just want to eat it right away.

Athena—Thank you! I get so excited about food. If I go out and I taste something that I love, on my way home I’ll stop and buy the ingredients and then put my own twist on it the next day. I don’t like to hoard my ideas, and I’m never afraid that someone will use them. I want to inspire other people. That’s really what Eye Swoon is for me—a sharing of information to see how people manipulate what I’ve created, which is always something visual. I think we all get pulled in by visuals, so if the photography, food styling, or environment is pretty, it’s going to spark something in someone else.

Nick—What’s the most inspirational project you’ve worked on?

Athena—I’d never picked up a camera in my life. I’m afraid of electronics, so I would always hand the camera to my husband and say, “Work this out.” I just wasn’t interested. Since I started Eye Swoon I’ve gone on a creative journey, learning Photoshop and how to work a camera, to shoot manually. I never realized I liked photographing and styling food! As far as design—my home in Montauk was an unbelievable experience—I took something that was literally caving in and elevated it. I approach design, fashion, and food in exactly the same way. I like layering textures and unexpected elements. In my home I lined the entire ceiling with rope—which you can buy at the hardware store.

Athena—Now a lot of people are using rope, but this was four years ago. And with the crostini last week—you can find grapes anywhere, but by roasting them and adding rosemary and sea salt, you’re elevating them.

Nick—What are you working on next?

Athena—I have so many ideas—I don’t know exactly what is going to happen next, but I’d love to do a book or consider some TV.

Jean-Marc—The wallflower is definitely out of the cocoon.

Jean-Marc—Amazing—of course you should be on TV.

Athena—I’d love to give it a go. I just filmed a segment for NBC’s Open House in which I gave a tour of my house, so we’ll see…

Jean-Marc—The possibilities are open for the New Year. 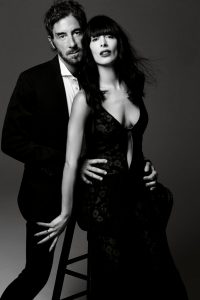 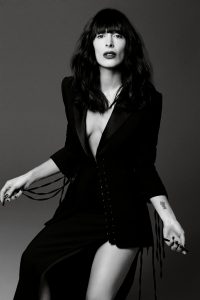