When Lucy Lippard, one of Printed Matter’s founders, made her call to arms, “The art world needs a Gutenberg Revolution,” she could not have predicted an era of publishing dominated by print on demand and online retailers. But, the digital age has only strengthened the need for an alternative space dedicated to artists’ books, partly playing out in collaborations with Artist Space, Dia Art Foundation, Walker Art Center, Art Basel Miami Beach, MoMA PS1, and—starting next year—The Geffen Contemporary at MOCA. Throughout Printed Matter’s radical history, the institution has remained true to the vision of its nine founding members, doing more than selling books and introducing new modes of production, dissemination, and dialogue.

Opening tonight, December 12, NYU’s 80WSE gallery charts Printed Matter’s history in “Learn to Read Art,” from its formation in 1976 to present day and into the future, when it will relocate to its fifth and largest space, a building designed by Handel Architects near the High Line.

“The book is multidimensional. It has limitless possibilities of combinations, surfaces, planes, spaces, and architectures to explore and investigate.”

A subject so vast in scope resists a chronological survey. A multi-layered timeline presents historical documents, photographs, various ephemera accompanied by curatorial wall text and an array of artists books to be held and explored. Printed Matter’s first publications, including Martha Rosler’s now-iconic book Service, Douglas Huebler’s Secrets, Tony Shafrazi’s Moogambo, Kathy Acker’s The Childlike Life of the Black Tarantula, and Jon Hendricks and Jean Toches’s GAAG : The Guerrilla Art Action Group are in vitrines and for sale in the pop-up shop. Holding court and creating artists’ books on site are emergings talents including Juliana Huxtable, Josh Smith, and the zine collective Research and Destroy.

“Among other things, the book is a multimedia, commutative device,” explains Printed Matter acting executive director, Max Schumann, who co-curated the show. “[The book] is multidimensional. It has limitless possibilities of combinations, surfaces, planes, spaces, and architectures to explore and investigate.” Similarly, Printed Matter functions as an enclave for artists, democratizing and diversifying production. “Digital space does not replace or displace public spaces,” Schumann adds. “A lot of the projects and practices that are done using physical print also interface with digital ones to produce tactile objects that can be exchanged. You need physical communities for this exchange.” 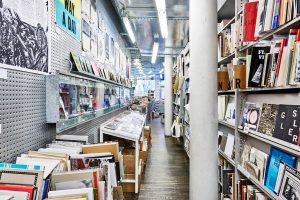 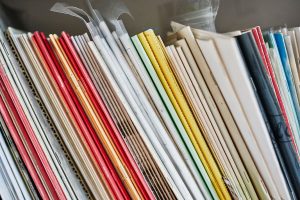 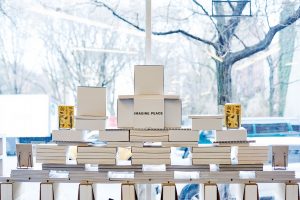