Everyone knows you for your films, but how long have you been making sculpture and photographs?

I’ve had many shows, I was represented by Colin de Land at the American Fine Arts gallery starting in 1994 until when he died. And I had a museum show at the New Museum before it was in its new space, which traveled to Winterthur, then to the Orange County Museum. So I’ve been doing this since 1994 or 1995, and I’ve aways kept it separate.

Your work often explores the dichotomy of high and low and different cultural hierarchies; do you see these boundaries shifting today?

Yes, and the business behind it too. I think when Hollywood tries to do it they generally do it badly, not always. It’s led to unfunny $80 million gross-out comedies. If you ever look like you’re trying too hard, its just shocking, not witty, and doesn’t change how you think about anything. I think it doesn’t work. It’s a tough line because it keeps shifting. I hope I’m doing that, but it’s up to others to tell me if I’m doing that successfully.

Is it still possible to be subversive in the same way today?

Subversive is the best of “you” you can get, so I would never say that I have it. If I’ve ever done a subversive thing, it was Hairspray because it’s playing in every public high school in America. Two men sing a love song to each other; and it encourages interracial dating – I think no one seemed to notice that it’s against what many people seem to believe in. That was maybe the only subversive thing I ever did!

Subversive is the best of “you” you can get, so I would never say that I have it. If I’ve ever done a subversive thing, it was Hairspray because it’s playing in every public high school in America.

What are your thoughts on the emergence of celebrity culture in the art world, and how the art world is turning into Hollywood?

That’s what I address in the show. It’s the only obscenity left! It’s gotten worse as far as the art world’s contempt – not with me, I think thats because of Colin de Land. I stayed with him, a dealer so uncommercial, he was the only dealer who, when he had the dinner for collectors after the opening, he would split the check 42 ways and collect the money for each person! I think Colin was a great help in that, and it’s not my position to critique any other artists in that. It’s the only thing I can’t fight with that’s there – that’s why I kept it separate. [Celebrity’s] the only obscenity left in the art world. That’s why I called the show Beverly Hills John!

What is “careercide” with dignity?

Wolfgang Tillmans asked me, “When are you going to stop? When is it enough?” It brings me great happiness to write a book or do an art show; it’s another way for me to tell stories, that I have to put out my sense of humor and hopefully make people laugh. That’s the only way to get people to change their minds. “Careercide” is trying too hard, it looks desperate. That’s “careercide.”

How do you describe Kiddie Flamingos?

Its a video art piece, a 74-minute table read. I completely became my own worst enemy, a censor, and rewrote the G-rated version and had all children read it, who of course had never seen the original. There’s something very perverse about it because the audience knows the real movie, but a child would certainly never say something like “Come get what was promised you…in the holy vows of matrimony.” No child would ever say that! It should definitely be in an art gallery, not a movie theater.

Friends and their kids, because it’s not a movie — it’s a table read. The parents all came to my house and the kids had tryouts and readings to see if they can do it. I get along with kids; kids are always very friendly to me! I had a little cast screening last week at my studio, and the kids were laughing. Like anybody, children get nervous when they see themselves on film. Not about the parts, but when they were saying love stuff, some of kids would cover their own ears because they’re kids!

Each actor wears one thing that suggests his character. The kid that plays Divine has a bald cap and a women’s wig with the eyebrows, but he’s not feminine — he went and played a football game after he did the reading! He was totally unnerved, nonjudgemental; he was great, a very sweet kid. I’m happy with how it turned out. Its a new kind of G-rated perversity, which was what I was trying for because I don’t think there was such a thing until now, personally.

I have to ask you about Justin Bieber. There’s a new botoxed Justin in the show.

Justin right now is trying to reinvent himself too, I love that he wants to be Bizzle. When I’m in a bad mood I just say BIZZLE over and over.  He has to reinvent himself at such a young age, and it’s really scary when you get that famous that young and have to do that when you’re not even 21 yet.

What advice would you give to Justin?

He doesn’t need to ask me for advice, he’s incredibly talented. Take some risks – which he does! Keep doing what you’re doing, I’ll be your last fan. He should play a junkie or something in a movie. He’d get an Oscar nomination. Just something completely against type: Do a duet with me! A singing rap duet! Bizzle and Whizzle.

I wanted to ask you about the Ansel Adams series in the show, Cancel Ansel.

Isn’t it contemporary art’s job to wreck things? Ansel Adams is about the complete other side of photography. He is how photography first became to be considered art, that type of photography, when it was considered not. Now of course, the photography I do has nothing to do with that kind of photographic skill. My pictures are actually not very skillfully taken off TV screens, so I think I’m on the other end photography-wise. But oddly, I do like his work, and I always try to imagine those beautiful scenes and where they are today. It’s not so hard to imagine that maybe now there are fat people swimming in those lakes, and maybe there is a cruise ship there or there, all the things of blight I put into those beautiful shots. It is contemporary arts job to wreck something that came first. 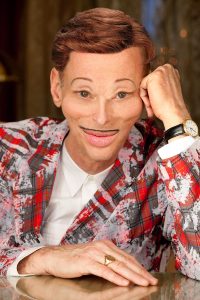 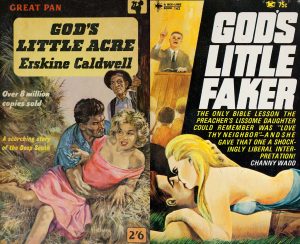