We’ve been struck by the number of artists investigating power and politics, processing the news and media, and synthesizing it in their work. We decided to devote this issue to them. The artist AA Bronson explains in “Printed Matter: An Oral History” that artist publishing—like many forms of creative expression—is very much linked to the idea of resistance. We wholeheartedly agree.

Nowhere is resistance more visible than in the work of artist Zanele Muholi, who believes that “You can’t change the laws without changing the images.” Muholi, who explores the roles of gender, visibility, and power in South Africa, has turned the lens on herself in a striking series of images that straddle the line between art and fashion. On the opposite side of the world, photographer Harley Weir explores what it is to be masculine in Russia—a country whose political climate and propaganda laws have left many marginalized—in her fashion story “A War Has Many Battles”.

We wanted to experiment using past newspaper headlines for the titles of this issue’s fashion stories. We are acutely aware of the media’s need to title events and sell stories through neatly packaging headlines, without always clarifying their context. Newsworthy stories have the power to spark change and inspire action in others; and such headlines hold more importance than just ink on paper or mere pixels on a screen. Taken from major newspapers, they serve as a lens through which one can interpret a story—they can also be distorted leaving lingering questions as to the headline’s meaning and intent.

Skepticism, too, can be seen as a form of resistance. Seemingly shying away from the use of new technologies, a younger generation is emerging with a strong voice and point of view, allowing technique and process to take center stage, ahead of over-retouched images. This is reflected in the aesthetic shift happening in the fashion industry today, and nowhere can this be more readily seen than in the works of artists Tyrone Lebon, Harley Weir, and Coco Capitán, all of whom shoot film for its distinctly un-digital aesthetic. And in a sense, creative expression comes from this internalized resistance. Well, this is the news of the future. How do we move forward? 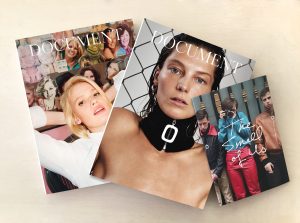