Dimitri Dimitrov is a venerable institution. He has been a fixture on the Hollywood restaurant scene for more than 20 years. And now, as the maître d’hôtel at The Sunset Tower Hotel, you can find him most nights greeting Julianne Moore, George Clooney, Elon Musk—the who’s who of Hollywood—at the Tower Bar. Somehow Dimitri always just knows exactly what his clients’ needs are, catering to exactly what they want. He has this charm about him—the way he smiles, the way he clasps his hands close to his chest, his Eastern European accent—and a way to make anybody feel like a VIP. He is close to many of his clients and counts Johnny Depp and Sean Penn as friends. Tom Ford even passed along Dimitri’s name when he heard the hotel was looking for a maître d’. The two catch up below, and ten years later, Dimitri finally asks Tom why he recommended him for the job.

DIMITRI DIMITROV—Do you remember when we first met?

TOM FORD—Absolutely. You were the maître d’ at Diaghilev and were being followed around the room by a sterling silver cart filled with different caviars and vodka, as well as three very effeminate young men. You immediately made a great impression on me, and I have never forgotten it.

DIMITRI—Diaghilev was this amazing little Russian-style restaurant—lots of caviar— a five-star place, the number one in service by Zagat year after year. It was a place for people in the know and the restaurant of choice for many famous people. Actually all the Diaghilev clientele, they’re regulars at the Tower Bar today. You were a part of the regular clientele. The first time we met was in the late 90s. I was managing the restaurant. I took your reservation, and gave you the best table for six. You had just been promoted as the creative director of Gucci. I made you feel like a tremendous VIP, which you were. You had many dinner têtea- têtes there.

DIMITRI—A long time ago. The first restaurant I worked was called Inigo Jonesin Covent Garden in London. I was a teenager, 18 or 19. I barely spoke English. I was in awe just being in the middle of royalty: The Rolling Stones, The Bee Gees. It was amazing. Then I moved to Canada to be a part of the Ritz-Carlton in Montreal. That was in the late 70s to the 80s. I was a part of an amazing team that served Pierre Trudeau, dignitaries, and was a part of the Queen’s service. My maître d’ had come from Claridge’s in London. My foundation in old school service was set there.

TOM—What did they teach you?

DIMITRI—An endless list: serve from one side, not from the other; how you hold your hands; the language you use with a guest; on and on. This all goes back to the rules set by the Lausanne Hotel School. You always go back in time when you talk about service. During the long Montreal winters, I dreamed of California and being a part of Hollywood—exactly what I’m doing at this moment.

“Being well dressed and well mannered is the most important.” —Dimitri Dimitrov

TOM—So you came to California.

DIMITRI—When Diaghilev closed, I became in charge of the L’Ermitage hotel. One afternoon, I received a call from Jeff Klein, [the owner of the Sunset Tower Hotel]. He said, “I would love to have a cappuccino.” I didn’t know what he wanted, but said, “That’s my favorite drink, I would love to.” Apparently, the previous week he had had a dinner with you and Richard Buckley. The hotel and the restaurant were almost ready to reopen, but he had nobody to lead: “People are almost impossible to find. I’m giving up.” You then wrote my name on a coaster and slipped it to him, telling him to look for this man named Dimitri. That was the beginning in 2004. Time is flying, oh my god! Why did you recommend me for the job at the Sunset Tower Hotel?

TOM—I think that one of the key factors to great success at a restaurant or bar is a maître d’ with enormous warmth, style, and originality. You have all of these attributes in spades.

DIMITRI—When I was a kid, before you’d walk out of your place, you thought about how to get dressed and how to present yourself to the world. You didn’t put things on and go out without thinking. Being well dressed and well mannered is the most important. Today’s young kids, they have considerable intelligence and they may be technically savvy, but yet they come really sloppy in a t-shirt and jeans and a lack of manners. It really bothers me.

TOM—For you, presentation is important.

DIMITRI—Each night at the Tower Bar, it’s less about us. We try our best with the service and food, but the difference from night to night is the audience, the clientele. The blend of guests and how they interact makes many nights magical. And how they dress. We’ve created a mood and atmosphere, a civilized mood. I’m in charge of services and recognizing the needs of the clientele, so it’s never ever about me. I like it, but it’s just to create a mood that the guests enjoy and we cater to all their needs. The Sunset Tower has this tradition and history that comes from the building. By being in the Sunset Tower, you’re in the middle of Hollywood. It captures the vibe and mood of Hollywood in just one night.

TOM—What is the mood of Hollywood?

DIMITRI—The mood is motion pictures. I don’t mean just the actors, but also the studio heads, executives, the writers, the film directors—the creative part of Hollywood in all aspects—and the agents too. Bryan Lourd and Kevin Human are tremendous VIPs. They are at CAA, an agency that manages a lot of the talent. As soon as I receive a call from Bryan Lourd, he has his table, and there aren’t questions asked as his guest could be George Clooney, Sean Penn, or Nicole Kidman—it could be anyone! The Sunset Towers were made as apartments for rich clientele, with butlers. Just being in the corridor gives me goosebumps. Howard Hughes had four apartments. He had four mistresses living here. Ava Gardner lived here. Frank Sinatra was running around the place. Before Jane Russell died, she was a regular. She came for the nostalgia. One day, a little boy was describing the rooms upstairs to
her, and she was rolling her eyes thinking this kid is telling me what’s up there. Jane Russell was one of Howard Hughes’ muses and mistresses who lived there [laughs]! Back then the men were much better dressed. I can imagine you at the Sunset Tower then. Who would you have loved to have met?

TOM—I would like to have had a quiet romantic dinner with Carey Grant.

DIMITRI—Why do you like Sunset Tower? What draws you here when you come to LA?

TOM—The very flattering lighting and of course, you. 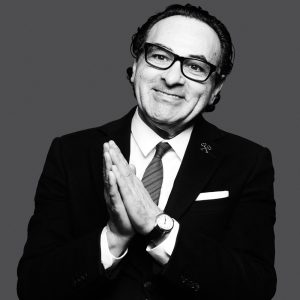