When Abigail DeVille was faced with the challenge of creating the setting for Adrienne Kennedy’s play She Talks to Beethoven—the story of an African-American woman who seeks solace in the spirit of Ludwig van Beethoven after the disappearance of her husband, while living in post-colonial Ghana in 1961—the artist turned to the curvilinear form and title of Richard Serra’s Intersection II. Instead of using weatherproof steel, DeVille reclaimed plywood theater flats, along with various other debris, creating a sculpture with a curved, grid effect. “It was tying in the story of Beethoven coming and talking to an African-American expat in her house, in her bedroom, in her chamber—and having four long conversations about her, about his impending deafness, and her fears of her husband being dead,” explains DeVille.

The sculpture, which doubled as DeVille’s contribution to the Hauser Wirth & Schimmel exhibition, also has a role in the collages the artist submitted for this portfolio. Made with stills from the play, DeVille thought about Kennedy’s narrative and the conversations that take place between Beethoven and the protagonist, and the various perceptions of being both in one’s own body and as an observer outside of it. “I was thinking about bodies moving through space, memories, piercing through the material—different kinds of time travel,” says DeVille, who wanted the different layers to piece together various elements of the story.

Abigail DeVille’s exhibition, Only When It’s Dark Enough Can You See the Stars, was on view at The Contemporary, located at the former Peale Museum, 225 N. Holiday Street, Baltimore, Maryland through June 11, 2016. 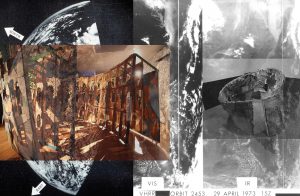 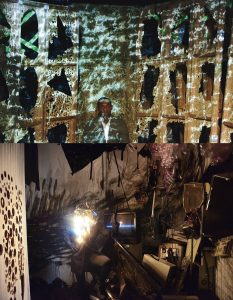