Five in the morning is a time that delicately balances between what seems to be the end of a restless night and the beginning of a new day. Designer Léa Peckre’s obscurely titled Fall/Winter 2016 collection, <<5 am>>, explores this very idea of “being on the cusp,” drawing from the strength of womanhood and the power that sisterhood provides, with an artfully restrained take on femininity that is graceful, self-aware, and quietly confident. While Peckre is Paris-based, her first campaign, shown above, is a carefully considered output lensed by Belgian artist Pierre Debusschere, and is the result of their slow-burning, collaborative relationship that is deep-seated in the creative communities of Brussels. Having met in 2008, Peckre and Debusschere were part of an alliance of young local artists communing at 254forest; Debusschere’s ongoing studio where they used the space to discuss interests and aspirations. There the duo also bonded over a shared fascination for religious iconography and the work of the Flemish primitives that influenced Belgian aestheticism in particular. Reunited to create imagery for Peckre’s sixth collection, the artwork for « 5 a.m » is a celebration of Peckre’s woman. In Debusschere’s words: “a timeless and naturally beautiful state of being herself.” 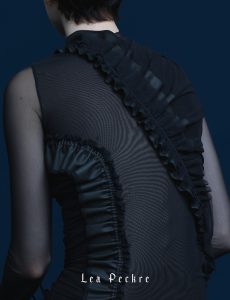 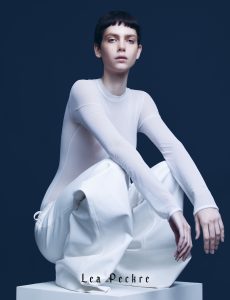 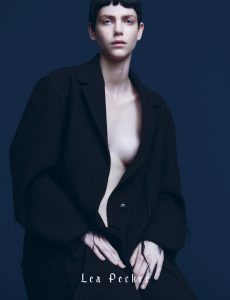