The first hint of Virgil Abloh’s plan to rethink female business attire for Off-White’s Spring/Summer 2017 collection came in the form of its invitation: a fictional card with the name Katharine Parker, the antagonist of the 1988 film “Working Girl,” on it. Appropriately, it was the jet-setting creatives who fly between New York, LA, and Paris who would inspire the line’s runway event. “They’re not bound by anything,” says the designer. “They’re actually very free. They’re empowered, they’re self motivated, and they’re strong. I wanted to do a collection that celebrated that.” In a mix of sporty, yet refined high/low looks: traditional shirting full of ornate, romantic ruffles—at times falling off the shoulders—paired with denim bottoms. Suit jackets were sexy and asymmetrical. Trackpant trousers, hoodies, and tanks completed the athletic offerings, while ruffled silk mini-dresses added an upscale allure. Abloh’s masters training in spatial design shined in the form of graphic, geometric prints. “The root of the brand has always been architecture—that’s what I’m trained in: the Bauhaus, [Le] Corbusier, Mondrian—I look at graphics in that spirit,” he says. Strong, wearable and cool, Off-White Spring/Summer 2017 exudes the spirit of the modern-day working girl indubitably. – Ann Binlot

When Clare Waight Keller moved back to England for the summer, she gained a new perspective on France. “You start to look at things in a fresh way. I wanted to change the Chloé girl this season—to move her into something new,” says the designer after the house’s Spring/Summer 2017 show, citing French style as the collection’s inspiration. As vague as the concept may seem, indeed, it was about that je ne sais quoi that the French exude so effortlessly. “It’s what I’ve absorbed living here for the past five years,” she offers,  “It’s interesting when you suddenly put some distance between things.” This season’s Chloé girl had a new attitude with a sexier, minimal heel, strapped diagonally around the ankle. The clothes had an ease about them; it was all about the flou, “flow,” while big bows hung off the shoulder, both reflecting beauty and comfort. “There’s a real ease to it, and that’s what I wanted to portray, even with the music,” she says, referring to the 70s soundtrack that included “How Deep Is Your Love” by the Bee Gees. “Guilty pleasure music, that’s what I call it,” the designer smiles.  – AB

It was with a bit of humor that Simon Porte Jacquemus—the young, buzzy fashion designer who’s made a name for himself with his fresh, contemporary Parisian wear—looked back to childhood in his country’s sunkissed provinces as inspiration for his brand’s Spring/Summer 2017 collection. Rather than reverting to full-on costume, though, the designer used these moments of fashion nostalgia to yield a romantic re-contextualization of traditions from the South of France for the present day in billowing shoulders, extravagant necklines, and cropped summer pants. Not without his signature elements, oversized details and geometric blocks, the collection follows Jacquemus’ own emotional tour de france.  – Joshua Glass

When Glenn Martens designed the Spring/Summer 2017 collection for cult favorite Y/Project, he didn’t have a specific narrative in mind. Instead, he took various elements from history and underground subcultures and used them liberally to form a recipe, or collection, rather, that exuded the eclectic DNA of the brand. For its runway show, Martens reminded the audience not to take fashion too seriously by parading the models down the runway to whimsical 60s elevator music. “We just put it all together to make a big melting pot and to try to create something new out of it,” the designer explains.“It’s a bit like Marie-Antoinette on acid,” said Martens, viz, rich velvets, billowy bell sleeves, and cascading gowns torn apart and reconfigured for a deconstructed yet formal feel. The Belgian designer recalled his youth through colorful bomber jackets and retooled sweatshirts. “I obviously wanted to have more of the streetwear, as we always want to because we’re kids of the 90s. We love to go party, we love to go clubbing, so I want to dress people like we are,” he says. Denim hot-pants and cowhide bustiers added a western touch, while new riffs on classics like the trench and the St. James shirt—the latter a feature in the brand’s last menswear show—charmed the traditional looks. While dizzying for some, for Y/Project the mashup of various references made perfect sense. – AB

Vejas Kruszewski may only be 19, but the fashion wunderkind has accomplished things that some designers can only dream of: The Canadian designer, one of eight finalists in the 2016 LVMH Prize competition, made his Paris debut this fashion season. With three collections under his belt already, Kruszewski says he’s defined his ethos. “We’re outlining the values of the brand in three words: futurism, abstraction, and utility,” he explains during the label’s presentation. For it’s inception, the barely-legal teen took to Pinterest to cull through vintage sewing patterns from the 60s to discover the pattern for Cristóbal Balenciaga’s famed cocoon coat, turning it into his own by changing the sleeve, adding a denim patch pocket, blowing up the Peter Pan collar, and producing it in gray suede. Altogether, romantic edge and workwear merged in a way that derived purely from Vejas know-how—elastication, zigzag stitches, and darts hidden within the garments to give the clothes their shape, viz, an off-the-shoulder white dress provided a little edge from detailed stitching, and a leather shearling jacket took on a whole new shape—the Spring/Summer 2017 collection exuded the popular contradictions of high/low aestheticism designers are proffering clientele these days. For Kruszewski, however, “It’s [about] putting forth an idea, and then finding a way to work it in people’s lives.” – AB

Can attitude join romance without combating its delicate allure? That was the recurring question Kym Ellery seemed to ask herself for Spring/Summer 2017. The line, a poetic assemblage of pink and black, glitz and glam, was a rebellious detour for the Australian designer known for her sculptural pieces and ready-to-wear flare, featuring textural leathers married with outspokenly feminine sensibilities: ruffled sleeves and chunky, golden boots. Bold patterns and glossy bright pinks sat overtop lace-up thigh-highs; it was an Ellery girl gang with the gloss of fiery passion. – JG 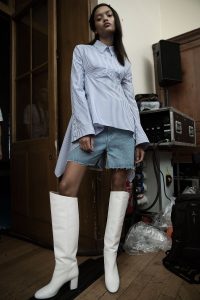 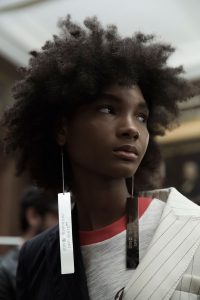 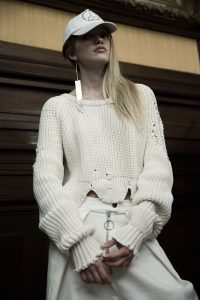 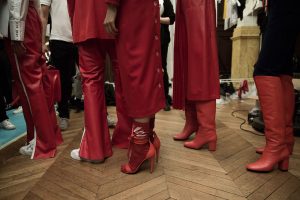 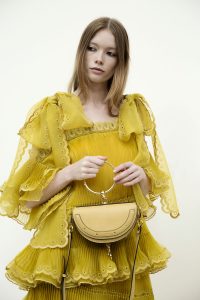 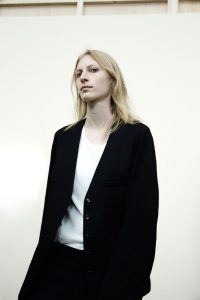 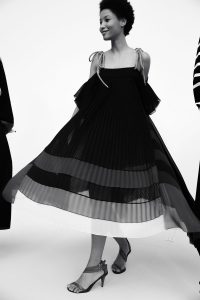 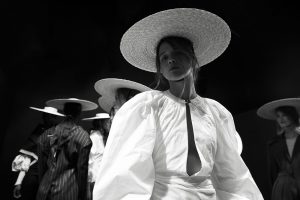 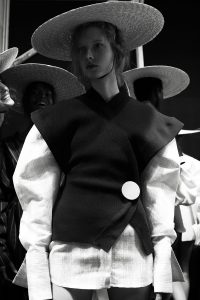 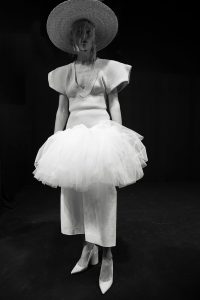 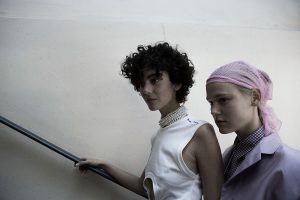 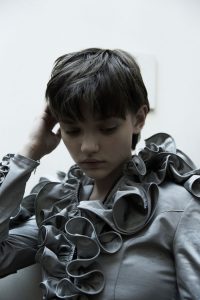 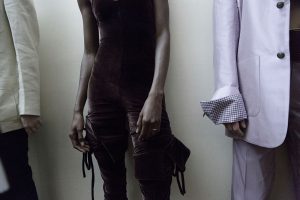 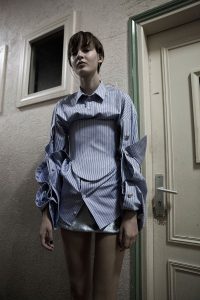 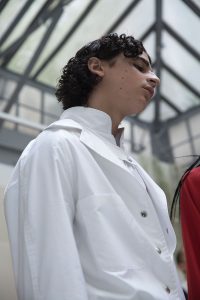 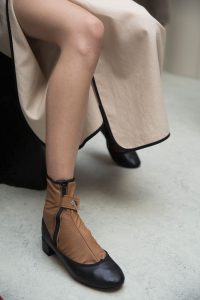 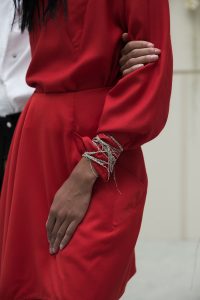 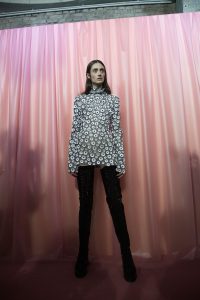 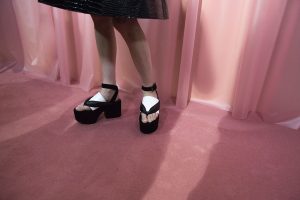 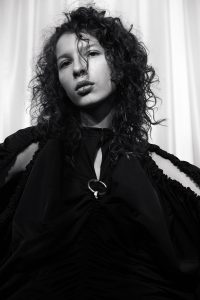 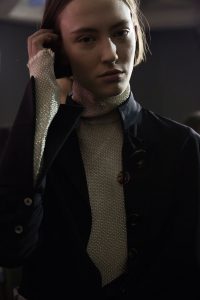