Back in 1610, Galileo Galilei discovered Jupiter’s sixth-closest moon. It was named Europa, after the Phoenician noblewoman who was pursued by Zeus, the Greek equivalent to the Roman god Jupiter. It’s about the size of earth’s moon, albeit a tiny bit smaller, and has twice as much water as the planet. Scientists have speculated that there is a possibility for extraterrestrial life because of the idea that a water ocean may exist beneath its silicate rock and ice crust.

No spacecraft has ever landed on Europa — until last September.

It wasn’t a mission led by NASA, or Russian space program Roscosmos State Corporation, or its Japanese counterpart, JAXA. The artist Tom Sachs, who had landed on Mars back in 2012 at the Park Avenue Armory in New York, was going on another journey through his space program, this time to Europa via the Yerba Buena Center for the Arts in San Francisco.

Before the mission, Sachs explained to a group of journalists that they may “send a tiny submarine to take pictures and maybe abduct a crater surface creature.” It might sound politically incorrect, but he said that “it’s important that this exhibition represent who we are as humanity.” He added that he also wants to do the right thing. “We don’t want to fuck up someone else’s planets with our earth bugs. We’re imperialists, so we go to other planets, other worlds. Europe entered the new world with all its bacteria, guns, and iron axes and it polluted the aboriginal cultures of South America and West Africa, abducted individuals, and forced them into slavery so that it could extract natural resources of the Americas.”

Born in 1966, Sachs’s fascination with space began when he was a child—he was 3-years-old when Apollo 11 landed on the earth’s moon in 1969. “I’m interested in nostalgia,” he said. “I love the America that was built to defeat the Nazis. That ended in 1974, so some of the themes that we’re working with here reflect some of the politics of the era of Camelot or of an industrial America, literally conquer the world and into another planet.”

And then, he was ready to pay Europa a visit. “Let’s go to the surface of Europa,” Sachs instructed. “Follow me. Welcome. On this surface you’ll see the landing module…” Inside the cupboard doors tools, sharpies, and rolls of tape were perfectly knolled—Sachs made a viral short film about knolling, which spreads the mantra at his studio: Always Be Knolling. “Knolling” is a term created by Andrew Kromelow, a former janitor at Frank Gehry’s fabrication shop, to describe the process of arranging things parallel to each other, or in 90-degree angles, as a method of organization. In another section, sat a bookshelf filled with titles like “Sex and Destiny” by Germaine Greer, “For Victory in Peaceful Competition for Capitalism” by Nikita Khrushchev, John Milton’s “Paradise Lost,” “The Odyssey” by Homer, Marcel Proust’s “Remembrance of Things Past,” Charles Darwin’s “On the Origin of Species” and “The Complete Works of William Shakespeare.” At the other cupboard in the landing module was a stash that consisted of a row of Stoli Vodka, Jack Daniel’s, and packs of Marlboro Reds. On its right were tin cans with the label “Beans” crudely written on them, and of course, a can opener, and to its left, a small amount of candles. In one corner sat a space helmet with a golden shield.

About 15 feet away from the landing module was a sculpture by artist and designer Isamu Noguchi—a reference to Sachs’ exhibition at Noguchi’s namesake museum in Long Island City, Queens earlier this year—made from a piece of 4.5 million-year-old basalt wood that was found, then cut in half by a people at a quarry, then found by Noguchi, who polished its narrow passage. “You could say the astronauts found this on Europa, or you can say it was on Europa and it called to them in 2001 and said come check us out,” said Sachs. “Or maybe you could say these astronauts were bad ass colonialists and they brought this stone sculpture that weighs 5,000 pounds to Europa as a Mayan silo, as a power structure that said, ‘Hey don’t fuck with us. We built this road and we own this land.’ I’m not going to say which one of those narratives is true, because I don’t think it matters. They’re all possible interpretations.”

Sachs went through a set of glass doors labeled with the words “Bamboo Courtyard,” and took a Sharpie out of his pocket, crossing out the text and writing “Europa Yard” above it. Sachs explained how he and his team froze the water in the pond—the same method that air condition units use to cool air. “The astronauts will walk on the surface, plant a flag, drill into the crust of Europa, to hopefully discover and abduct real life Europans,” he said.

Although the flight time to Europa from Earth is an estimated six to seven years, that morning it was a matter of minutes. Later that evening, Sachs’s crew would get there in one hour with Sachs leading the landing from Mission Control. The following day, they would venture to Europa again during a five-hour performance. Sachs explained that the slower missions, and anything really, yields the most results. “Science is slow,” he said. “It takes time. Everyone wants the answers right away, but the reality is it takes time to figure stuff out. You can’t rush it. You can’t do great work without taking the necessary time.” Sachs’s team of astronauts, which seemed to consist of around a dozen members, moved precisely in tandem, as if they had rehearsed it many times before. Someone else who was there said that it was impromptu. Sachs explained that humans work better in teams. “Together we can achieve more than we can individually because human beings specialize,” he said. “Together we specialize, and together we conquer other worlds.”

Sachs later explained the reason for the art-performance-cum-space mission’s success. “By executing these details to an extreme degree, the experience for us becomes authentic. In other words, this space program is real. This isn’t stagecraft. These rituals that we’re performing are real for us. There are real stakes.” He did, however, maintain that it was all about the show’s visitors, though. “I think it’s important that you make your own judgments about this,” he said. “What matters is how you see it and what it means to you.”

Tom Sachs’s “Space Program: Europa” is on view at the Yerba Buena Center for the Arts in San Francisco from now until January 15, 2017. 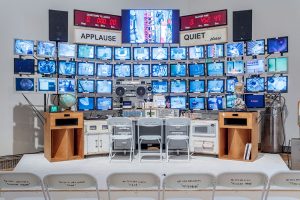 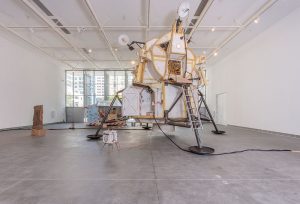 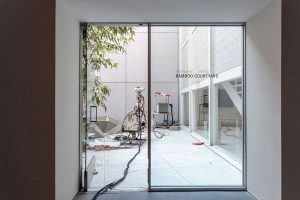