In the way that the light bulb transformed the 19th-century Parisian art scene by making it the City of Light, or the assembly line transformed the 20th-century New York art scene, so too is the internet—that wooly worldwide wonder—transforming the 21st-century art scene in Havana and, through it, the entire island of Cuba. Although it is not an experience that anyone has ever seen before, and certainly not the internet the way it was intended.

Begun as a protocol for military communication readiness, then unspooled for public consumption first as the Information Superhighway of the 90s and on through the clicks-and-likes marketplace of brands to what it is today, the internet has always contained multitudes. And exponentially more. Every two days, we create as much information as we did from the dawn of civilization through to 2003, former Google CEO Eric Schmidt told a crowd at a tech conference—but that was way back in 2010, when Twitter was still relatively novel. A lot has happened since then. Notably, the booming internet presence in Cuba.

Last year, the Cuban government created public WiFi zones where locals swarm like ants on sugar. Verizon and Google are ramping up their presence as well. But internet access is still scattershot and expensive (two Cuban convertible pesos per hour for use, keeping in mind that Cuban salaries are, on average, 20 Cuban convertible pesos a month). For five Cuban convertible pesos a week, more than 90 percent of the island’s 11 million inhabitants opt for an alternative: El Paquete  (“The Packet”), a terabyte-sized hard drive—a kind of pocket internet—from which they can download webpages, magazines, movies, books, music, viral videos, and all manner of digital art. Sitting in the middle ground between legal and illegal, consider it the Cuban version of our Cuban cigars. It’s how Cubans keep abreast of the myriad of “Games of Thrones” plot twists, all to the tune of an estimated $4 million US dollars a month. (The exact number is unclear due to the inherent rhizomatic nature of its use.) It is the largest private employer on the island though, second only to the communist government itself.

“Artists from every nation can participate, either with individual projects or collective ones,” reads an invitation from the art project by Nestor Siré, a 28-year-old video artist from Camagüey who, in a way, is Cuba’s shadow minister of art. He is the artist who has been a part of El Paquete the longest, and he is treating it as a work of art all on its own, having added a folder to the mix called “!!!A R T Section.” which includes “the F O L D E R =gallery=.” It continues: “This space has a monthly frequency with a maximum general weight of five gigabytes, and it is under the rules of the Weekly Package (NO pornography and NO openly political subjects), although we are open to investigate its limits.” The folder’s current iteration was inspired, in part, by the work of Lázaro Saavedra, a prominent Cuban contemporary artist, whose “Galería E-mail” archived and dramatized early online communication between Cubans (picture the AOL days of the US internet). Its weekly manifestations coexist in the real-world Cuban art scene through the work of the likes of Yonlay Cabrera—a young, net art artist who presented “Debugging Nauta – Registros de error #Investigación ciudadana” (“Debugging Nauta – Records of errors #Citizen Research”), a work that analyzed the errors and social impact of the Nauta WiFi service provided by the governing state—new media literary group PAQUETE LITERATURA (“Package Literature”), and journalist, poet, and filmmaker Yoe Suárez. On screens and in the streets, El Paquete is giving Cubans—to employ another online trope—a second life.

“The internet in the rest of the world is a private moment, almost like hiding in a cave with a little scrap of fire, but in Cuba it is a public phenomenon.”

Siré compares it to the difference between getting water from a kitchen sink and getting it from a public well in the town square; there is an added social dynamic ripe for the spread of ideas. “El Paquete is our national conversation,” he says. “The internet everywhere is about information. But in Cuba it’s about information interacting with freedom. It is almost like performance, like a movie where we don’t know the ending.” He is, like much of Cuba, in its current crux, daring a radical take on conventional wisdom: his aim is not to give Cubans a fish or teach Cubans to fish, but rather to get Cubans sharing recipes of what to do with fish. “The internet in the rest of the world is a private moment, almost like hiding in a cave with a little scrap of fire,” he says. “But in Cuba it is a public phenomenon. If you want to watch that video or play that song or have that video conference, you are doing it in the street, next to your neighbors and strangers. It is a unique phenomenon.”

In conversation, even in Spanish, Siré has a habit of calling everything a “phenomenon.” Such is the tongue-tied curse of living in such interesting times. He feels no Belle Époque wistfulness for the Hemingway 30s or the protest-heavy punkish 80s. He is taking the transformational power of the United States’s softened stance on its 56-year embargo and amplifying it in concert with the way the planetary culture—not just Cuba—is being consumed by the transformational power of the internet. He knows it can affect visual art beyond memes and other viral drivel. He has partnered with Julia Weist, a New York artist with a background in library science, at the Queens Museum for a run scheduled from September 2017 to February 2018 during which they’ll exhibit a year’s worth of Paquetes, not unlike various other exhibitions and pop-ups themed on the quantified self—a grocery store made of all the food and drink packaging an artist consumed in a year, for example. But the totality of the work has the power to become something wholly different, as with, say, the jump from Charles Dickens’s serialized chapters in newspapers to holding one of his whole novels in hand. “Many Cubans jumped straight to the web of 2015, missing the early history of the internet,” says Weist. “If you had skipped from dialup and AOL to Facebook and Netflix, would you know where to dabble? It’s natural for them, but what’s interesting is that they’ve been naturalized to the internet differently.”

These seismic shifts of embargo meeting embrace have unlocked two important movements. First, in the digital realm, Cuban artists and everyday Cubans who are so familiar with recycling, repurposing, and making do with meager materials are discovering something almost antithetical to the communist tenet of sharing: unlimited resources. The new era may see a boom in the scale of art not seen since the first wall paintings of the post-war art scene in New York in 1945. But second, and in many ways much less expected, Cuban art is moving away from grandeur (as with Alberto Korda’s iconic “Guerrillero Heróico” photograph of Che Guevara taken in 1960) and counterculture (as with 1981’s Volumen Uno exhibition, which not only changed how Cuban art looked but also how it was promoted and exhibited). The unlikely hero of Paquete’s influence now is Cuba’s mundanity, the poetry of its everydayness (as with Siré’s compilation of “for sale” signs, which bring to mind Andy Warhol’s “200 One Dollar Bills” or Ormond Gigli’s “Girls in the Windows”).

Confident he is living in Cuba’s golden age, Siré is remarkably present of mind. “I approach the happening,” he says, “unveiling it as it is in its present state, trying to figure out exactly how it exists within the social scheme.” He hopes his work will get Cubans to see their lives in these tumultuous times not as a beginning or an ending, but rather as a moment all its own. “These days, it really is a situation of truth being stranger than fiction. My purpose is to share truth and awareness—to educate. Education in Cuba in general is very conceptual. That’s what life is like in a nation built on an idea.”

My purpose is to share the truth and awareness—to educate. Education in Cuba in general is very conceptual. That’s what life is like in a nation built on an idea.

Not that he’s totally above an expected approach to the art scene. Last year, after some online sleuthing in which he discovered that Banksy had paid a visit to Havana in 2004 (as a pit stop to Jamaica), Siré combed the streets of Old Havana until he found a dilapidated version of Banksy’s “Gangster Rat.” He restored it, excavated it, dubbed it “the only Banksy alive in Cuba,” and put it on the market for $40,000—with the stipulation that whoever buys it can never take it off the island.

“I make art not just for the statement that it is [art] but also for the communication it allows,” he says. “Nobody in art should want the conversation about their work to be about the actual work. The conversation should be—needs to be—about more, about ideas and boundaries and even the next new frontiers. Only the worst artists want you to look at their work and then talk to them about that work.”

For their coming exhibition in New York, Weist is excited about the idea of a “let’s play” approach to internet use—a video merely showing people how other people use the internet. “We’re hoping to browse the weirder, outer edges of their daily routines, their relationship to the web,” she says. “The internet now—the social machine that it has become—is highly curated, so highly focused on what you already know, what you like, what they think you like. We’re interested in making work that exists outside the art world and then bringing it back for exhibition.”

In that sense, they might transcend the personal into the multi-personal, the omni-personal, and piggyback information onto the illicit Paquete, the way people might learn a dare-not-speak-its-name sexual move by watching pornography.

Siré doesn’t mind getting dirty. “Galleries are white, clean, blank, sterile. There is no sense of touch, of contact, of connecting to the art, interacting with it,” he says. “The mystery of the internet is that, because it is digital, it is not real, and yet it permits more contact with the human condition than a day out at the Louvre.” 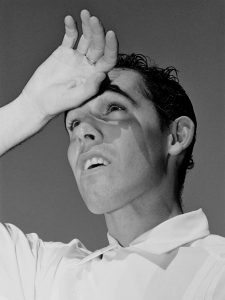 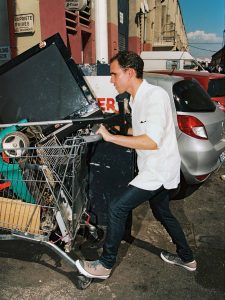 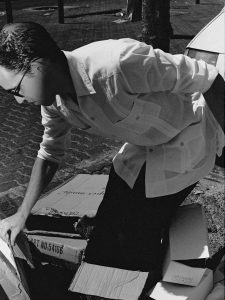