“Bricolage” was notably referred to by French philosopher Claude Lévi-Strauss in “The Savage Mind” (1962), where he explains the mythical thought process behind gathering diverse elements from one’s surroundings to create new meanings of things: To that extent, the “bricoleur” is one who does just that. It’s an incredibly modern, even valiant practice; we are perpetually inundated with information and new stimuli, and while it is fairly easy to be a passive consumer of such things, it takes conscious—and constant—effort to be able to absorb and refashion the world around you for the purpose of starting new dialogues. Here, Document explores the work of London-based artist Samara Scott, whose current solo exhibition at Four Six One Nine in Los Angeles’ Mid-City, “Jacob’s Creek,” presented by The Sunday Painter can be described as a fascinating cocktail of readymade objects (and several liquids, too).

Derrick Gaitér—How does Los Angeles inform your creativity in this particular endeavor?

Samara Scott—I’d never been to Los Angeles before. There is something fantastic about American cities: maybe they are the ultimate botched and flopped utopias. It’s as if you can turbulently experience the clichés—all those scenes that you expected to find—mingling amongst your own image. There is a hallucinatory, scripted quality to them, already so familiar but somehow garbled copies…it feels like you’re reenacting someone else’s story rather than your own. For the show at Four Six One Nine I’m making all the work [in Mid-City], and the process itself is unavoidably cinematic.

Derrick—Artists are increasingly observing sustainable practices and your work is evident of that.

Samara—I’ve spent a week driving aimlessly around the city in a hench, shiny, black Buick, cruising, directionless, accumulating or harvesting, just soaking up the debris I find on the street: old mattresses, scrap metal, Halloween decorations, dead palms, plumbing pipe, rotting fruit. I’ve even stole handfuls of decorative gravel and polished succulent plant life from the manicured suburban lawns where I’ve gone running in the morning. The materials I choose are potent with a kind of lethargic nostalgia. They are a borrowed native archaeology that I’m turning into a kind of archive infused with a sort of hilarious—and at the same time sober and earnest—urban spirituality.

Derrick—Style via reassembly and recontextualization is all about finding new ways to solve old problems. What is your unique approach to artistic topic concerns?

Samara—I’m experimenting with  superimposition with the translucent layering/smothering I use in my work, creating effects of skins, dust, camouflage, or even the airbrushed faces creamed with foundation.  I’m interested in the lack of gravity/flattening that happens in media landscapes…I guess that’s why I work within relief, something suspended between painting and sculpture, and things that burn between plasticity and a mercurial aliveness. I’m fundamentally interested in desire, its lusts and neurosis. You can feel that binge and hysteria here—the insatiable craving for pleasure and intensity. I’m also thinking about narcissistic cities, but also how these things get internalized: how narcissism might feel in your body. How superficiality might be ingested. I suffer; I want too. In this hyper-global world of products—a moment of total integration—there is intimacy as well as contamination. I want to employ a kind of trashy sorcery, and to use materials that procure feelings that are slopping somewhere between pleasure and nausea, comfort and irritation, sex and retching, the artificial and the natural.

Derrick—From this process of accumulating matter, how would you say Americans consume differently than people in other parts of the world?

Samara—I think Western attitudes are all pretty similar, it’s just more saturated here, more tumorous, swollen. The divide between rich and poor gets even more extreme—the smooth cut between classy and crude, the sour and the glossy. The environment is a juiced up pleasure system fattened by media steroids. Things are more bloated here.

Derrick—Describe your process of reflecting the culture you are in.

Samara—It’s a compulsive, guilty, kind of confessional impressionism. I’m a partial commentator, but more than this, I’m a bloodsucking and dependent participant. It’s a mastication of the things around me, an almost bulimic regurgitation. My processes are haphazard, confused, and, sometimes, I’m too close up to see properly. But I like making this way: allowing things to be dizzy, frazzled, even. Rather than be a mirror, or a translator, it’s more like I’m transmitting a sensation of inflammation. It’s naïve and sometimes queasy. I guess it’s important for me to make work from a vulnerable position, where I’m not delivering a polished and condescending commentary, but rather recognizing that I’m a flawed, clumsy human, too. Urgency and restlessness are always close.

Samara—I have this sense of materiality becoming so illegible, so volatile. I’m so surrounded by superimpositions of churning and elastic images. Reality can be so odd, so accelerated, so bent by digital realities. It’s as though legibility is infected. We’re so saturated by an organic accretion or a kind of inherent rot of media landscapes it almost revises itself into blindness.

Derrick—What are you making for this show?

Samara—The show is called “Jacob’s Creek,” after the wine brand. It will be a new series of liquid works with a composition made from spilling thickset heaves of the debris materials I’ve been compiling from the streets. It’s still very much in progress, and still changing, but the works are looking like these drowned and laminated neon sewers, or horizontal screens. The technique is very crude; building up films of moisture and layers of liquids between tarpaulins and dust-sheets, but the effect is an ethereal, lasagna-like suspension of cosmic and underlit matter. They are gastric veneers, glistening fungal shop windows, meat lockers, suffocating in packaging, sweating.

Derrick—Is getting inspiration from an environment something that requires meditation?

Samara—It’s more of a slow digestion. Sometimes you have wait for things to burp up to the surface. Some things can take years to unwedge and drift into current atmosphere. Environments self-pollinate and you can’t control the speed of re-dispersal. I have spent a lot of time in Miami and Florida, and it’s one of the most interesting places I’ve ever been. Two years on I’m still processing its gassy cocktail of glitter, testosterone, steroids, liver spots and antidepressants into my studio.

Samara Scott’s “Jacob’s Creek” is now view at Four Six One Nine from now until November 19, 2016. 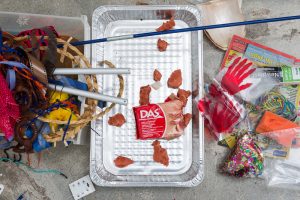 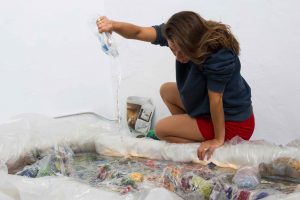 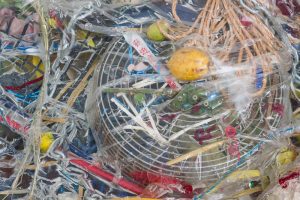 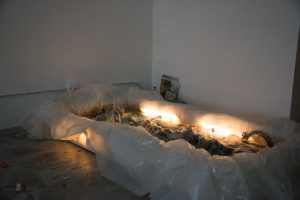 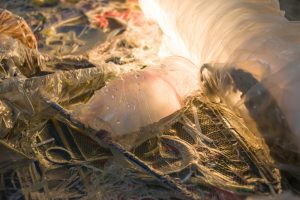 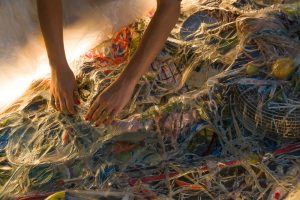