There are more than 269 art fairs every year, but there is only one Art Basel Miami Beach. The American (and far more dazzling) counterpart to the historical Swiss fair is one of the most highly anticipated events in the art world and is a social get-together for the pre-Christmas of sorts. Threatened by Zika, there were noticeably less people in attendance this year—et nothing, not even natural disasters, was truly big enough to stop the flood of jet-setting power players and celebrities from coming to Florida. Barbra Streisand was among those anointed with a coveted First Choice VIP, waiting before the clock to tick 11AM, when the doors open to the feeding frenzy of the uber-wealthy. In the first hour, mega-gallerist Larry Gagosian sold a Gerhard Richter painting for $5.8 million dollars. And if not the incredible prices and often moving art (Gladstone Gallery showed a beautiful portrait of Barack Obama by Elizabeth Peyton), we come for the fashion. You can hear the sound of tinkling glasses of champagne at the annual Loewe exhibition hosted by Jonathan Anderson. There was the epic opening OMA-designed luxury Faena Bazaar. What we looked forward to most was the MM6 Maison Margiela x Aaron De La Cruz collaboration, where the artist created a limited edition of 60 denim bags with his work. But once adorned in the highest fashion, it must be shown off on opening day of ABMB. Here are Document‘s top works to see. 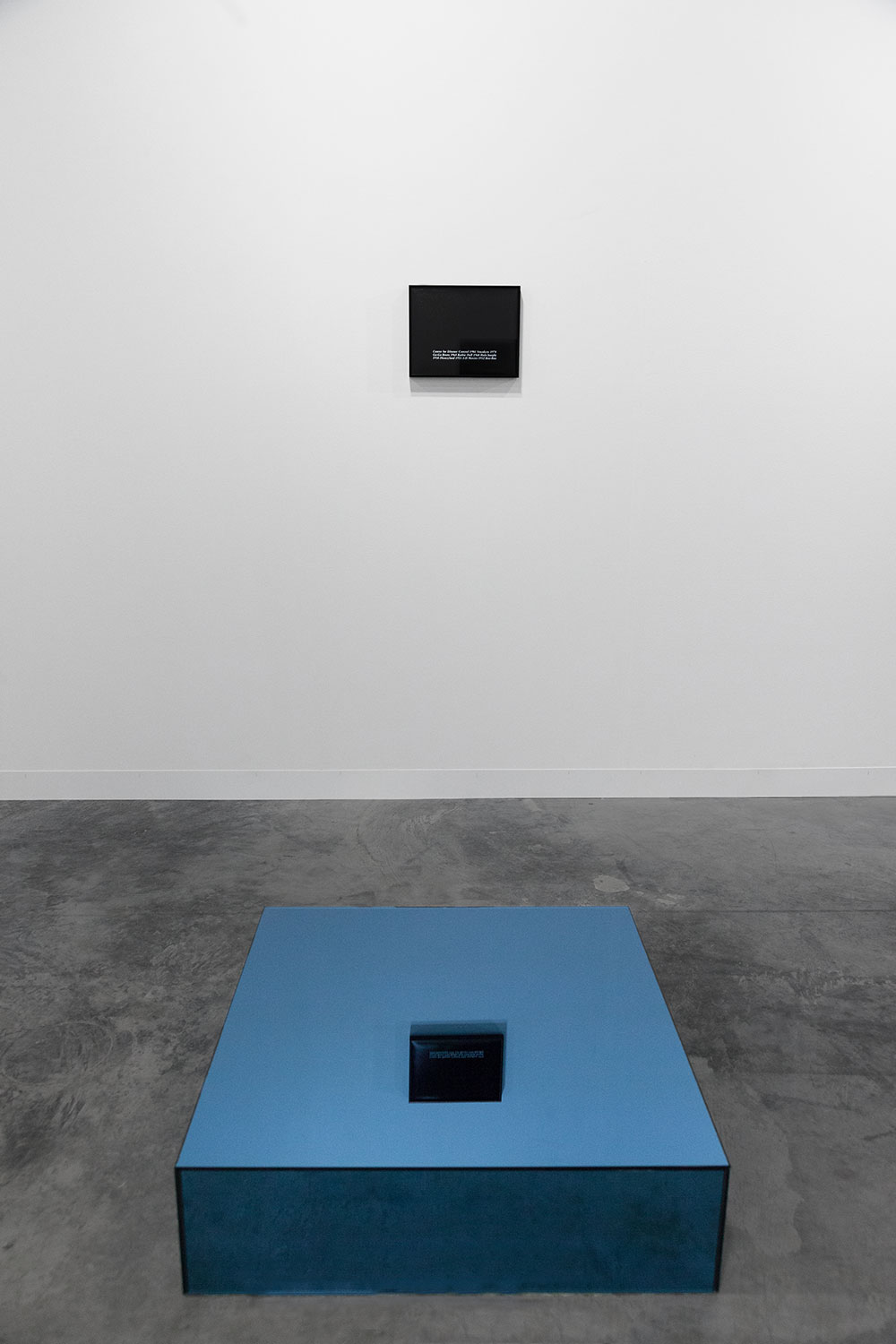 If you see only one booth at ABMB, make it this one, with a stunning selection of small paintings by the late Carol Rama and others like Llyn Foulkes, Josiah McElheny, Lynda Benglis, and the noteworthy newcomer Hayden Dunham. Still, we came to see the work of Felix Gonzalez-Torres; his “Untitled” (Fear) 1992 is a contemporary masterpiece. Made entirely of blue mirror, it shows us the world around it (fittingly, all the frenzy of Art Basel is reflected). The color symbolizing the last hours of the day, we see ourselves in the work of art, and beyond that, our own mortality. Mirrors were a stalwart of minimalism, but here, as in all of Gonzalez-Torres’s work, a small transformation adds the tenderness of loss and love, suggesting the larger poetic experience of the artist as a gay man bravely facing the fear (as in the title) of his own untimely death: he and his lover Ross who were both diagnosed with AIDS.

The de-facto New York gallery of the moment is presenting a solo showing of the de-facto artist of the moment. If you haven’t yet heard of Anicka Yi, a living maker of art history, it is only a matter of time. The emerging South Korea-born, New York-based Yi already has an impressive CV. She just won the hugely prestigious Hugo Boss Prize, was in the inaugural exhibition of Fondation d’entreprise Galeries Lafayette in Paris, and was shown in the Rubell Family Collection as well as in the 11th Gwangju Biennale. She has skyrocketed in a short time, creating work for all the senses—most provocatively, fragrances from flowering bacteria, pots of who knows what rotting, and tempura batter. Now, in this new work, which also explores the relationship between the body (the female form, in particular) and nature; “When Species Meet Part 1 (Shine Or Go Crazy),” laboratory flasks along with a giant sculpture of mushroom capped with honeycomb sit inside a faux fur-covered cage. Inspired by her recent trip to the Amazon, it is ripe with metaphors.

Sam Durant at Blum and Poe

Blum and Poe is a politically-engaged showing that directly confronts racism in America, including several powerful paintings from Henry Taylor, already one of the most talked about artists in the upcoming Whitney Biennial. Also installed is an iconic 2008 Sam Durant piece aptly titled “Occupation, Lies, Illegal, Respect, Supremacy, Freedom?”—which urgent gives the kind of art needed now. With layers of spray painted text tagged on top of the minimalist clean mirror, the piece procures a phenomenological effect where we become both the observer and the observed. Durant recalls the powerful writer-graffiti artists who were the voice of resistance in the sub-culture in the 1970s by replicating radical slogans of political change. One tag reads “You are on Indian Land Show some Respect,” a poignant message in light of the Standing Rock Sioux Reservation protests against the Dakota Access Pipeline.

As always, Essex Street presents a beautiful show. This time it’s via Chadwick Rantanen and Vern Blosum; two artists that, at first, seem to have nothing to do with each other. The connection unravels, though, in light of the tightly curated and conceptually rigorous program of the gallery—both artists can, for instance, be considered inventors. Blosum is the pseudonym of an artist that remains unknown but is in the permanent collection of the MoMA and hangs next to the likes of Andy Warhol—an invented hoax intended to mock pop art. In the end, he is an artist that investigates the relationship between text and image with deadpan humor. It is this sensibility that links Blosum to the inventive humorous (but not necessarily ironic) Rantanen, who presents a series of altered motorized motion decoys birds. Terrifying and seductive, the piece shows the insides of these animatronics that are hung like mobiles of a perverse flapping Calder. 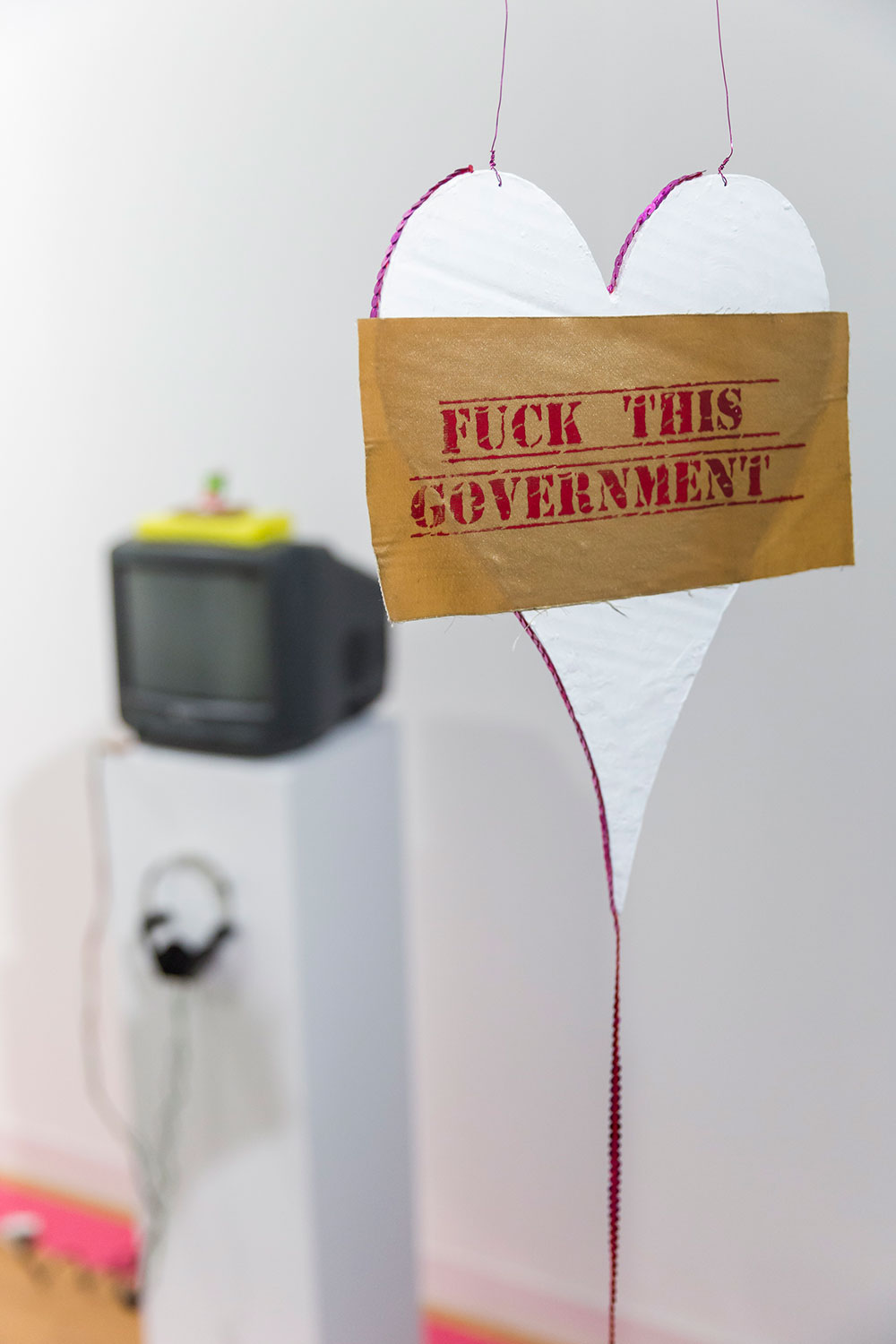 Maggie Lee’s work plays out as a type of confessional poetry in the form of a video installation. It is sincere, diaristic, and explores the deepest aspects of youth, race, and gender. Most striking, it hits you in the gut with its personal narrative. Although Lee engages many traditional video tropes, she also intersperses the language of blogging and remix culture of the internet. In her 2015 film, “Mommy,” she explores the rich memories of the life and death of her mother. Diaristic moments recall Document contributor Jonas Mekas, but she renews the medium in the voice of a millennial generation who are born digital natives.

Berlin and Zurich-based artist Kaspar Muller makes work that challenges us to construct meanings without narratives and plays with questions originality. He ironically plunders the experience of alienation of contemporary consumer culture. We want to laugh at its comic absurdity, until we catch ourselves in its pathos. His work is unsettling in its ability to be both formally beautiful and unresolvable. At Basel he presents an entire booth of hanging strings of giant hand blown glass balls (“beads on a string”) in the colors and shapes of oversized marbles. Narratives like muscle movements and language itself are constructed out of sets of ordered sequences. To change a single item in a sequence can render the entire movement meaningless, yet Muller’s vines hang in a jungle of sequential nucleotide base-pairs that are all interchangeable. Take one off or add another and nothing changes. His hand selection of furniture, equally irreverent, brings together lowbrow, like a Walmart air mattress, highbrow, an iconic Memphis Group sparkling green chair, and junk, challenging the distinctions a “functional” objects of life and “nonfunctional” objects of art.

A perfect pairing of star young artists Aleksandra Domanovic and Oliver Laric, this booth could not be hotter. However, it is not the talk about them that matters as much as the work that talks to us does—there is literally too much to say for this short review. Domanovic continues her series based on ancient Greek votive figures, offering up objects vowed to the gods—in this case WMBA balls. Domanovic strongly critiques the image of the female body as inferior or weaker as symbolized by the much smaller basketball that profession female players use. As always, the sculptures reference the android prosthetic body of women. Like Domanovic’s, in the work of Laric, there are layers and layers of meaning. Laric always investigates the possibility and history of 3D scans and 3D printing, which confounds notions of authenticity. All of his laborious scans of ancient sculptures are made available for free on his website, but he is also interested in the history of casting from life and otherwise. The large wall work includes references such as Bernard Palissy, the 16th century ceramicist who cast from live animals either drowned in their own urine or boiled. 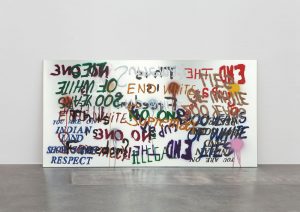 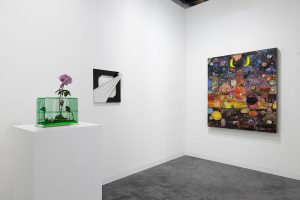 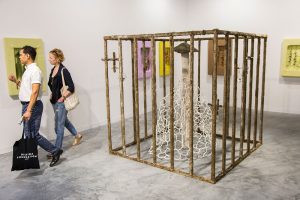 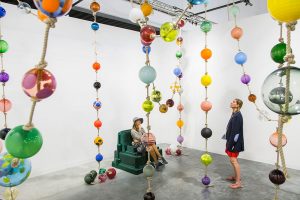