Since 2004, Berlin-based eyewear manufacturer Mykita has been developing high-quality optical frames with an unparalleled commitment to material research and innovative technological production. Available now are three new capsule collections from the label that reference classic Havana shapes, graphic illusions, and art deco design sensibilities. To coincide with the launch, Document sits down with creative director Moritz Krüger to discuss inspiration, design philosophy, and the importance of tradition.

Nick Vogelson—The entire ethos of the Mykita brand is quite beautiful. It seems like, even as the company grows, it retains a very personal quality. I’d love to learn where this began. What drew you to eyewear?

Moritz Krüger—Coincidence. I came to Berlin to study visual communication at the Universität der Künste, and through friends I got a job at a little eyewear company that had just started. It was only meant to be a student job, but a week later I was already in charge of distribution and marketing. Nobody really had a clue. Before I knew it I was in Paris to check out the shows.

It was a very positive playground, you know, but with responsibility. I was constantly asking myself, “What’s the challenge, how can we solve the problem?” I met the other guys that I started Mykita with there and after a year of working for the company we said, “Okay, let’s give it a try. Let’s start a new company.”

Nick—It’s such a smart idea. So many eyewear companies are of a different generation.

Moritz—You know, we were never thinking strategically, really. We were just trying, and we were willing to take a risk.

Nick—It must’ve been intuitive in some sense, though. Even if you weren’t thinking, “Oh, we see the market.”

Moritz—We were very good at analyzing the impact that our actions had and learning from them.There was no establishment in the city that you could look at and model yourselves after, so we were constantly assessing our business model and operations.

In the beginning we had like ten different materials and ideas that we were starting to look at, but at the end of the day we chose a single 0.5 mm stainless steel for our first collection.  It was a very small collection, just a few optical frames and a few sunglasses in silver, black, and gray. Not very colorful, but very industrial—very raw. We didn’t use anything that you could buy as an existing product; we designed everything, including the silicone tips used for the nose pads.

It’s fascinating, when you create restrictions, you’re forced to think outside the box.

Moritz—It was. It took about a year, from December 2003 to September 2004. We had the first launch in Tokyo and then a week later in Paris. We knew that we could not wait in Berlin for somebody to discover us and the brand. We had to identify the point of sale; we had to go and find the customer! Japan was quite successful, we had a little presentation at an optical store and everyone who came really appreciated what we had created. Paris was very crazy. We constantly had people waiting outside our booth. I think we sold some 4,000 pieces in four days. It was incredible.

Nick—Could you give me a brief introduction to the three new capsule collections.

Moritz—Studio 1.1 and 1.2—a.k.a. “Modern Metropolis”—draw from an art-deco design sensibility. We challenged ourselves to only use perfect circles and horizontal lines. It’s fascinating, when you create restrictions, you’re forced to think outside the box. It’s a paper-thin structure that has this fence quality to it. So it has a volume but, at the same time, it’s extremely light.

Studio 2.1 and 2.2—“Graphic Illusions”—are bi-color frames with vertical mirrors. Achieving the partial mirroring effect was a very complicated process. Not only did we have to adhere the mirror onto the lens, but we also had to cut the mirror so that it would line up precisely with the frame. It it was off by even a little bit the entire concept would be lost. That was something we worked on quite a bit, putting these two silhouettes on top of each other to create such a striking graphic.

For Studio 3.1 and 3.2—a.k.a.“Black Magic”—we relied heavily on material research. There’s a company in Italy that produces the acetate for us, and once we figured out the process of developing this material, we better understood what exactly we could change in order to create our own structures. It was really about exploring the physicality of our resources to produce a classic Havana shape.

Nick—Can you talk a bit about your design philosophy in terms of relying on tradition?

Moritz—When it comes to tradition, if it exists, it means that there is something worth preserving. But we believe that, if you want to introduce a successful product today, you cannot make an exact replica of something that has already been created. What we do is to try and take a traditional inspiration, say a shape or a particular bending of metals, and mix it with modern technology. It’s like creating a new recipe; of course there is the familiar ingredient, but then you mix it with something else and produce an entirely new product.

When it comes to tradition, if it exists, it means that there is something worth preserving. But we believe that, if you want to introduce a successful product today, you cannot make an exact replica of something that has already been created.

Nick—How do you think about collaborations? It’s obvious that so much of your process is about inspiration, whether that be an artistic or manufacturing inspiration.

Moritz—Again, we did not start collaborating with manufacturers or designers with any strategic sort of agenda. Bernhard Willhelm was our first real collaboration, and it was always very exciting because his mood boards were full of so many unusual things. It’s wonderful to establish this connection where somebody else, be it a designer, an artist, or company, is sharing their own ingredients. This ingredient could be anything—an idea, an inspiration, etc. With Margiela, for example, this company has so many codes, their DNA is so rich and they have such a specific mindset that it was very easy to study their philosophy and translate it into eyewear.

Collaborations are friendships as well. We don’t work with people for just a season, often it is for years at a time.

Nick—Given the technologies that you’ve developed, can you see a future beyond eyewear?

Moritz—Of course, yes. But we are very busy. And Mykita is very holistic. We are a small company and we produce everything ourselves. I like to think of other things that could be done with our knowledge and design philosophy, but definitely the first connections to be made are still related to eyewear. 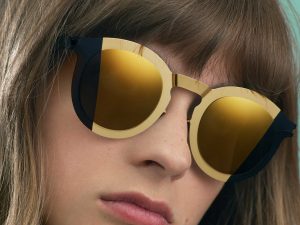 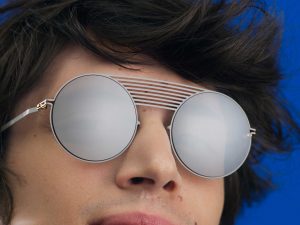