As of February 2015, the self-proclaimed Islamic State in Iraq and Syria (ISIS) has deliberately destroyed over 100 museums, archaeological sites, and historic monuments, plus dozens more shrines and mosques of the Shia, Sufi, and Yazidi people. Cultural destruction has become a cornerstone of the group’s reign of terror, leaving many people asking what will be left of art—classical, Islamic, and contemporary—after the war.

ISIS did not invent cultural destruction, of course. Many of us can recall the dreadful sight of the Taliban blowing up the monumental, over 1,500-year-old Buddha statues in Afghanistan’s Bamiyan valley in March 2001. The deliberate and public destruction of art and cultural works was also a fixture of Nazi Germany, the Chinese Cultural Revolution, and the Khmer Rouge totalitarian dictatorship in Cambodia. Each of these episodes was devastating and hateful in particular ways that keyed into the prevailing political platform of violent repression. If there is a signature move within ISIS’s own program of cultural destruction, it is this totalizing erasure from artwork and image to idea and memory.

For ISIS, it is not enough to blow up statues or loot archaeological sites for profit. Concomitant with the physical destruction are acts that effect ontological destruction. By this I mean that the basic structures of meaning that imbue a statue or painting or shrine with symbolic valence are wiped out. Consider this: When ISIS overran the Syrian city of Tadmur in May 2015, it seized the majestic ruins of the ancient city of Palmyra, a UNESCO World Heritage Site that sits adjacent to Tadmur. Palmyra was once a leading city in the Eastern Roman Empire, and was known for its well-preserved buildings and artworks from that era. Ahead of the ISIS takeover, the former director of antiquities at Palmyra, Khalid al-Asaad, took measures to protect the valuable pieces in the local museum. When ISIS arrested and tortured him, al-Asaad refused to reveal the pieces’ whereabouts. On August 18, 2015, ISIS decapitated al-Asaad in Palmyra’s public square and humiliated his body with a placard accusing him of propagating idolatry and participating in “infidel” scholarly activity. Al-Asaad was in his early 80s. What he represented for ISIS was a specific form of knowledge about the past that had to be controlled and, if total control proved impossible, eliminated. Scholars have also been murdered in the Iraqi sector of the Islamic State, and ISIS shut down the renowned department of archaeology at Mosul University by October 2014.

Along with destroying knowledge about ancient history and its cultures, ISIS methodically dismantles ethnic minority communities within its midst. The Iraqi Yazidi population endured horrific persecution with the ISIS takeover of their home region in 2014. Mass executions, rape, and enslavement have gone hand-in-hand with the destruction of Yazidi homes, markets, and places of worship. This, too, is ontological violence: When there are no people left to speak of their culture and no culture left to speak of, the people and its culture become incomprehensible.

To fight back, archaeologists, human rights workers, and NGOs are documenting the destruction and planning for the recovery and repair of ancient artworks. In June of 2016 in Berlin, UNESCO and the German Federal Foreign Office convened a meeting of 230 Syrian and international experts to announce a cooperative damage assessment project in Syrian zones recaptured from ISIS by the Syrian government. The event signaled shared transnational concern for the future of the region’s cultural past. It also suggested the magnitude and complexity of the destruction. Because while the Syrian civil war and the rise of ISIS introduced new forms of cultural violence, archaeological looting and the deliberate destruction of ancient monuments were, in fact, endemic here for much of the 20th century.

Syrian military examine the remains of ISIS destruction at the Temple of Bel in Palmyra, Syria. Photograph by Lorenzo Meloni.

Syria is roughly the size of Missouri in terms of its pre-war national territory, and it contains 4,500 registered archaeological sites (and perhaps many more that have not yet been recorded). Those sites contain artworks and artifacts from some 5,000 years of human inhabitation, including such important civilizations as the Sumerians, Akkadians, Assyrians, Hittites, Greeks, and Romans. This is the Fertile Crescent, the culturally rich zone that gave rise to some of Western civilization’s most notable milestones: the invention of written language, money, the domestication of crops, and the rise of complex urban societies. The clay tablets of the Sumerians, with the distinctive wedge-shaped strokes of cuneiform, give us some of the earliest examples of documented communication. Most archaeological sites in Syria have traces of more than one ethnic group, making them rich repositories of vibrant cultural diversity. It was this very symbolism that Saddam Hussein and Hafez al-Assad, former dictators of Iraq and Syria respectively, exploited in their political propaganda. Meanwhile, the artifact deposits that are so valuable for historians and archaeologists are equally valuable to participants in the antiquities trade, where ancient Near Eastern goods are in high demand.

It is this tragic love affair with ancient art that Ali Cherri responds to in his work. In “A Taxonomy of Fallacies: The Life of Dead Objects,” which just completed its show at the Sursock Museum in Beirut, the artist offers critical commentary on the dispersal of cultural heritage through the unregulated art market. The work comprised two installations: “Petrified,” a video exploring archaeological and museological spaces, and “Fragments,” in which Cherri uses a simple light box to display artifacts that he found through online dealers. The images presented here showcase the artist’s interest in the interplay among scientific archaeology, commodification, and histories of violence. The objects are a jumble of past places, peoples, materials, themes, genres, and authenticities, and because they are suspended over the stark white light with no labels they are without provenance. This aspect of the show is one of its especially striking achievements. Cherri’s intention, he writes, was to present the objects “once dead and buried, then undead and thus unburied, displayed under a clean light…[as] a spectacle of continuously-and-forever dead.”

As spectacle, it is hard to look and hard to look away. The clinical whiteness of the light box is unforgiving of flaws—the breakages, repairs, and losses that accrue through the centuries. This manner of illumination strips the objects of their shadows and metaphorically suggests that they have no instantiated histories. Having obliterated the past, the light box provides a superficial regrouping of the objects on the basis of their entwined commercial destinies. What links them now is the artist, Cherri, in the guise of the collector. It is his wunderkammer spilled from the cabinet and laid bare on the table.

Two objects stand out: the taxidermied bird and the wooden tau-tau from the Toraja people of the Celebes Islands. The bird is frozen in flight, perhaps spreading its wings protectively over the little pieces next to it (but perhaps, too, spooked by so many unquiet artifacts).

The tau-tau once held vigil at the tomb of a Toraja man, woman, or child, and now stares steadily at the viewer as if to say, “These things here, too, are dead.” The rest of the objects—the Cuchimilco figurine from northern Peru, the Hellenistic statue fragment, and the Egyptian statuette—share in the fate of decontextualization. Each of these pieces asks a series of questions: How did it arrive to its Western point of sale? What were the historical, political, and economic pathways that took it from its original context to points afar? And what do such pathways reveal about our own complicity in the objects’ cultural life (and subsequent death)?

These are challenging questions, and yet by asking them with artwork Cherri renews hope for the future of the past. The artist’s counterpoint to destruction is creation, and in contending with issues of looting and violence he enlists all of us in an ongoing narrative of historical and material change. There is a form of deliberate tenderness in each of his works, an acknowledgment of the devastating beauty of the ancient pieces and a reprieve, however brief, from the tumult of war and political change and a global appetite for artifacts. 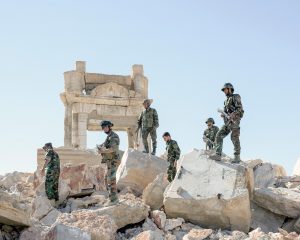 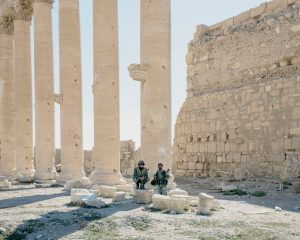 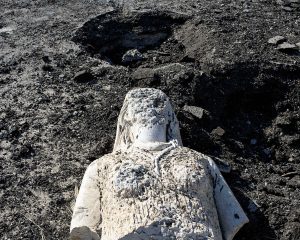 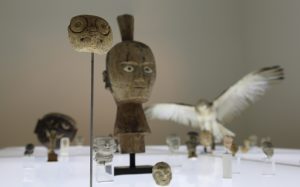 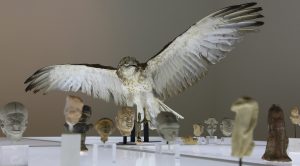