For the late artist Elaine Lustig Cohen, abstraction was informed by the built environment. She began her design career in 1955, at the age of 28, without any formal training, when architect Philip Johnson commissioned her to create the lettering and signage for the iconic Seagram Building. She went on to integrate the aesthetics of European modernist abstraction into a distinctly American visual idiom for an impressive roster of clients, including the Jewish Museum, the Whitney Museum of American Art, architects Eero Saarinen and Richard Meier, and Meridian Books, among many others. In the 60s, she focused her attention on painting, developing a hard-edged style that engaged the physicality of the canvas’ flat surface with bold colors, abstract shapes, and linear patterning.

An exhibition of Lustig Cohen’s early paintings and graphic design at Johnson’s Glass House inspired Pierre-Alexis Dumas, Artistic Director of Hermès, to meet the artist and develop a scarf based on “Centered Rhyme.” Pictured here, the limited-edition scarf is presented in Lustig Cohen’s original crème-jaune-rose coloration. All sales benefit the preservation of the modernist property.

Cole Akers—We met at Elaine’s home some time ago now. She very much enjoyed her conversation with you. What did you think of the house?

Pierre-Alexis Dumas—The opportunity to meet Elaine was a privilege. She lived in the present and surrounded herself with everything that mattered to her. It was very minimal but everything made sense. She was what I call a humanist—someone who was clearly interested [in] everything—everything that was creative, audacious, exciting, and thought-provoking. What struck me that day was that, even though she was very old, she was walking up and down that [flight of stairs] in the house. I found her beautiful physically in the way she stood up, in the way she was alert—she was that ideal of life that I have. Working with her, even from a distance, on that project was an incredible way to learn something. I feel that what I’ve learned from her now is part of the Hermès culture, it’s part of the Hermès history. It’s another layer that makes this house such a special house to my eyes.

Cole—And your impressions of her paintings?

Pierre-Alexis—The moment that I saw her work I knew that it would be perfect for reproduction on silk. In fact, I believed that she had been making Hermès scarves without knowing it until we met. [Laughing.] Her concerns were of creating a moment within a square, creating the illusion of depth, what I call “perspective by color.” She thought about what makes the image beautiful, the essence of that image, the underlying structure, the underlying composition. This is why together we chose, “Centered Rhyme,” which completely expressed, in an abstract way, the potential for design to create movement within a square.

Cole—When did you begin to create textile patterns?

Pierre-Alexis—Hermès started making its own designs for textile in 1937. Before that, we had some textiles in the collection, but we would buy [patterns] directly from the suppliers and have an [exclusive] for a year or two. My grandfather was frustrated by that process, and started to bring his own designs to Lyon. We printed square scarves because it was a tradition in Lyon; nothing comes out of nothing.

Cole—Elaine was a good friend of the Albers.

Pierre-Alexis—For me, she was completely in the spirit of the Bauhaus, but, beyond: she was a true second generation. The Bauhaus was short-lived, but an early expression of what was to come. It came after World War I, and after World War II it was obvious that we had to reinvent a new world. Elaine allowed herself as an artist, and others as viewers, to feel, to leave space to realize what we feel. With “Centered Ryhme,” we were talking about how we felt. And that is very important. That’s what I like about Anni Albers, Josef Albers, Elaine Lustig Cohen. That finesse that made her a great artist was her true ability to feel and to understand her feelings. I see that in the very subtle nuance of her work as a graphic artist and in her palette of colors, which I find incredibly refined. This is the essence of her work—and the essence of the work of Philip Johnson as an architect.

Cole—What was your experience of the Glass House?

Pierre-Alexis—For me, the Glass House is a moment of grace. It’s a masterpiece, and it has to be protected and it has to be seen. Every human creation has its references and its inspiration. It’s a long chain that has never been interrupted. This is why it matters to fight to preserve these places.

Cole Akers is a curator at The Glass House and organized the 2015 exhibition of Elaine Lustig Cohen’s early work. 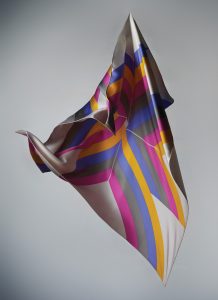