This June, eight next generation designers—Yoon Ahn (Ambush), Kozaburo Akasaka, Cecilie Bahnsen, Nabil Nayal, Molly Goddard, Maria Kazakova (Jahnkoy), Marine Serre, and Antonin Tron (Atlein)—will compete for the 2017 LVMH Prize. Spanning seven different countries, and including both men’s, womenswear, and unisex collections, each finalist draws upon his or her varied past for entirely unique points of view—from Yoon Ahn, who, though Tokyo-based now, grew up in a Seattle suburb, to Bahnsen, whose multicultural European background has shaped her heritage-based craft. The award, juried by a special council, including Delphine Arnault and nine heads of LVMH houses—Jonathan Anderson, Maria Grazia Chiuri, Nicolas Ghesquière, Marc Jacobs, Karl Lagerfeld, Humberto Leon, Carol Lim, Phoebe Philo, and Riccardo Tisci—was born out of the need to find and foster emerging creatives—an invaluable process in the often rigorous terrain of the fashion landscape. Following past names such as Thomas Tait, Marques ‘ Almeida, and Wales Bonner, the winner of this year’s prize will receive 300,000 euros and a full year of mentorship from the LVMH group. Over the next days leading up to the final announcement, Document and photographer Ben Grieme present an intimate survey of these designers who are changing the way we think of and view fashion.

Read the first installment with Marine Serre, who balances traditional Arab garments with her personal love of sportswear, here. 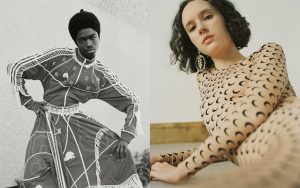