It has always been hard to ignore the audacious and irreverent art of George Condo. As a young painter in the early 80s, he burst onto the downtown scene in New York with sold-out solo exhibitions at Barbara Gladstone and Pat Hearn galleries. As the story often goes, painting had died around 1970, thanks to the rise of Minimalism, Conceptual art, performance art, photography, video, Land art, and a slew of expanded practices. Condo and his friends—like Jean-Michel Basquiat and Keith Haring, as well as others—were able to revive it a decade later by applying new techniques and materials, from graffiti to broken plates.

But Condo did something different from the others. He produced “fake Old Master” paintings that quoted and fused art history with contemporary cultural references. For more than three decades, the artist has continued to work mainly within the European tradition of portraits, and he freely assimilates the style not only of Old Masters like Goya, but also 20th-century movements like Cubism, Surrealism, and Abstract Expressionism.

This portfolio of ink and graphite drawings on paper showcases Condo’s wit and draftsmanship. “Figure with Bow Tie,” for example, is a portrait of a face that explodes in a cacophony of Cubist-style geometric lines. The narrow head, saucerlike ears, and closely placed eyes frame a toothy mouth caught wide open. The fragmented face, however, is made comical by its juxtaposition with the formality of a shirt and bow tie. The toothy smile—at once frightening and comical, grotesque and beautiful—is a recurring motif in Condo’s work, and he has often referred to his work as “psychological cubism,” exploiting unseen moments of humanity for his tragicomedies.

On display until June 25th, the Phillips Collection in Washington, D.C., presents “The Way I Think,” a major survey of 200 drawings and paintings by George Condo. 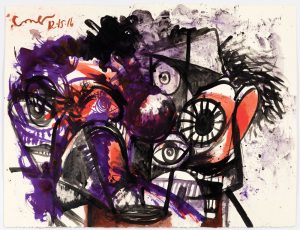 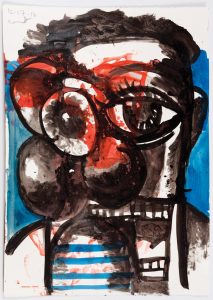 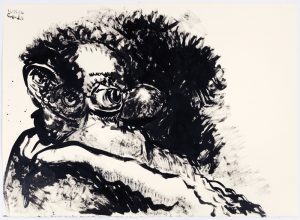 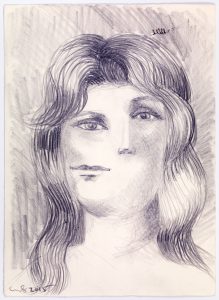 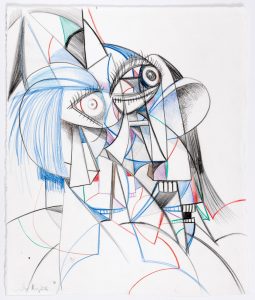 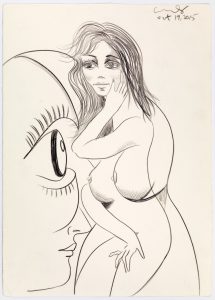 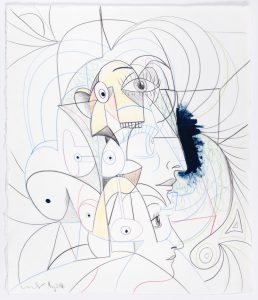 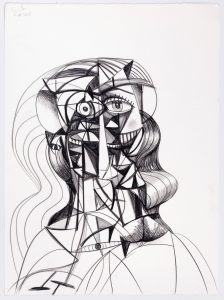 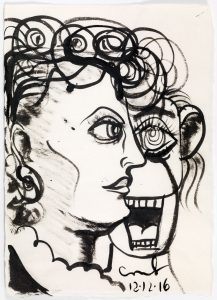 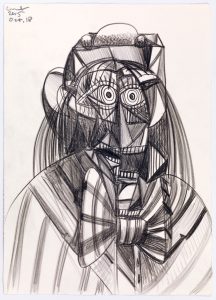