Document visited the fashion capital to highlight its fantastic mix of Paris first-timers and storied fashion houses during its week of couture.

Jack McCollough and Lazaro Hernandez of Proenza Schouler said goodbye to New York and bonjour to Paris, where they made their debut in the City of Light on an overcast Sunday morning—in the cloister of Lycée Jacques Decour. The designers took a risk and headed to France in an attempt to increase sales and gain more international exposure. In true couture vein, the pair enlisted the help of Parisian artisans to do the intricate beading and embroidery work used on patched-together floral tops. The runway show, which showcased both the Fall 2018 and Pre-Fall show collections, started out with romantic ruffles—a motif they used just a year ago—before transitioning to floral jackets and delicate lace bottoms. The clothes were beautifully done, but the question is: will the gamble pay off?

Dior may have held its 70th anniversary couture show just outside the Musée Les Invalides—the military museum in Paris—but the show’s setting transported guests to a far away place comprised of flora and fauna in the form of wood animal forms, and a whimsical painting by artist Pietro Ruffo that topped the imaginary world of Dior. For her second couture outing, Maria Grazia Chiuri looked into the house’s archives and discovered a 1953 Albert Decaris etching that showed the five continents, to trace the house’s global expansion. She also looked at a quote from the label’s namesake that read: “A complete collection should address all types of women in all countries.” Chiuri journeyed around the world and through time, referencing the designer’s 1953 “Oxford” look in a gray suit and skirt, and the “Autriche” ball gown from 1951 with a like-minded minimal silk gazar number. She then debuted a number of looks that were all her own, like the jewel-toned patchwork coat layered over a rainbow feather dress, and a coat decorated with tarot embroidery—proving that as the first woman creative director in the brand’s history, she could hold her own against its rich legacy.

Americans invaded Couture Week this season, and for Laura and Kate Mulleavy—the sisters behind the Los Angeles-based Rodarte—the decision couldn’t have been better. Their collections hold a similar mindset to that of couture; intricate details—like delicate beading and textured appliqués—are imbued within their garments. The designers ditched the former DIA Building, where they’ve regularly held their shows for the last few seasons, for the cloister and gardens of Cloitre Port Royal. The first look, a frilly sheer lace dress, left nothing to the imagination, adding a bit of daring edge to an otherwise demure silhouette. Leather moto jackets and trousers provided a contrast to the feminine, romantic dresses decorated with baby’s breath appliqués, as well as lace ruffles, and flowers composed of artfully crafted beads. Having the models stand presentation-style against the blooms in the garden was a smart choice for the finale; the French seemed to agree as the word “magnifique” was uttered throughout, over and over again. 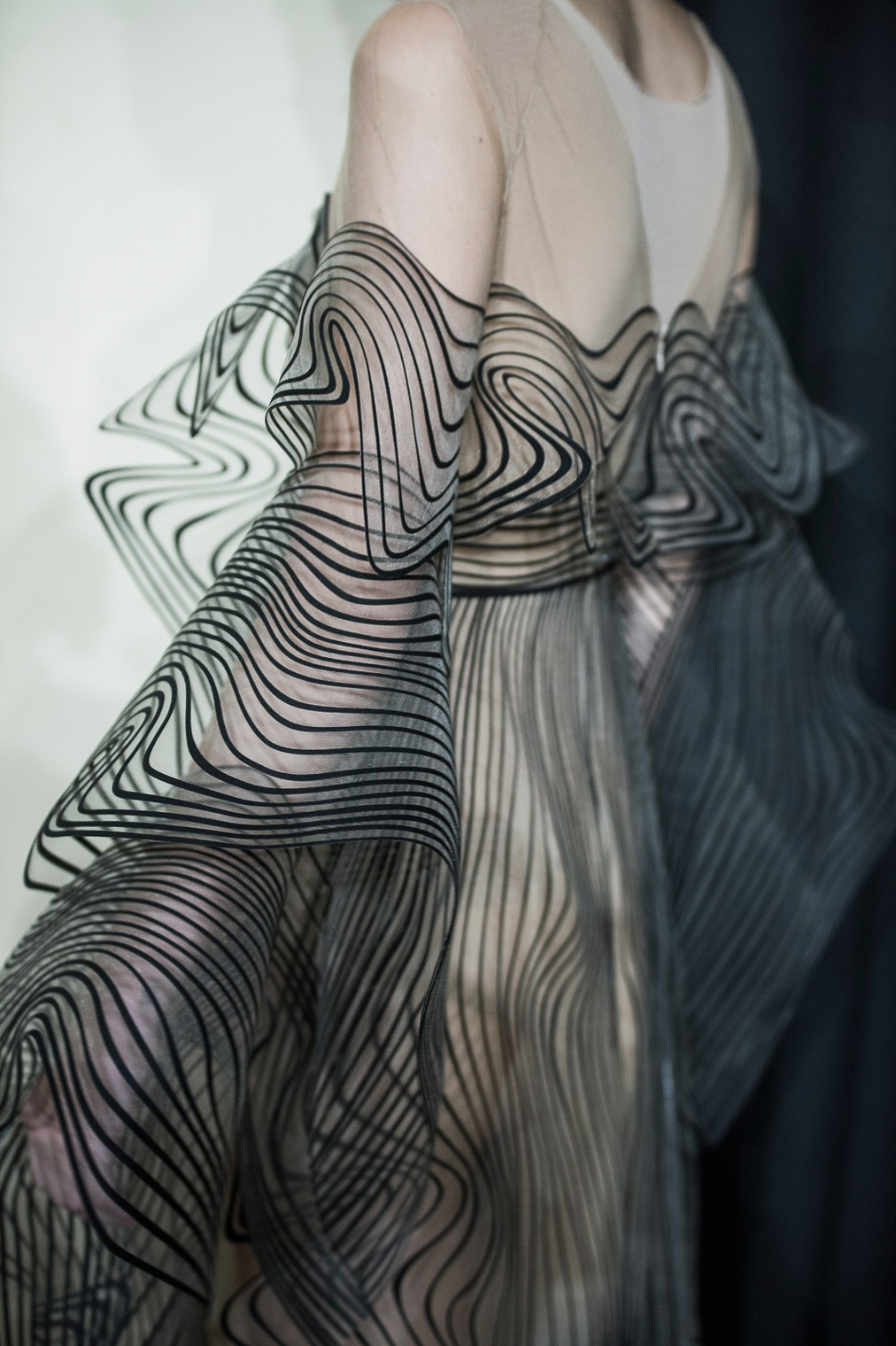 Iris Van Herpen is arguably one of the most gifted young couturiers in fashion today, and is leading the tradition of the couture craft into the future, with finely detailed creations made using 3D printing. The Dutch designer didn’t disappoint for the 10th anniversary of her eponymous label. Held in the Cirque d’Hiver Bouglione, guests were warned to keep their phones off so that the venue could be drenched in darkness. Then, as light slowly began to emerge, a series of water-filled tanks revealed musicians playing haunting instrumentals. Sculptural organza danced around the models like whimsical waves. Van Herpen used thin wire, shaping them into out-of-this-world forms that compared to a work of art that used the human body as its canvas. Beautiful, ethereal, and otherworldly, Van Herpen’s designs put the designer in a league all by herself.

The setting itself was a premonition of what was to come for Jean Paul Gaultier’s Fall 2017 couture show, where seating assignments were littered with the cheeky phrases “Gstaad” and “Alps.” Surely enough—despite the heat outside that measured in at nearly 90 degrees—it started to snow inside Gaultier’s Rue Saint Martin studio. It was officially winter in July as a number of cold weather motifs—pom-pom-topped beanies, puffer vests, and thick, chunky fair isle sweaters—appeared on the runway. The signature Gaultier marks, like a burgundy pin-striped suit, were there, and the designer mixed that in with chic, masculine-meets-feminine looks—like an exquisitely tailored skirt suit and a one-shoulder, deconstructed camel jacket that were oh-so Gaultier. The collection was no doubt après-ski in a way that only Gaultier could do. 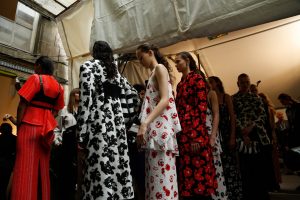 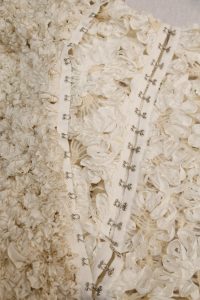 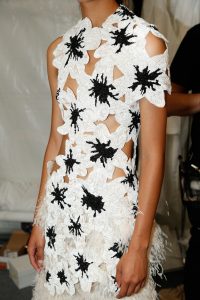 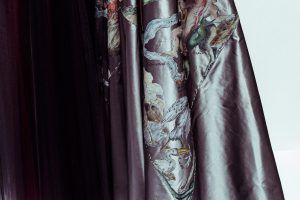 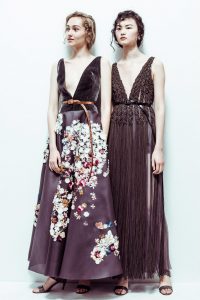 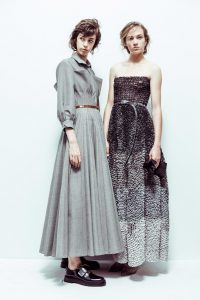 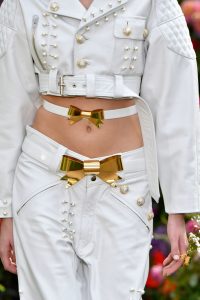 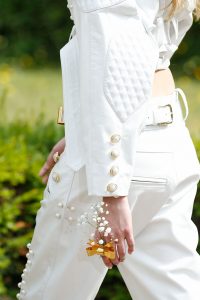 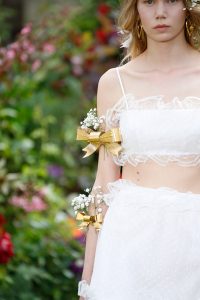 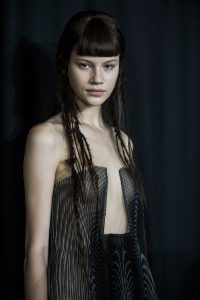 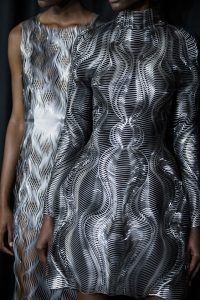 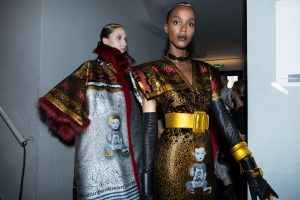 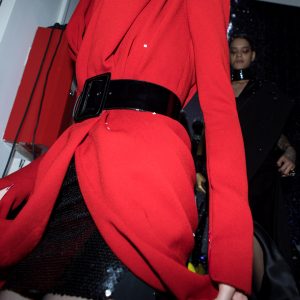 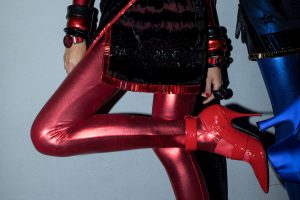