Patrik Ervell presented his rain-ready take on retro athletic-wear for Spring/Summer 2018. The tops consisted of window-paned shirts and jackets, flighty nylon windbreakers reminiscent of the hiking brands so popular back in the 90’s, and pared-back coats belted at the front by sturdy straps. Grounding the collection were bulky “polyurethane leather” shorts and thick-soled retro shoes, which must have come straight off the mountain.

In a humidity soaked, neon infused Chinese fish market, Raf Simons proved himself the main attraction of New York Fashion Week Men’s. His Spring/Summer 2018 collection was built off cultural references—”Blade Runner” and surrealist graphics from Joy Division and New Order by Peter Saville—that produced a movement of formation and creative evolution. Each of Simons’ “replicants” marched down the moisture-drenched street clad in wide brimmed, traditional rain hats matched with umbrellas and market-ready galoshes. Rounded and elongated coats in both leather and checked wool played off the skinny models; oversized sweaters were disheveled and thrown off one shoulder; trousers were cut off at the knee as tailoring swirled around and clung to each’s body.

While many opted for a statement for Spring/Summer 2018, Boss offered a straightforward vision. Filling the collection were monochromatic looks and ultra-relaxed tailoring in the form of double-breasted, notched-lapel lightweight jackets, stone-washed suede shirts, and relaxed, pleated trouser shorts. Elevated workwear was marked with nautical flags and the “H-B-N-Y” logo, and loose-fitted pants were held up with metallic belts. No political leanings and lessons here, just traditional yet serene menswear to be simply enjoyed. 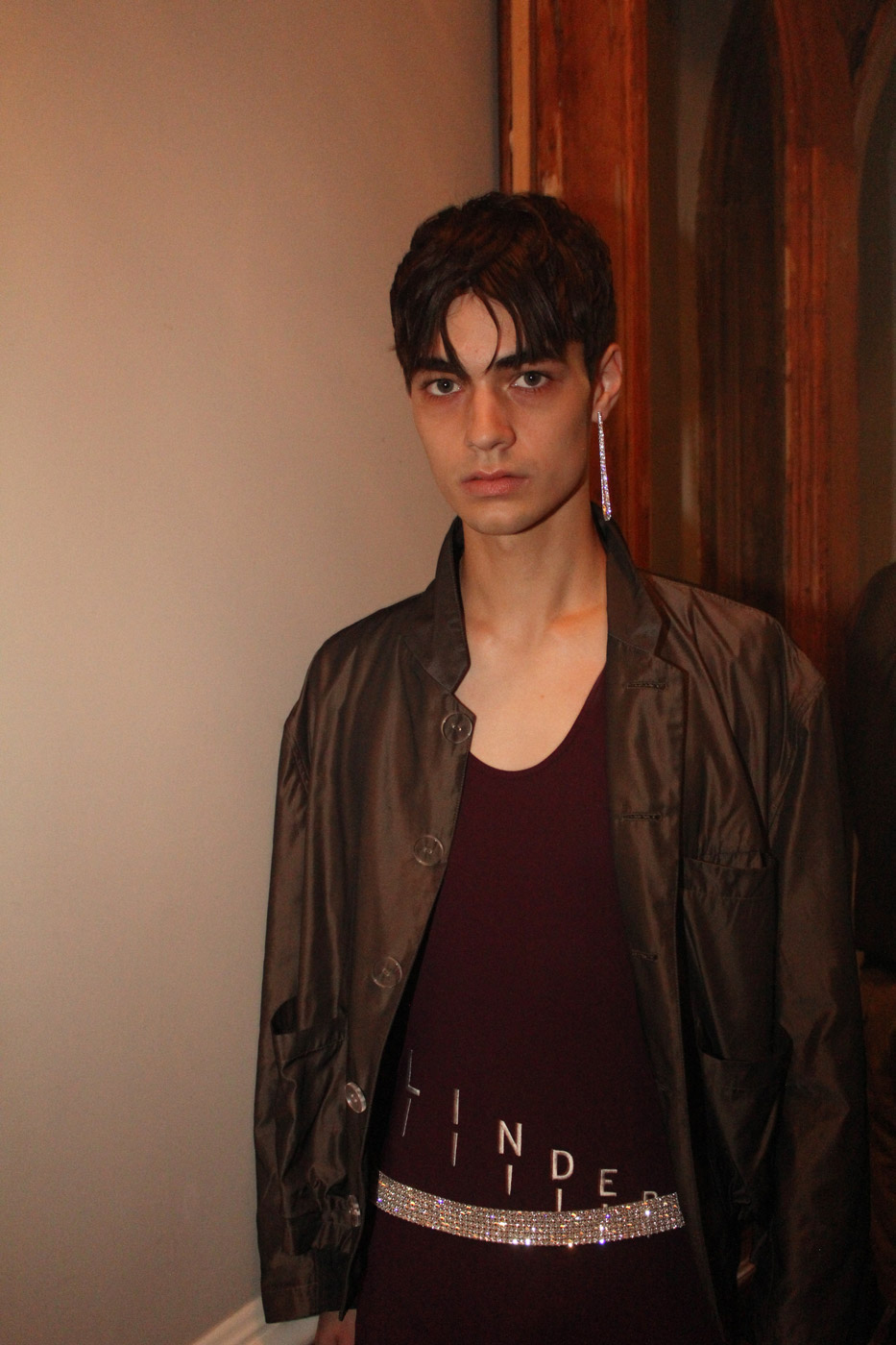 Somewhere between pure utility and a sort of nostalgic, dark glamour, an interesting mixture presented itself at Linder’s spring presentation. The former was dressed in the likes of dark smock dresses strapped together, ready to be taken apart as well as pants that could efficiently be turned into shorts. His counterpart was that of a late 90’s club kid: patchwork jeans were slung low and enveloped sandals, mesh shirts bared chests, and diamonds covered both belts and the wrists of a silk shirt. There was plenty of skin shown but the focus was on the desire for adornment and the beauty of function.

Feng Cheng Wang started her spring collection off with a proud statement against anti-Chinese sentiment with “Made in China” plastered on the line’s introductory T-shirt and then featured heavily throughout the rest. Large fanny packs formed the letters “M-I-C,” as she declared her pride for Chinese innovation, forming candy-red workwear cinched throughout the silhouette and bright pink outerwear.

Daisuke Obana of N. Hoolywood decided to turn back to one of America’s most stylish Presidents, John F. Kennedy, for his traditional Spring/Summer 2018 line. Forming the collection as a chronicle of JFK’s life, classic tailoring was sent through relaxed and cropped trousers, along with sharp suits and sweaters in the style of retro loungewear missing only a pipe and a glass whiskey. Offsetting this were collegiate and varsity themed sweaters and shirts, as well as light, pinstriped looks seemingly straight off the yacht. 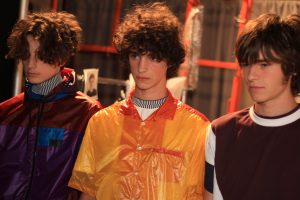 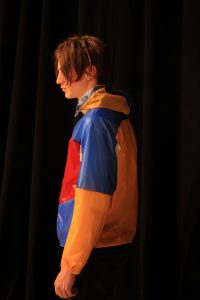 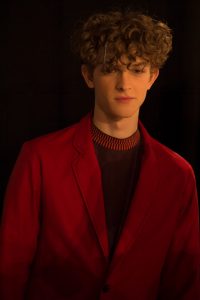 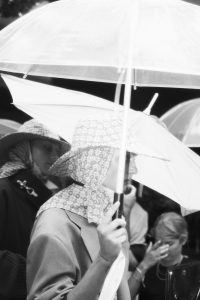 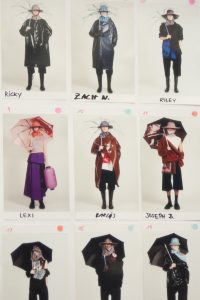 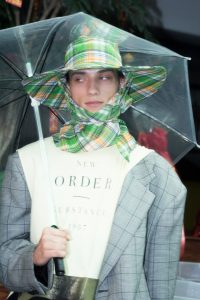 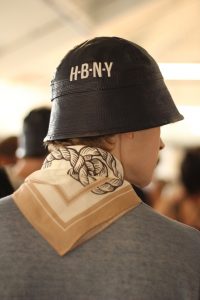 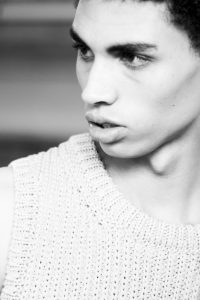 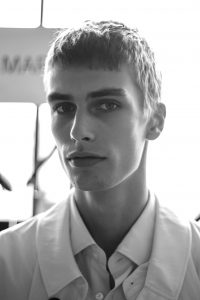 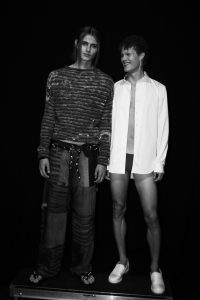 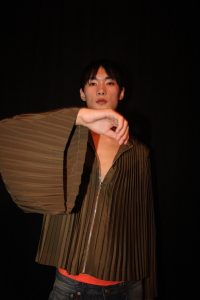 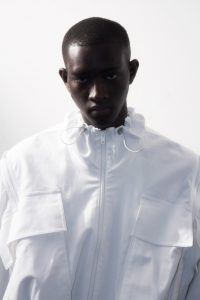 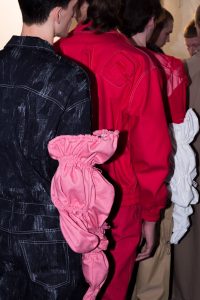 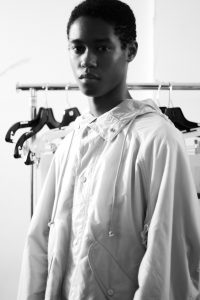 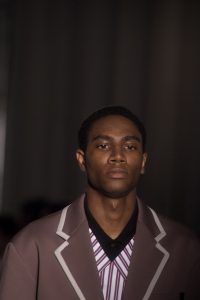 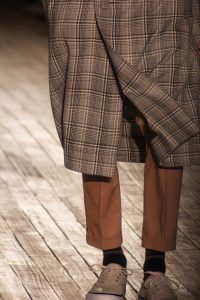 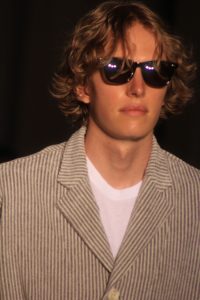