Carolee Schneemann has incorporated personal correspondence into her published writing since at least 1965, when she quoted a letter to the French artist and poet Jean-Jacques Lebel (who receives another missive here) in an essay on her most famous performance, “Meat Joy” (1964). Composed of a modest selection of seven email messages spanning four years, the present dossier highlights concerns found throughout Schneemann’s storied artistic career. Opening with a refusal of the ideological connotations of motherhood (even when offered in tribute by a younger female artist), she moves to connect, however implicitly, her feminist stance to other political struggles ranging from domestic racism to overseas war. An allusion to an installation-in-progress incorporating images of atrocities visited upon the Syrian people extends a lineage of overtly political work that includes “The Lebanon Series” (1983), devoted to the devastation of Beirut, and the film “Viet Flakes” (1965) and performance “Snows” (1967), both chronicling American brutality in Vietnam. Despite Schneemann’s reputation as an artist of near-Dionysian sexual ecstasy (traceable to her early affinity for the dissident psychoanalyst Wilhelm Reich), a deep strain of mourning has always coursed throughout her oeuvre, from the dead chickens and fish among the otherwise erotically rapturous “Meat Joy,” to the more properly elegiac installation “Mortal Coils” (1994-1995). While this dossier frequently leans toward the melancholy, its counterpart is found in the email to Paul Rucker that—despite opening with the emotional trauma induced by the video of Philando Castile’s death—concludes with a more buoyant observation of the natural life (green plants and hungry rabbits) around Schneemann’s home. Running throughout all the texts is Schneemann’s profound ethics of care, expressed to longtime friends and supporters (Lebel and art historian Kristine Stiles), fellow artists from several generations (Rucker, Ingrid Christie, Christian Marclay, and George Gittoes), and, via imagery, her artistically-inclined feline companion, La Nina. 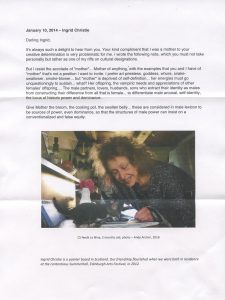 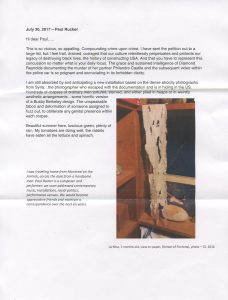 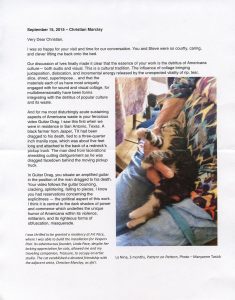 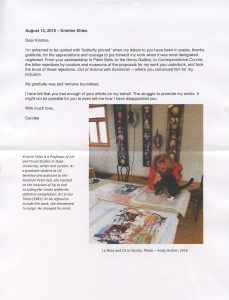 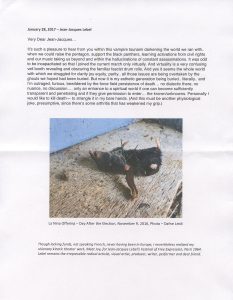 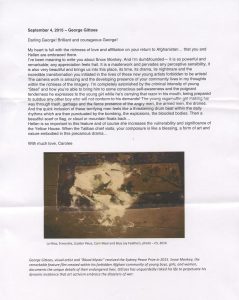 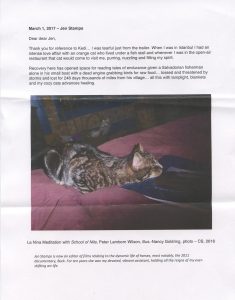