A takeover of check patterns occurred at Hermès Spring/Summer 2018, through the rather equestrian cape which led off the collection and the slim tailoring that provided a subtle base throughout. Other prints made appearances to keep this an expressive season, with contrasting stripes bending the eye, illustrated prints, and winding bands of leather woven together to provide a refined sculptural presence.

Maria Grazia Chiuri opened her collection for Dior once again with a shirt branded with a feminist statement: “Why have there been no great women artists?” Proving that she is determined to make her mark on the brand, Chiuri introduced denim onto the runway in the form of two-toned pants and blazers, as well as berets. There was a blending of worlds and lifestyles on display with leather motor-bike jumpsuits alongside sheer, underwear-revealing dresses, and impeccably tailored jackets with waists nipped in—formal and decidedly feminine.

In the second Kenzo La Collection Memento, which pays homage to the house archives, Kenzo creative directors Carol Lim and Humberto Leon decided to start off their show with a bit of theatrics. Ambitiously treating the show’s guests to a 30 minute kagura performance by a traditional Japanese theater group, Lim and Leon reflected upon the past, taking inspiration from the history of Kenzo Takada and his first foray into denim. Full denim workwear looks were their tribute, in rust and dark indigo with contrasting stitching, flowing then into print-heavy, japan-inspired bamboo, tigers, and graphic clouds.

Andreas Kronthaler for Vivienne Westwood
A visual feast. As with most Westwood shows, Spring/Summer 2018 by Andreas Kronthaler for Vivienne Westwood was a cacophony of texture, “bad-taste,” and lots of bare skin. Picturesque scenes of rural Renaissance bliss were printed onto dresses, pants, and a cape, as the countryside ran deeply throughout the collection. 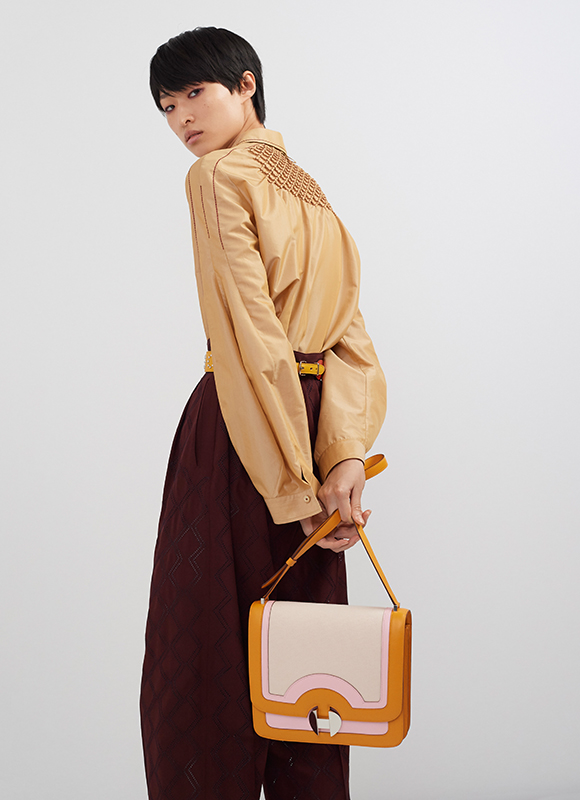 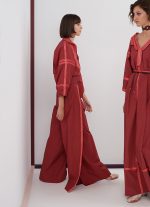 Chanel
Akin to the future that André Courrèges and Paco Rabanne imagined in the 1960’s and 1970’s, Karl Lagerfeld imparts a vision that is crisp, bright, and full of optimism for Chanel Spring/Summer 2018. This time situated in a natural retreat; an idyllic scene of stylish seclusion with transparent plastic boots, ponchos, and visors protecting against mist from a nearby waterfall. Mod silhouettes flowed throughout—curve hugging and thigh revealing—and were doused in pale shades and classic Chanel tweed.

Y/Project
Glenn Martens continued to capture youth and energy in his Spring/Summer 2018 collection for Y/Project, transforming mundane clothing into adjustable, romantic, and subverted statements. Footwear was coiled up around the legs, with large strips of suede or with subtle and romantic bands of leather adorned with flowers. Martens induced eroticism into the collection with preppy sweaters bunched and pierced with jeweled nipple clasps, along with nude tulle, rolled and formed over the clothes beneath, shrouding and distorting the figure.

Stella McCartney
Eco-conscious has become a staple for Stella McCartney, and her Spring/Summer 2018 collection was no exception. McCartney proved that faux leather can look just as luxurious as the alternative—with a low-cut twist-top and an incredibly supple pair of caramel colored trousers. Dashes of hot pink washed over the collection, adding a vivid pop along with magenta, red, and acid washed denim.

Lemaire
Glamor exuded from Lemaire Spring/Summer 2018, as Christophe Lemaire and his wife Sarah-Linh Tran draped their models in glossy satin. Voluminous pleating worked with the rest of their pared-back style, clad in rich hues of plum, burgundy, and sapphire. A supple glamor usually reserved for passing glances.

Atlein
Antonin Tron of Atlein continued his work with jersey for Spring/Summer 2018, crafting looks that clung to and swirled around the body, infusing it instantly with an easy-going sensuality. Tron decided to lead with the unfamiliar, sending out a fitted khaki jacket with off-kilter pockets and impeccably tailored shorts to match. Overall, his collection was one of romanticism, with jackets and dresses contorted yet still brought close to the body, keeping an innate sexuality imbued into the clothes.

Nehera
In the first collection since the departure of artistic director Samuel Drira, Nehera’s Spring/Summer 2018 collection—produced entirely in-house—was understated and airy. Quiet tones of ivory, stone, pale yellow, and navy brought a certain form of mediation to the tailoring, with cinching at the waist and bags worn at the hip grounding them in determined usefulness. 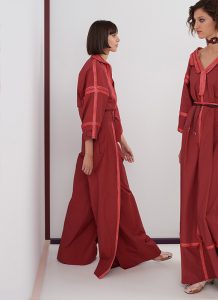 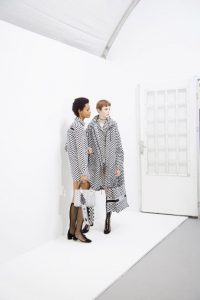 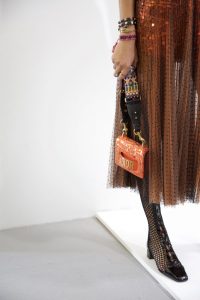 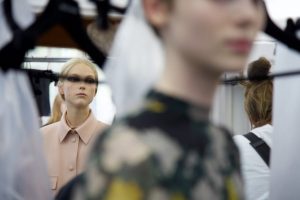