If science fiction reflects our innermost fears, how do we see ourselves today?

Based in Chicago, Noah Berlatsky is the author of Corruption: American Political Films.

We are fascinated with the end of the world, and have long used science fiction to reflect our cultural fears. The meteor hits, the epidemic spreads out of control; the monsters eat everyone; flood, fire, famine, or tentacles descend. As the pioneering sci-fi writer William Gibson once said, “The end of the world is universal shorthand for whatever we don’t want to happen.” There are a million ways to die, and every era in history has had its own anxieties shaped by moments of the time, but why? What is the relationship between those apocalyptic anxieties and the politics and cultures of their times? In times of colonialism, people cried out against foreign enslavement through “The War of the Worlds.” In “The Terminator,” during the Cold War, we feared nuclear holocaust. Today, through “Black Mirror” and “Westworld,” it seems that we have trouble seeing any future ahead of us—the imagined future looks very much like the present. We’ve run aground on an apocalypse that we’re living in.

Science fiction as a genre coalesced during the age of colonialism, as European nations invaded and conquered foreign territories and peoples. When Columbus landed in the Caribbean in 1492, he demanded gold from the Taíno people, while his men murdered and raped their way across the islands. Within a few years, the pattern was repeated across the hemisphere, and soon the sight of European travelers meant the end for many peoples’ worlds. As they wiped out the Aztecs, or enslaved West Africans, these Europeans felt powerful and righteous. But they also began to speculate nervously about what it might be like if someone else invaded them.

George Chesney’s influential novella “The Battle of Dorking” is one early piece of proto-science-fiction colonial anxiety. Written in 1871, the story imagines a rising Germany that wages a surprise war on England across the North Sea. Unprepared, the British army is quickly defeated. The author, an officer in the Royal Engineers at the time, was concerned that his home country had allowed its military forces to weaken. Just as ticking time bomb scenarios—such as those in the television show “24”—are used to ignite antiterrorism legislation, Chesney’s nightmarish vision of German occupation was intended to inspire a larger spending for Britain’s defense. In the same period, “The War of the Worlds” by H.G. Wells had a goal different from Chesney’s omen. Rather than campaigning for more force, Wells used the same conceit to force Europe to rethink its colonial endeavors. This time the colonizers weren’t the Germans, though. They were Martians.

Published in 1898, Wells’s story begins with strange explosions on the distant surface of Mars. As these Martian ships soon make their way toward Earth, the humans, watching in awe, hope these visitors are friendly. Eventually it becomes clear, though, that the space creatures are no more peaceful than Columbus himself. Crawling out of their cylinders, the tentacled Martians overtake the British army as England becomes subjugated. The author presents this extraterrestrial invasion as a just recompense to European invasion. “The Tasmanians, in spite of their human likeness, were entirely swept out of existence in a war of extermination waged by European immigrants, in the space of 50 years,” Wells wrote in the novel. “Are we such apostles of mercy as to complain if the Martians warred in the same spirit?”

Wells’s story did not end colonialism. Instead, its most dramatic effect on the public occurred some decades later, when Orson Welles performed it on the radio in the U.S. in 1938, transplanting the Martian invasion from England to New York. Presented as a series of live updates, the radio drama debuted as war brewed in Europe. On air, actors issued “news bulletins” detailing the escalating Martian attacks on Earth. Many listeners famously believed the broadcast to be true, and called police and government officials in concern. With war in Europe looming, apocalypse seemed just close enough to be believable.

As the Cold War began, end of the world invasions were less about conquest and more about infiltration. The 1956 film “Invasion of the Body Snatchers,” for instance, is set in the fictional town of Santa Mira, California, where people have been replaced with body duplicates grown from alien space pods. The clones look exactly like those they replaced, but have no individual will. As Senator Joseph McCarthy claimed that communist sympathizers had secretly occupied positions in the State Department and the military, and Julius and Ethel Rosenberg were executed in 1953 for providing military secrets to the Soviet Union, this sci-fi imagining shot to the heart of everyday fears. Americans weren’t afraid of conquering armies, but of secret spies, who could overthrow the country before anyone even knew that they were there. McCarthy and J. Edgar Hoover attacked anyone perceived as alien and different; fear of conformity led to enforced conformity.

“In this world, humanity does not look ahead to futuristic destruction, but, instead, it looks back, nervously over its shoulder, at the past coming up relentlessly from behind.”

This phobia of infiltration was only one of the Cold War’s apocalyptic visions. Another was nuclear war, such as in the 1983 television movie “The Day After,” which viewed the American heartland devastated by nuclear warfare. Reagan, who saw the movie ahead of its release, admitted that it inspired him to push for arms control. In “The Terminator” franchise, nuclear weapons are an iconic symbol of terrifying technological advancement. Like the nuclear bombs of the time, these weapons have become so powerful, that they—not the humans that created them—control human destiny.

Following the collapse of the Soviet Union in 1991, nuclear anxiety became less prominent in science fiction. In one way or another, though, fears of technology have remained a common theme. The 2004 film “The Day After Tomorrow,” for instance, presents a climate change apocalypse, in which greenhouse gases caused by human machines pumping carbon dioxide into the atmosphere have led to global cooling. “Avengers: Age of Ultron,” from 2015, involves a networked intelligence coming to life—an update of “The Terminator” for the internet age.

Social fears have sparked recent apocalypses today as well. The 2017 film “Life” reimagines Martian invasion as a kind of terrifying immigration disaster. A globular C.G.I. life-form evades multiple quarantine protocols to make its way to Earth, where it can wreak devastation and despair. Terrorism, too, has provided fodder for many apocalyptic fictions. “London Has Fallen,” from 2016, in which terrorists destroy Britain’s capital, is one of many recent examples.

The most important aspect of today’s science fiction is the way that so much of it avoids radical change or destruction. Rather, it looks to threats that have already happened. The rise of the zombie apocalypse in television shows such as “The Walking Dead” or films like “World War Z” doesn’t imagine the future destroying the world, but rather the past eating the present. Zombies are an atavistic, semi-supernatural nightmare of the past, returning and dragging the world back into an animalistic pre-civilization war of all against all. In this world, humanity does not look ahead to futuristic destruction, but, instead, it looks back, nervously over its shoulder, at the past coming up relentlessly from behind.

Nearly all of today’s most popular science fiction examines a near future in which the world is much like it is now—only a little more so. HBO’s “Westworld” is set in an amusement park where visitors wander through Old West scenarios, slaughtering robots. Each episode of the television sci-fi anthology show “Black Mirror” similarly represents this all too-near near. In the episode “Nosedive,” society is hierarchized by social media ratings. Those with high ratings can enter certain buildings and receive mortgage rate reductions. Those with low ratings must loiter in solitude. The result is an apocalypse of enforced niceness; everybody is hyper-polite to everyone else in order to get ahead. Instagram likes—or rather, the lack of—have become the new nuclear bombs. Another episode, “San Junipero,” explores a Virtual Reality that allows people to visit past decades —the 70s, 80s, 90s, and on. Before each person dies, he or she can upload his or her mind and live forever in the nostalgic dance party of their choice. The eternal now may be a kind of apocalypse in itself.

“Today, technology, more so than ever before, means self-imposed isolation—not just from others, but from our own emotional experiences and internal environments.”

Perhaps we are so fond of this interpreted sense of the near future because society is already living in the future itself. Cornell University’s Jenny C. Mann, a professor specializing in dystopian fiction, once explained that the genre is always defined by “the creation of alternate societies through the negation of despised aspects of the real world.” Arguably, we’ve reached such an advanced state that the present seems like science fiction now more than ever. The “despised aspects” of today are held in equal parts affection. We can order almost anything, at any time, and have it drone-delivered within the hour. Through “intelligent” assistants, we can play nearly any song or turn on any light by voice request. Is it possible that we’re less afraid of an unknown than what we’ve created for ourselves?

While we still do not have faster-than-light travel such as “Back to the Future” or teleportation technology like that envisioned by “Star Trek,” lines between technology and the interior landscape have largely blurred to the point of indistinction. We go to bed with our iPhones by our pillows and wake up to internet wars spurred by an unhinged leader. Sci-fi has always reflected our fears and interests as related to technology—the word “technostress” describes the link between negative psychological states and the introduction of new technology; but today, technology, more so than ever before, means self-imposed isolation—not just from others, but from our own emotional experiences and internal environments.

When we look into the future we see not the end of the world, but more of the same, an iPhone looking back at us and filtering our perceptions. Today, we don’t look for an apocalypse: In a darker, quieter sense than we imagined, we are already there. 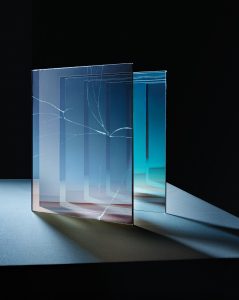