Before the lights dimmed for Christopher Bailey’s final show for Burberry last weekend, the enormous, industrial pendulum lamps suspended from the roof swung back and forth, keeping weighty time over the audience, as though a squall of energy had just ripped through moments before. Set in the Victorian warehouse of the London Dimco Buildings built in 1898, the space originally served as the power station for London’s Central Line Underground. As the name suggests, the train’s course cuts straight through the heart of the city, not unlike the vast references of the evening’s show. And though the metronomic gestures of the fixtures were part of an art installation, ‘Our Time’ by London-based United Visual Artists, it could have been a presage of the presentation itself.

Considering his 17-year tenure at the helm of Burberry, it’s little wonder that Christopher Bailey’s swansong would be inspired by and, in fact, entitled, ‘TIME’. In just over fifteen minutes, Bailey mused on the house archives as much as its future. Heavy in optimistically disparate references, the collection was a love letter to Britmania, entropic youth and subculture, a multi-sensory manifestation; a kind of tornado, capturing everything it its path, gaining layers and mass, its cumulative power breaking boundaries and limits. The cache of a celebratory chaos was a theory that prevailed throughout.

This assembly came punctuated by a new capsule, not simply inspired by the house archives but pulled directly from them. Styles from the 80s an 90s were reissued to form an entirely unisex wardrobe and spliced together throughout the main collection. The result was schizophrenic looks such as a rainbow-painted ball gown skirts in paper cotton, styled with the capsule’s graffiti-printed fleece hoodies that submerged the wearer, despite their chromosomal makeup.  A mish-mash of eras and genres saw punks in tartan check trouser-kilt hybrids or bondage-strapped leggings keeping pace with Madchester shell suits in vintage scarf prints, intricately embroidered flapper-esque frocks, 1996 piqué polos and waxes gabardine car coats in Burberry check—all stamped with classic crests, original branding and making techniques that vacillated from the kitschy and artisanal to the futuristic. Support for the LGBTQ community was not simply suggested but a mandatory element of every look, whether through its introduction into the house check pattern or striated in the cascades of a faux fur cape. Aural reinforcement of the Bailey’s message come by way of a soundtrack mostly featuring Bronski Beat, an 80s Brit-pop trio whose songs were often catalysts for political commentary on pro-gay issues.

The show finished with a technicolor laser show that cast a rainbow canopy over the finale, a futuristic nod to acid house origins. Backstage, Bailey gestured at a through-line to it all. “Fashion needs context. There are so many quesrions being asked in the world now: about our values, about the way we live, the way we consume,” he told reporters. “It is a way for me to try and make some sense of all this chaos.” 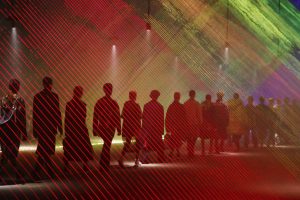 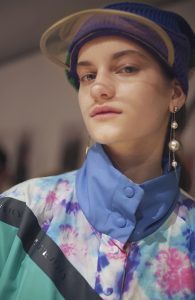 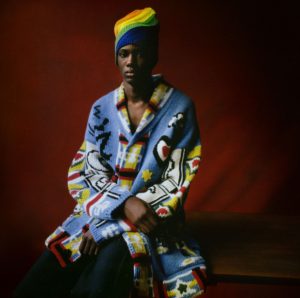 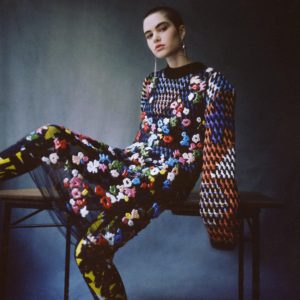 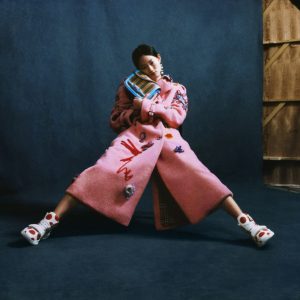