When the Surrealist movement first emerged, it was forefront of the avant-garde. Throughout the 1930s, as the movement grew in popularity in French and Spanish, a lesser-known Egyptian collective called Art et Liberté sought to address the same societal ills, violence and political causes their European counterparts were intent on uncovering through their new language.

This month, a new exhibition showcasing this less-heralded branch of surrealists comes to the Tate Liverpool.  Surrealism in Egypt: Art et Liberté 1938 – 1948 is the first extensive exhibit of the collective’s visionary works. For this week’s On Loan, Document spoke with Tamar Hemmes, Assistant Curator at Tate Liverpool, about the chaotic imagery Coups de Bâtons painted by Mayo, one of the collective’s most prominent members, in 1937.

Tamar Hemmes—Art et Liberté were an international group of artists in the 1930s, based in Cairo, Egypt, who wanted to create a global movement—not something that was just exclusive to Egyptian art. The group were anti-fascist and anti-nationalist and started after they published a manifesto called “Long Live Degenerate Arts,” in reference to the Nazi’s, who had labeled all modern art “degenerate art.” During the ten years they operated, Art et Liberté produced three journals; one in French, one in Arabic and one that was bilingual. In the early 1940s, they also ran two publishing houses in Cairo that published everything from fiction to political pamphlets. There were two strands to the group: half were painters who created work that was Surrealist in nature but that responded to Egyptian life, and the other were writers, and both sides would often inspire each other.

Caroline—Can you give us an idea about the imagery in Coups de Baton?

Tamar—It’s a café scene from Cairo in Egypt, from 1937, a sight that many people would have recognized. These types of cafes were populated by intellectuals and critics of the situation in Egypt.  At the time, the bourgeois in Egypt had all the wealth, and although it was no longer a British colony, Egyptians were still under the influence of Britain so they had to divert their resources to help with the war. Cairo was littered with a lot of soldiers and the social-political situation was quite tense.

Coups de Bâtons is made up of peasant pastels colors—the blue sky looks almost like a summer or a spring day. But in the foreground, you can see a jumble of contorted human-like figures with stretched limbs. They almost seem to be broken. That’s when you notice it’s a painting of the dispersal of crowds by police brutality.

Both labor and student unions were protesting against how the poor were being treated, and the police would strike people with sticks to try and disperse crowds, You can see these batons being held up, that’s what the title of the work refers to, and people being strangled with ties, chairs being held up in the air and stones being thrown. It’s a really chaotic scene.

Caroline—Why is this piece archetypal of the Art et Liberté’s ethos?

Tamar—Because it combines elements of surrealism with recognizable motifs or images from Egypt, so people in Egypt would have been able to relate to it. In that sense, it captures what the movement as a whole is about.  At the time, the bourgeois were obsessed with an idealized perfect image of the human being, whereas the surrealists, and the Art et Liberté in particular, subverted this by focusing on a contorted body. But Art et Liberté were also quite critical of European surrealism.

The movement that we know it, is the Andre Breton-founded branch in France, but this group felt there were two parts. The Magritte and Dali strand was very dreamlike and all about the artists subconscious, whereas the other was about automatic drawing and writing. There was nothing recognizable in their work—it was all about what the artist thought.

Art et Liberté thought both sides were flawed. Magritte and Dali planned everything while the automatic ethos was too difficult for audiences to relate to. So they wanted to create an intermediary, using surrealist forms and conscious impulses but really combine it with recognizable symbols from Egypt. And that’s what you have in this painting. 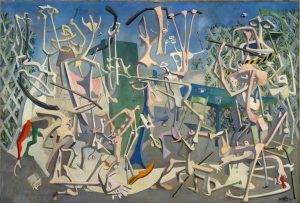