Artist Jon Rafman captures the anxiety unleashed by the aggregations of Russian trolls and Cambridge Analytica.

In glistening, antidepressant blue, a geist-like figure rises from the collapsed body of what appears to be a crash test dummy. Skeletal coils drift like smoke in the darkness. So begins Poor Magic, a 2017 video by Canadian artist Jon Rafman.

We are greeted by a blue template figure: a puppet standing in an endless voidscape. A slight lag pulls against its stumbling movements as an errant red cube strikes its head from above. The scene plays out like a broken pharmaceutical commercial or banal, affectless theater.

A group of human figures march into a spinning rectangle, dumbly, a relay gone wrong. They behave as sleepwalking zombies whose formation is gleefully scattered, sending figures reeling and collapsing splayed.

Their world is one of total rendering: they exist in the same plane as other dimensions that can be found in various corners of YouTube: Blender simulations and experiments of falling buildings, fluid crashing against invisible enclosures, and chess pieces splattering like goo.

Sometimes we are taken into a fleshy wormhole, as seen from the perspective of a surgical camera delving into an infected esophagus, and then further, into an indiscriminate Gore Zone of pulsating innards.

Our blue tour guide, through this pixelated carnage, resembles a sedated version of the Google DeepMind AI, struggling to teach itself how to run. It is sometimes visited by other blue and grey figures, all identical. The artist crashes these dummies together with an invisible hand, click-and-drag, throwing them about like ragdolls.

But Rafman saves the most catastrophic, violent treatments for his humans. The blue figure watches them from the Gore Zone on a large screen, as if within some Cronenbergian installation (or Rafman’s own). “Trapped in this shadow world my mind eats itself,” the narrator mutters. From an aerial view, bodies go flying in an invisible explosion. A shaky camera from a closer perspective captures a mass of people rushing forward, inarticulately flailing as if gushing from a tube. Some clusters of the human figures appear to be dressed as sports fans, a nod towards mob mentality and the production of sameness.  The figures are treated like a weather, or some other surging, uncanny hive entity: Ants spiral around an iPhone. Maggots cluster atop rotten meat. Soldiers goose-step.

In almost military fashion, the bodies march and run into walls. They are awkward digital flash mobs trapped in minimalist architectural structures, warring helplessly against their environment: both template and prison. Their accrual and distortion continues for several minutes, interspersed with a scene of the blue figure being piled full of flying weaponry. Morbidly cartoonish, it stands unfazed.

In the final scene, the blue figure crawls through the Gore Zone, a meatspace labyrinth of veins, tumors, nondescript organs, and fatty tissue. Towards what oasis, if any, remains unclear.

Described as “a beautiful yet terrifying rendition of contemporary consciousness,” Poor Magic was first exhibited in 2017 at Sprüth Magers in Los Angeles. Populated by replicas of human bodies, but completely devoid of humanity, Rafman’s video seems to propose some sort of technofascist ontological disaster. He’s already well known for works that are flamboyantly zeitgeisty. His L’Avalée des avalés (The Swallower Swallowed) sculptures pay homage to the “vore” subculture, while inverting carnivorous roles found in nature. Past installations and exhibition designs for his video works have included bizarre viewing receptacles such as ball pits and lurid digital accretions—as seen in 2013’s Still Life (Betamale), with its mesh of furries, hentai, and filthy keyboards exemplary of contemporary kitsch, colored with bathos and the sinister synth drones of Oneohtrix Point Never.

Does all of this amount to post-internet nihilism, or does some kernel of truth emerge from this surreal, nightmarish fantasy world? How do we go from dystopian niche to real political ramifications? In a sense, Rafman’s puppets are as real as can be. They serve as our reflections, doppelgängers buffering their way through a solipsistic collapse.

In March 2018, Facebook banned access to user information from Cambridge Analytica, an independent data analytics firm based in the UK. The rest you probably already know: the firm was consuming the personal information of some 87 million Facebook users through their likes, connecting them to other users through friend networks and third-party apps, developing extensive psychological profiles that accurately identified many user’s personal attributes, including race, age, sexual orientation, and political proclivities.

“Rafman’s mobs are figurative stand-ins for likes in a reality where clicks are currency and currency is votes.”

Per the paranoid political atmosphere associated with Russian trolls and bots (and the absurd-but-true fact that American citizens actively engaged with them without realizing they were being manipulated online), this certainly wasn’t the whole story. Sinister alt-right herald Steve Bannon was a stakeholder in Cambridge Analytica for a time. This was all revealed in The Guardian by a hilariously hackerish 28-year-old Canadian whistleblower who spearheaded the project, assigned with the task of developing a “psychological warfare mindfuck tool.” The whole story is still unfurling, with the media pointing towards solid connections between the firm and the Trump campaign. While there has been much hand-wringing, for many, the dissolution of privacy at the hands of an ubiquitous social media platform comes as no surprise. As disturbed users peeked into the back-end of how Facebook was labelling and tracking them with alarm, some shrugged off the Analytica expose as a systemic fact, working beneath the surface of a website where users willfully provided personal details for monetization.

Just a month prior to these revelations, thirteen Russians associated with hacking and providing false information through the shadowy Internet Research Agency were indicted by a United States grand jury. The IRA is a “troll factory,” a Russian oligarch-funded meme machine designed to spread misinformation on social media platforms. This dark economy of falsehoods was indisputably skewed towards discrediting the U.S. presidential candidate that political statisticians and the media had calculated to obtain a landslide victory. One IRA whistleblower who spoke to NPR described working full-time, day in and out, crafting the false identity of a Russian woman on LiveJournal. Outlandish stories were developed through this cipher. Her false identity became her blue puppet, miming convictions regarding a foreign power. Others reported that they managed up to three LiveJournal profiles, varying in opacities of “realness,” some with quotas of up to 80 comments and 20 shares a day of internally-developed content. The more, the merrier. As bots threw likes and sowed divisions, the blissfully unaware (and frequently internet illiterate) users exposed to this kind of contentious subject matter found new ways of validating their beliefs of America as a fractured, glitching society caught in the Gore Zone of an impossibly reductive paradigm shift. “If there was some creativity at the beginning,” another IRA employee said, “by the end that creative part was gone and we were all like robots.”

In Poor Magic, Rafman’s narrator states: “All I can perceive is the motion of bodies.” It is as if Cambridge Analytica’s AI is given a voice, sifting through digital footprints and farming personality profiles. Sports fans march hopelessly into ad blockers and firewalls. This is the phalanx of bots and ideological shells ganging up into a morass of digital flesh. In the chaos, it’s impossible to differentiate between decoys and the “real” figures falling for their gambit. A dubious conglomeration of false facts violently accumulates against intestinal barriers.

Ripe for the harvest, Rafman’s mobs are figurative stand-ins for likes in a reality where clicks are currency and currency is votes. In the failure to overcome their own bodies, they flail against walls and obstacles hopelessly, en masse, in network. Aggregate behavior becomes predictable, and dissent from the crowd seems hopeless. Conformity is coded.

Blissfully unaware that our actions are being controlled by the invisible codification of big data, we become “one.” Is this the utopian singularity we’ve theorized as the endgame for big tech and its successors?  In her book Architecture from the Outside: Essays on Virtual and Real Space, Elizabeth Grosz explicates several subjects important to Rafman’s oeuvre: virtuality, embodiment, excess, and duration, among others. However, it is her critical assessment of the utopian concept that seems particularly prescient to Poor Magic. Identifying the historical problematics of utopia, Grosz writes that “the utopian mode seeks a future that itself has no future, a future in which time will cease to be a relevant factor, and movement, change, and becoming remain impossible.” Rafman is determined to dissect this proposed utopia, exposing its guts in graphic CGI.

Poor Magic begins with the cryptic statement: “If you can’t sleep at night, it means you’re awake in someone else’s dream.” One thing is increasingly clear: we are certainly not asleep. 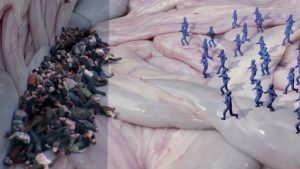 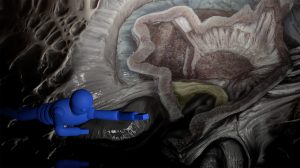 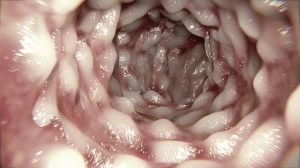