In this cover story from our SS 2018 issue, an exclusive look at an original portfolio of work by Lorna Simpson for Document.

The artist Lorna Simpson, born in Brooklyn, New York, in 1960, may be best known for her incisive photo-textual works that explore the relationship between image and word, and the murky spaces between meaning and intention. Language becomes a material in Simpson’s work, with a specific emphasis on its slippery, ungraspable nature, and how it shapes, marks, and polices space and those who inhabit it. Her works mine double entendre as well as descriptive systems, and the plethora of objectifying, debasing, and dehumanizing terms the English language has applied to black, and particularly female, subjects. Simpson recently returned to painting after a two-decades-long pause, and she has found another space to excavate and expand upon some of these questions. The exclusive portfolio of collages the artist made for Document, featured on the following pages, explores these same linguistic associations and slippages, this time through a pictorial lexicon. Advertising and lifestyle images take on strange new meanings through Simpson’s cutting, editing, and recomposing. Architectures adopt human tropes, and humans become hybridized with forces of nature, particularly that of ice. As a noun, verb, and suffix, “ice” holds varying, paradoxical, and overlapping meanings, so it is no wonder that Simpson is drawn to it. It is a capacious medium to think through our current environmental and sociopolitical climate. Mining her extensive collection of issues of Ebony and Jet magazines from the 1950s–70s, itself a portal to the past, the collages materialize in space, as a Gesamtkunstwerk, a total artwork, and as an idea taking shape across planes, textures, and mediums. On the occasion of Simpson’s inaugural London solo exhibition, Unanswerable, currently on view at Hauser & Wirth, she spoke with Daniella Rose King, a writer and curator and the Whitney-Lauder Curatorial Fellow at the University of Pennsylvania’s Institute of Contemporary Art, about science fiction, time travel, and branching into new yet familiar terrain.

Daniella Rose King—Congratulations on your exhibition that just opened at Hauser & Wirth in London. Are you back in your New York studio now?

Daniella—Welcome back. I’m sure that prepping for the exhibition was a lot of work. How do you feel now that you’re back?

“Many of the images I work with become surreal when they are isolated. Those are the kinds of images I’ve always been attracted to.”

Lorna—It’s interesting because I feel very good about the show. I feel very relieved, in a way. It was an interesting process to get the snowball made for Woman on Snowball [2018], and just going with that. So I’m not feeling completely exhausted and depressed after the show. It actually feels very good and kind of freeing. I found the process to be different. I think the ability to have the work, and also consciously have the work in conversation with itself, is interesting. To play with certain ideas where the work is looking in on itself, or using the lens of the collages to think about how the paintings are arranged in different aspects. I haven’t done something like the configuration of that show much before, and it was really rewarding.

Lorna—It came from my daughter. From time to time, she’ll read me passages from something that either she is reading on her own, or that are school assignments. I can’t remember which book she was reading, but there was a novel and she just wanted to read me a passage she thought was really beautiful. In it, the narrator used the word ‘unanswerable,’ and immediately I thought, ‘I think I have a title for my show.’

Lorna—And my daughter said ‘What?’ She thought that was such a bad idea. [Laughs] She said, ‘You’ve got to be kidding me!’ I think it’s because it’s a word I don’t hear used very often. It wasn’t familiar to my ear. I really love that there isn’t a concise description, or that you can’t be reduced to a sound bite, so therefore that’s the title. 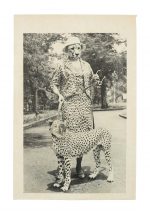 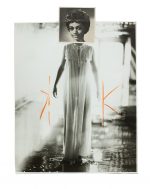 Daniella—And it’s also the title of the 41 photo collages in the exhibition, too?

Lorna—Correct. They’re very quick to make, and kind of related to my subconscious. I sort of just put things together over the course of about six to eight years. Not exactly sure when I started making them, but that is a selection of collages from a larger body of work that I thought fit in this show, in terms of content. I’m always making collages while I’m doing other things, working on other projects. To me, they seem to kind of reveal very binary relationships in terms of image, you know, the way they’re put together. I find it to be an interesting process of free association, what I come up with. So in that way, in terms of free association and idiosyncratic ways of collaging these images, the title Unanswerable seemed appropriate as a kind of starting point to thinking and looking into the meanings behind the show.

Daniella—Interesting. I’m really curious about what kind of transformations take place in the photo collages. Taking this very loaded material that is full of signifiers, perhaps you could say, and then creating these hybrid forms that are recognizably human, but they’re part animal, or they become architectural forms, or are overtaken by nature, which seems quite incongruous. I think there is a process that’s happening in the work, and it is kind of reflected in the title, too. Could you talk about language, and how that’s functioning in these works?

Lorna—I think my work in the past has played with language so much. Perhaps the collages play visually in a different way. One of the most obvious plays on words that occurs is maybe the photograph of the deer. You know, deer can be d-e-e-r and also d-e-a-r. I have been collecting images of these animals that are photographed as people and as domesticated wild animals living at home like a cat, kind of also positioned as domesticated females. So it was interesting to collect these images of deer, and also as in d-e-a-r. It is an interesting set of relationships that is played out in the collages. I think language plays a role in the scale, and plays a role in the work. Particularly in terms of Woman on Snowball going from a small image to a sculptural work that someone made next to an architectural element, so it was transferring those dimensions from a photograph into a three-dimensional work. I think I was playing with different lenses through which you can look at things, and maybe quite literally look through. All of these images are constructed and collaged together to a certain extent, and have this formal quality of collage as a process. 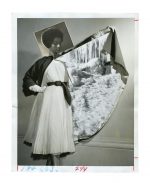 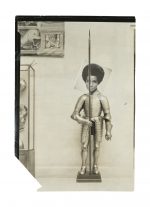 Daniella—Even just the simple act of stacking the magazines that you use for the collages, which takes them from a 2D to a 3D object, is super interesting. I suppose a way of describing it would be collaging in space, perhaps. The way that all the different forms, and the interdisciplinary approach that you have, are all a part of the same process, but materialize on different planes or as different surfaces. I came across a quote where you described the use of Ebony and Jet magazines as a ‘compression of time.’ The images are not nostalgic, but they hint at a compression of time and the similarities between the present and the past. I thought that was a really fascinating way of putting it. Perhaps one could similarly apply that notion to our current sociopolitical moment here in the U.S., and also in Europe. It’s a reversal of progressive politics and of basic civil liberties that we may have taken for granted. I think it’s interesting to think of it like that; the past revealing itself in the present. Going back to language, the slipperiness of that is fascinating. There are slippages that can take place, or even ruptures perhaps, that may be a way of thinking about the temporal landscape. It is not necessarily linear, but has places where it repeats itself and is circular.

Lorna—I think I do agree that there seems to be a sense of wanting to retreat to a certain level of conservatism. I don’t think it is permanent, but it’s these last throes of where the demographics of countries and continents are shifting—in terms of their populations. I think there is fear of change and that fear of change is resulting in the desire to retreat to the past. I think it will just take time for people to become aware that this is not anything new. There is one foot in the deep and dark past. However, our future also has one foot in the hope of what things can be, which I think is visible and hard-won, in a way. It’s such a political commitment.

Daniella—Could the ice then be a space for a possibility of recovery as well? Not a retreat necessarily, but it has the potential to be a contemplative space, perhaps.

Lorna—I think the reality of what the next 20 years will bring is certainly not that. It’s almost like watching a science fiction movie. The desire for the past is so strong. The current administration wants to build a time machine, but it is impossible to build.

Daniella—I think it’s interesting that you mention sci-fi because that’s also something I think about when I look at your collage work. In particular, there’s a cinematic aesthetic from the ’60s and ’70s, which I’m sure is very much due to the materials you’re using and the time period they come from. Is that a field of interest for you at all?

Daniella—You are working with such a large archive. I can imagine that amount of material could span an artist’s entire career. But are there any other materials you are interested in working with? Are there other materials that you are mining for your next project?

Lorna—I’m quite happy where I am at this moment. I haven’t really thought about that. 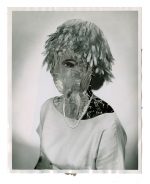 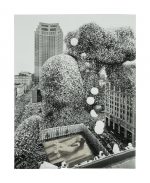 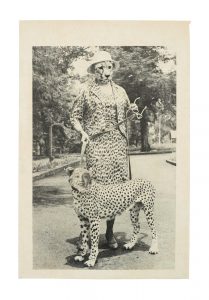 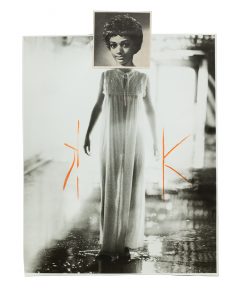 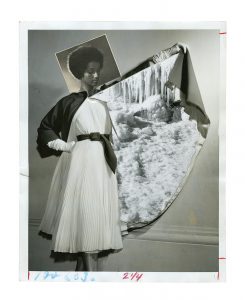 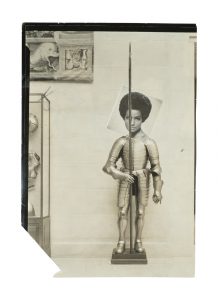 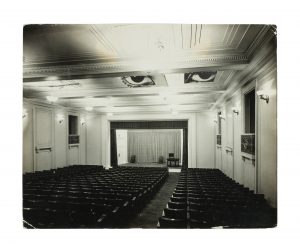 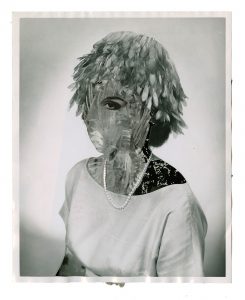 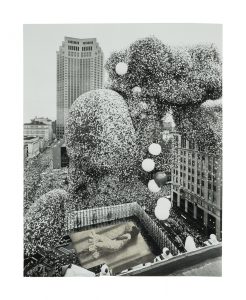