Anders Christian Madsen is the fashion critic at British Vogue and loves a palace.

The creative directors of Jil Sander have brought their fusion of elite and cult style to the brand's minimalist halls.

Few new fashion constellations sum up the spirit of our time better than Lucie and Luke Meier. When they joined Jil Sander as co-creative directors in the spring of 2017, the media quickly pinned down this married couple’s “thing”: he came from a background in cult streetwear at Supreme and had founded OAMC. She was the haute couture designer, and had served in the ateliers of Christian Dior and as interim head of the house between designers. This was a meeting of cool and chic, a marketing-savvy fusion of new-school and old-school in the minimalist halls of Jil Sander. It was the best of both worlds creating the ultimate balance in streetwear and tailoring. “It’s not a very modern way of thinking about things,” Lucie states quietly, flanked by her partner in crime. “We’re not actually that different as people, even though our experiences would seem so,” Luke explains.

Seated side by side in a dim corner of the bar at The Connaught in London, the Meiers exude the union conveyed in their statements. They’re dressed all in darks; Luke in a quilted black OAMC jacket with navy gabardine trousers and a black military knit from the Fall/Winter 2018 Jil Sander collection, Lucie in a black Chinese jacket, black plissé skirt, and black platforms, all from her extensive Comme des Garçons wardrobe. “I never counted,” she says, shrugging, when asked how many pieces she owns. “Never enough, though.”

If we were on Instagram we’d hashtag them “couple goals,” and you can imagine how their polished, united front could seem intimidating to some. But their poker faced good looks quickly reveal a talent for well-versed dialogue. The Meiers don’t chat. They converse. With his analytical approach to everything, Luke is the more outgoing. Lucie, blonde, doe-eyed, and beautiful, is more reserved, although just as opinionated. “I think it’s more interesting that we’re a man and a woman working together, than the brands we’ve worked at before,” she shoots back.

It’s an interesting thought in a time when the dynamics between men and women in the workplace are being investigated like never before. Here is a couple that lives and works together, fusing their minds into one creative expression. “No, we don’t fight,” Luke says, answering a clichéd question. He explains their differences in terms often used to describe men and women: “I’m much more analytical. Lucie is more about feeling and intuitive reactions to things. But we’re both quite sensitive and emotional people.” She loved the artisanal sensibility of the macramé pieces they showed in their debut collection for Jil Sander in September 2017; he, the puritanical white poplin shirtdress that opened the show. They staged it in an optical white walled-in runway in Milan’s open air, the sun casting a warm light over the chilly Jil Sander starkness as it set in the distance. “The biggest mission for us was to bring soul into the collections, to feel the sensuality. We have a very personal approach to the work,” Lucie explained the day before the show, as Castello Sforzesco filled up the skyline outside the Jil Sander headquarters.

“When you talk about minimalism it has a very cold connotation, but in terms of the work it’s really important for us to bring a soul and a softness,” Luke elaborated. After their appointment in March, the Meiers traveled to Hamburg the following month for an audience with the founder, who no longer owns the brand. “There were quite a few things that made us feel good,” Luke recalled of their meeting with Ms. Sander. “We talked about the way we see things. She was very encouraging, sharing her ideas about her approach to design and what she believes in.” Fast-forward to our rendezvous in London in February, and there’s still no need for concern, even if Sander hasn’t given the Meiers a personal review of  the collection that carries her name. “Not to us, but we hear positive things,” Lucie says. “We hope she’s happy,” Luke concedes. His time at Supreme, between 1999  and 2008, was Sander-centric by way of James Jebbia’s dedication to wearing the brand. For Lucie, the house was synonymous with her mother, a lifelong Jil Sander devotee. 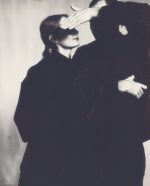 They couldn’t have had more different upbringings. Luke, born in 1975, grew up a skater in Vancouver born to a private investor father and an art therapist mother, who had traveled the world together. “We had little means when I was very young growing up, but my parents found their way on the West Coast of Canada. There’s this entrepreneurial, give-everything-a-try mentality. My dad is self-taught. Totally fearless,” Luke says. He describes his mother as extremely liberal and constantly supportive. “She would teach kids ways of dealing with illness through art and she would always be trying to impart some knowledge about Goethe, Rudolph Steiner, or Robert Frost. She’d always write me notes to get out of school, so I could go play video games or skate or something. She didn’t trust the school system at all.” In contrast, Lucie, born in 1982, grew up with a view of the Matterhorn in the Swiss mountain bubble of Zermatt with parents who still run a restaurant in the upscale ski resort. “I didn’t have all the influence Luke had, but my mother was a big Jil Sander fan, which was my link to this world. She was really passionate about the brand, the way she dressed and the effect clothes had on her,” she recalls. The enthralment it spawned with designers like Rei Kawakubo and Yohji Yamamoto brought Lucie to the Polimoda fashion school in Florence, where she met Luke in a house share.

They were both old souls, fascinated with the whys and hows of the business, with technique and fabrication, and what perfects a garment. “I’m really obsessive-compulsive. I’m really perfectionist,” Luke admits. “I became interested in design through more of a sociological idea of being interested in why—growing up skating and listening to certain kinds of music—this logo of one skate brand was really cool and why another one didn’t matter. Why a 10-year-old kid would think one is cool and the other’s not. That’s what got me into design in the beginning.” He went to work for Supreme in New York, while Lucie took a job with Nylon magazine followed by a stint with Narciso Rodriguez. But it was her time working under Marc Jacobs at Louis Vuitton in Paris that taught her the business. “It was incredible. Very intense. He’d come in and we’d basically have 10 days,” she says, referring to Jacobs’s infamous last-minute way of working. “He was very nice. It was my first experience so it influenced me so much.” When she moved on to Nicolas Ghesquière at Balenciaga, some acclimation was needed.

“You have to be very flexible and be able to react and find a solution. That’s what makes the company so powerful in terms of making things.”

“Suddenly it was, ‘You have six months to do this,’” she says, smiling. “It was special to see the archives and get to know them.” Meanwhile, in New York, Luke was experiencing the coveted cult of Supreme from the inside. “There was an article in Vogue in 1996 that compared Chanel and Supreme, and they really got the fact that the customer’s behavior was exactly the same,” he says, explaining the streetwear phenomenon. “The process isn’t different. James Jebbia’s process is as detailed and particular and refined as any person I’ve ever met. Every little thing was under a microscope: every detail, every color. Now I feel like people look at t-shirts and think it’s some kind of hype—that they sell 3,000 of them online in an hour and a half—and that’s overshadowed a lot of the original people, who worked in that world.” He lists Michael Kopelman of The Hideout, Fraser Cooke of Nike, and Shawn Stüssy himself. “They’re cultured, tasteful guys with a deep understanding of music, art, and culture.  More than most people I’ve met in other creative fields.”

You could say the same about the haute couture world Lucie entered at Christian Dior, where she co-headed five collections with Serge Ruffieux—now at Carven—following the departure of Raf Simons. “I really liked Dior. The archive is beautiful. But I have a more personal relationship to Jil Sander. I can identify more.” In the Meiers’ debut collection for Jil Sander, Lucie’s experience in the haute couture ateliers was expressed in a somewhat hand-spun vibe and sleek tailoring.

Suits were flattened, their sleeves sculpted around the body. The sensibility was echoed in macramé pieces and cobweb knits, or a pleated black leather slip with a lace hem. “I look at some of the men’s pieces in a very personal way, and I think Lucie looks at the women’s pieces in the same way,” Luke explained back then. “Do you want to wear it? It’s that simple.” It’s an essentially human sentiment, which manifests itself across the fashion board, from streetwear to haute couture. Two opposites, which have unexpected similarities in the new fashion world in which we now find ourselves, obsessed with anything one-of-a-kind or limited edition.

Much as they don’t want the cliché hanging over their heads, the Meiers represent the best of both worlds. You could say their hiring is the product of all the gentrification of cult and elite fashion brands that’s happened since the dawn of social media. Cases in point: the rise of Vetements, Off-White, and Yeezy, who all appropriate codes from Martin Margiela and Helmut Lang. “There’s been a change in the way people view these kind of brands,” Luke says. “Before, people were interested in them because they were saying something directly to a certain person, who would really identify with that. And they would see other people walking around with it and know that this person liked that also. They had this certain commonality. You recognized that someone else had those four stitches,” he says, referring to Margiela’s trademark. “The Supreme box logo t-shirt in the 1990s in New York, you had to know what it was. It wasn’t a famous logo. But now, it’s different because people want to wear these things because everybody knows what they are. And that to me is a huge reversal. These things used to be a very niche thing.”

Trusted with the Jil Sander legacy, the Meiers’ challenge is to appropriate the founder’s codes in a way that hits the balance between popularity and integrity. “No matter where you go it’s not an easy thing to do, but in Italy there’s always a very positive first reaction,” Luke says. “‘The culture is very creative because it’s like going to a train station and catching the same train every day, but it’s always a different track and a different time. You have to be very flexible and be able to react and find a solution. That’s what makes the company so powerful in terms of making things: every piece is slightly different, the finishing, the detailing, the construction. It’s always a new set of challenges to make something very high level at the end.” Based between Milan and Paris, the Meiers haven’t had much time to spare since their arrival at the house, but they have escape routes via surfing, snow sports or gallery visits whenever they’re in a big city. “I don’t think we feel forced into anything,” Luke says, reflecting on their work commitments. “We’re quite obsessive about what we do. It’s our own masochistic side, and we care about it very much. Clothes can really make people aware of how you feel about things. It’s our medium to say something.” 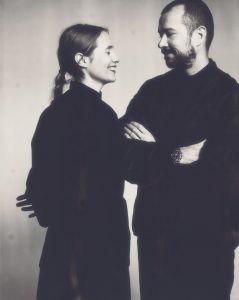