Document speaks with the four members of The Litas, featured in a Bulgari-produced documentary premiering this week at the Tribeca Film Festival.

Making its premiere at New York’s Tribeca Film Festival this week is a new short documentary on four Italian women who’ve traded the comfort of automobiles for the autonomy of two wheels out on the roads of Rome. The Litas, directed by award-winning filmmaker Nina Meredith for Bulgari, tells the story of the newly-founded Rome branch of The Litas, a global community of women motorcycle riders. It’s a surprising and often touching depiction of women in Italy today that follows Francesca Cuccovillo, the leader of Litas as she narrates the stories of how her fellow riders found freedom on the roads. Document spoke with the 34-year-old rider, along with the three stars of the film, Martina Lorenzini, Claudia Aquilanti, Valentina Vincenzi, at Bulgari’s showroom in central Rome. In the last year, the foursome have seen their small group grow to eight members who regularly participate in weekend rides and summer rallies across Italy. Cuccovillo founded this branch of the Litas after turns riding in “mixed” motorcycle clubs—typically male dominated groups, where, as she says, judgement perpetually trails female riders. “‘You ride well for a woman’ is one constant value judgement you’d hear,” she said. “I was so over that attitude. I wanted to be totally at ease and also share my experience with other women.”

Document—What is a normal week or month for the Litas?

Francesca—There is no normal week. One of the great things about the group is that compared to other clubs we do not require any membership fee, so it’s completely open, and we accept any bike.

Claudia—Yes, we have Harley Davidson, Triumph, Ducati, and no competition between them. It’s more about curiosity, fascination in other brands. It’s also a journey into the technical side of motorbiking. We like to experiment.

Francesca—There are different ways of riding, different sensations and experiences from different bikes so this is another fantastic thing about our club. 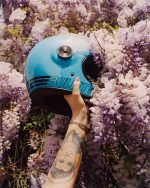 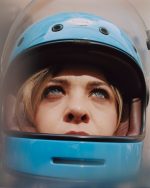 Claudia—The only thing that unites us is being women and having two wheels. Two tits, two wheels! [Laughs]

Document—Are there obstacles, in terms of perception, when you go out on the road?

Francesca—When we are together, no. Perhaps when you are on your own you might get the odd annoyance. I would like to see the guy who gives us trouble when there’s ten of us all on our bikes. It wouldn’t be a very clever move! [LAUGHS]

Martina—Above all we get positive reactions, like the smiles we get from little girls or boys who see us go past. They are surprised and intrigued rather than anything else.

Document—What are your personal connections with motorbiking?

Claudia—I was a professional athlete as girl and had to treat my body very carefully, I wasn’t even allowed to go on a moped. Then I went to work in the military and suddenly I felt this urge to get on a motorbike, to do everything that I couldn’t do before. I first bought a Ducati Scrambler 400cc, and had that for 5 months. The girls laugh that I’m always changing my bike. I’m just like that, I like to try new things out. I would say I’ve got a wild side, I’m quite a free spirit.

Valentina—I bought my first motorbike in 2016, Francesca helped me a lot. I showed up on Francesca’s Triumph to see the bike for sale and asked if I could have a day to think about it. Meanwhile another potential buyer turned up on a clapped out scooter, but he had a cheque and offered to pay straight away. Anyway, I called the seller and he was very happy to give it to me instead of the other guy —obviously Francesca’s Triumph entrance helped a lot! 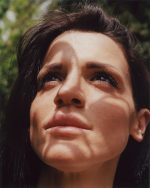 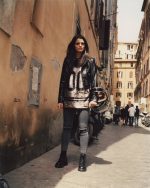 Martina—My father runs a Harley Davidson dealership in the south of Rome, so I grew up surrounded by bikes. As soon as I got a driving license, I wanted to get a bike of my own. Two days before the summer holidays I received an envelope, inside there was the bike’s manual and documents with my name on them. I burst into tears and there at the shop was my bike parked outside.  It was really the most beautiful moment of my life—I was surrounded by all the important people to me, my colleagues, my boyfriend, and my Dad. [Wipes tears from eyes] It was almost like the birth of a child.

Document—Is a common misconception in the world of motorbiking the perceived physical limitations of being a woman?

Francesca—It is true to a certain degree. Riding a motorcycle is a physical experience, it’s not driving a car. You have to use your body to control the machine so if there is more of you, if you are taller it can be easier. But the important thing is having a good relationship with your body, of knowing your body. The point is that if the bike falls over and it weighs 250kg [550lbs], I’m not going to be able to pick it up. You aren’t either. Just because you are a man doesn’t mean you are going to be able to pick it up. So, it’s about having enough confidence with yourself and believing you can do it. I mean look at me: I’m five feet tall. I grew up having society telling me that you cannot ride, you are not tall enough, and for many other reasons too: because you are a woman that’s not what women do. I always wanted to buy a motorbike, but in fact when I finally bought one everyone was surprised, because it had been a secret passion.

Claudia—It’s a question of practice. Practical experience so you feel safer and more confident.

Martina—For me it’s about the attitude of the people that surround you. They can give you confidence, they can push you on and support you. At first, I have to admit that I thought “Goodness, how am I going to do it?” But, I knew that I loved it. I convinced myself that I could do it and the people around me made me believe in myself.

Valentina—There is a physical element that you can’t ignore. I think if I were taller I could ride any bike I wanted. So, it’s true that the average man has much more choice of bike in the first place. The problems isn’t really about riding the bike, once you’re on one you just go. It’s the stopping, the mounting, the maneuvers to park and so on that can be difficult on certain models if you are a smaller person. No doubt about that.

Francesca—But it all depends on the person and the model of bike. I have a Triumph, which isn’t small, and I’ve found my own way to ride it. I’ve learned to pay more attention to those more difficult maneuvers being a shorter person. I am completely independent on my bike. You have to be. You can do anything if you really want to, you just have to believe in yourself, you have to have determination. It’s more of a mental block than a physical one.

Document—Beyond wanting to be in a club and ride your motorbike do you feel you are fighting for a cause? Are you thinking about the role of women today in Italy, about feminism?

Claudia—Rather than fight, I would say we want to demonstrate, to show everyone what women can do, especially to other women. I see more of a closed attitude from other women. Many men are starting to realize what is going on, but I think too many women are keeping silent. Sometimes it’s the women, even, who criticize us. You see this everyday, if you do something that these women think you should not be doing they attack you because you are showing that you have gone far and beyond what she is capable of.

Document—Was this kind of prejudice further motivation to join The Litas?

Claudia—For me, everything is a challenge and a way to test myself. When I become a mother with twins, I bought myself a motorbike. This was looked upon very badly by my family. When my kids where three years old, I felt I had passed the motherhood challenge, so I wanted the next one. My family thought I was too much, that I was crazy and irresponsible. But this attitude made me want to show them all the more that at any point of your life you can do things, even if before you were unable to for whatever reason, now you can.

Martina—For me, it’s not about the role of women or the role of men. When you are doing something that you like and that brings you joy, you’ve already won. For me, doing this because it’s what I want to be doing is the greatest feeling. I really believe that if you are not living your life as you want to there’s no point. I know sometimes a woman biker can feel embarrassed or like everybody’s staring at the traffic lights for instance, and they’re afraid that they’ll make a false start or stumble. I have to say that I just don’t care about stuff like that. My tank is decorated with rhinestones, so as far as I’m concerned, I’m the winner here.

The Litas photographed by Steph Wilson in Rome. 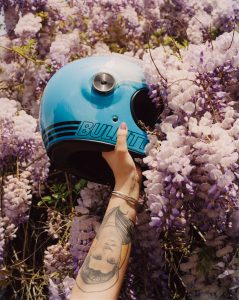 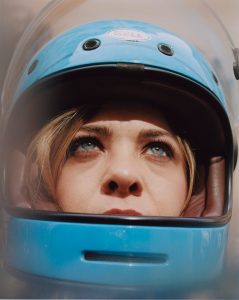 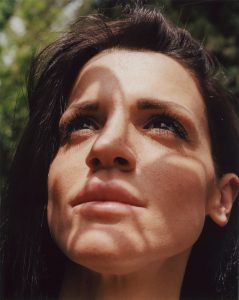 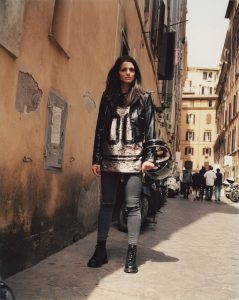 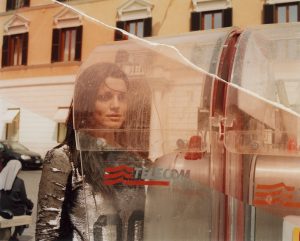 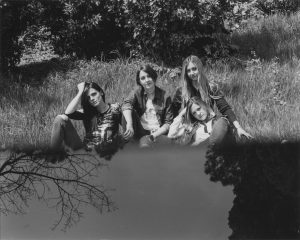