Crumpling, wearing, and ripping up paper in her performances over the last 50 years, Joan Jonas rarely obeys the page. Forged in the realms of performance, Jonas’s experimental drawing practice most often exceeds the intimate scale of the portfolio seen here for the first time, culled from her personal notebooks of the early 1970s. Though Jonas studied drawing and poetry in addition to sculpture, when she began to make performances at the turn of the 1970s, she forwent the rectangular ground of the page for city blocks, blackboards, and film and video screens, tracing enigmatic designs across these diverse fields of cultural activity. In Delay Delay, an outdoor performance that took place in downtown Manhattan in 1972, for instance, spectators watched from a rooftop as a group of people (and at least one dog) made what one performer called a “moving drawing” by wielding lengths of pipe, a metal hoop, mirrors, wooden triangles, and bamboo poles across a grid of vacant lots in the distance. (“Poles by Friday,” Jonas noted beside diagrams of circles and lines: shapes walked by performers.) Offering clues to the formation and unfolding of some of Jonas’s earliest pieces, the drawings and notations published here also illuminate a long standing tension between movement and inscription that continues to inform her multimedia performances.

The twisting designs that Jonas dubbed “endless drawings”—lines that wrap continuously around themselves or weave through a grid—crystallize this bind between motion and transcription. Jonas encountered these drawings in an anthropological text devoted to the labyrinthine motifs found on the Melanesian island of Malekula. The drawings are attributed to a “Female Devouring Ghost” perched on the shore between life and death: in order to cross over to the other side, a departed spirit must complete the ghost’s template without lifting their finger from the sand. Engaging these drawings as rituals of continuous movement, Jonas traced and erased the “endless drawings” on chalkboards in her performances. Another sinuous design found in the portfolio also served as choreographic blueprint. Curving in long arcs knotted with sharp turns, the line plotted through a grid of dots was inspired by the paths of Noh performers diagrammed in a pamphlet Jonas brought back from Japan in 1970.

Among Jonas’s notations related to her performances are drawings of an assortment of creatures, with a particular attention to birds. These are motion studies: flapping, gliding, and running, the birds challenge the project of transcription (except when deceased). In light of Jonas’s recent work that addresses the devastating impact of climate change on bees and ocean life, the impulse to capture avian locomotion takes on a different meaning. As Rachel Carson warned in her 1962 book Silent Spring, birds become the harbingers of environmental disaster through their disappearance. Relatedly, Jonas’s unconventional drawing repertoire now includes moving ice within puddles of ink. This is a technique freighted with an ecological urgency: a transcription of melt. 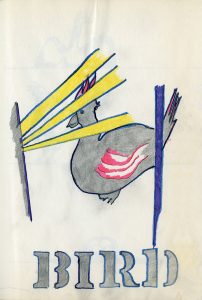 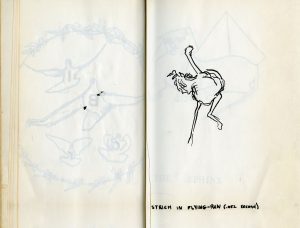 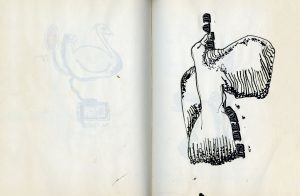 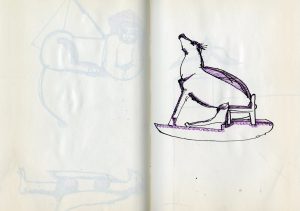 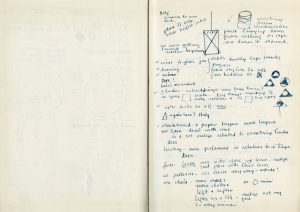 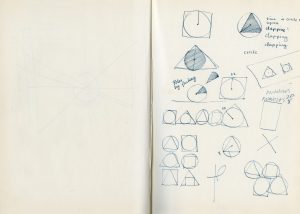 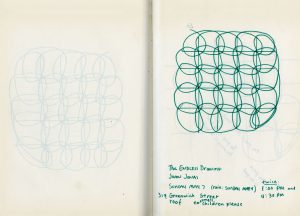 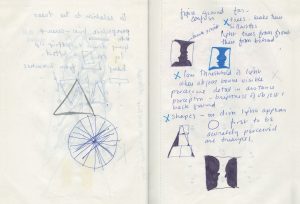 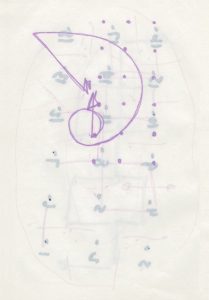