The Met's 2018 Costume Institute exhibition, “Heavenly Bodies: Fashion and the Catholic Imagination,” explores the relationship between fashion and Catholicism.

A parade of halos, jeweled crosses, and Papal tiaras marched down a red carpet in New York on May 7th. It wasn’t a Catholic procession for the Pope, but the night of the Met Gala, one of the most buzzed-about red carpets in the world. The annual fundraiser coincides with The Costume Institute 2018 exhibition at The Metropolitan Museum of Art, titled “Heavenly Bodies: Fashion and the Catholic Imagination,” which runs from May 10 to October 8. As the title implies, it explores the relationship between fashion and Catholicism, which leads to the question: Is the use of religious references in fashion sacrilegious?

At a press preview in the Temple of Dendur, Cardinal Dolan, Archbishop of New York, gave “Heavenly Bodies” the blessing of the Catholic Church. “Think about it just for a moment,” said the archbishop on the Church’s role in the exhibition . “It’s because the church and the Catholic imagination, the theme of this exhibit, are all about three things: Truth, goodness and beauty. That’s why we have great schools and universities—to teach the truth. That’s why we love and serve the poor, to do good, and that’s why we’re into things such as art, poetry, music, liturgy—and yes, even fashion—to thank god for the gift of beauty.”

There’s no doubt that the objects associated with Catholicism are beautiful. Fine jewels adorn crosses, delicate gold embroidery decorates papal vestments, the traditional dress worn by popes, and colorful stained glass windows surround many churches. In a 2002 address, Pope Benedict XVI even wrote in his 2002 address “The Feeling of Things, the Contemplation of Beauty” that “being struck and overcome by the beauty of Christ is more real, more profound knowledge than mere rational deduction.” One walk through the Anna Wintour Costume Center—where 40 ecclesiastical masterworks from the Sistine Chapel sacristy, many of which have never left the Vatican, are on display—makes it obvious why fashion designers would be so captivated by the Catholic imagination. A 1918 white silk cope of Benedict XV is delicately embroidered with gold metal thread, gold tinsel, and gold sequins. In the next room, the gold pectoral cross of Paul VI, who reigned from 1963 to 78, is decorated with emeralds, sapphires and pearls. Nearby, the opulent jeweled tiara of Pius IX, who was Pope from 1846 to 1878, is covered with diamonds, rubies, sapphires, emeralds and pearls. 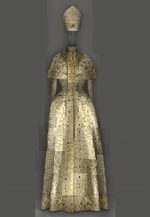 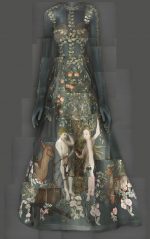 Exhibition curator Andrew Bolton and his team made a point to juxtapose the contemporary garments in the exhibition against actual religious iconography in the Medieval and Byzantine Art wing of The Met, and farther uptown in The Met Cloisters. At The Met Fifth Avenue, a row of designs by Thom Browne, Cimone, Dolce & Gabbana and Moschino show the pervading influence of the Habit, the religious dress worn by nuns. “There is something innately appealing about the blasphemous concept of religious garments being seen as sexy—very  much the opposite of their intended purpose,” said designer Carli Pearson in the ensemble’s caption. “In my work, I love to play with the notions of power and the provocative nature of the untouchable.”

Uptown at The Met Cloisters, a religious museum housed in four cloisters that use elements of French monasteries, one can see the dialogue The Met executed between the fashion and the religion. A caped black ensemble from Valentino’s Autumn / Winter 2015 collection stands high above in a courtyard. A Jean-Paul Gaultier couture dress from Spring / Summer 2007 is covered with an image of the Virgin and child painted by Jean Fouquet stands before a stained glass window from Germany depicting The Adoration of the Magi and the Annunciation. Farther along, an austere white wedding dress from Spanish designer Cristobal Balenciaga’s Spring 1967 section stands at the circa 1175 Fuentidueña Apse, a semi-circular termination where the altar is located found in Byzantine, Romanesque of Gothic Christian church architecture that was originally part of the San Martín Church in Spain, a tasteful reference of religion in fashion.

“But, it is fashion and The Costume Institute, after all, and isn’t it their job to provoke?”

Bolton pointed out to Document that the majority of the designers in the exhibition, including Balenciaga, were Catholic, negating the idea that they were inappropriately stealing from the religion. “I spoke to the designers and the majority grew up Catholic,” he said. “They gravitated towards this imagery after nostalgia more than anything else.” But when is it okay to reference religion and when is it inappropriate? “It’s the role of imagination, and I think sometimes I get a little disheartened about arguments about appropriation,” explained Bolton.

While some pieces, like Rick Owens’s  subversive interpretation of a habit (it comes with a “pee(p)” hole at the crotch) and Gianni Versace’s sexy sequined evening tops adorned with images of the Virgin Mary are clearly provocative, the majority of the exhibition featured tasteful catholic references—perhaps best represented in Rodarte’s angelic evening dresses that referenced the silhouettes and candy-hued palette of Fra Angelico’s frescoes at the Convent of San Marco. The Catholic Church has the exhibition’s approval, leaving the question of appropriateness in the hands of the beholder. While the majority of designers are indeed Catholic and referenced the religion in a respectful and tasteful way by using its minimal lines and imagery, a few of the pieces were provocative and sacrilegious, sexualizing the normally modest dress expected of the religion. But, it is fashion and The Costume Institute, after all, and isn’t it their job to provoke? 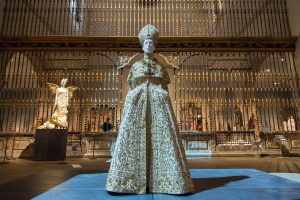 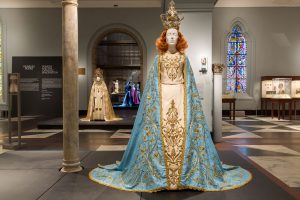 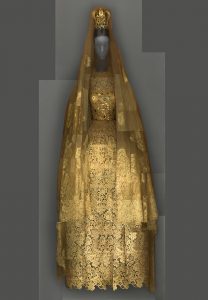 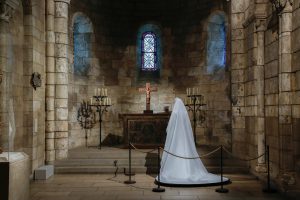 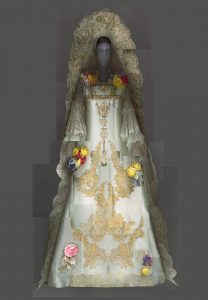 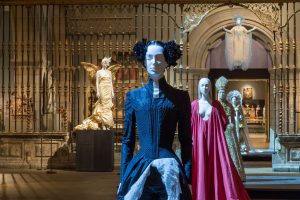 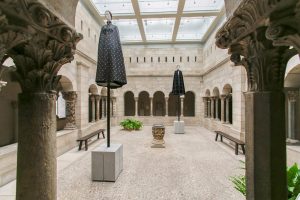 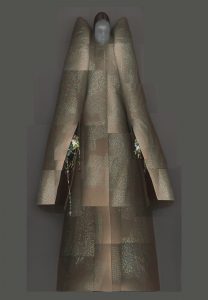 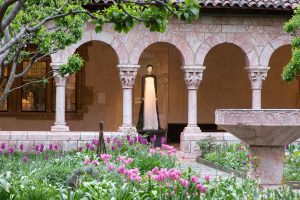 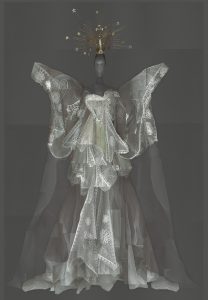 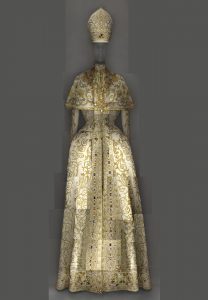 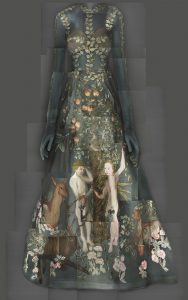 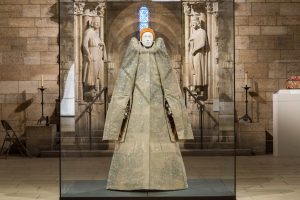 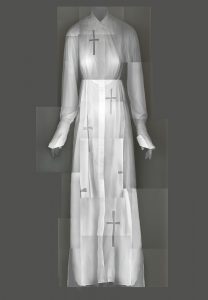