This past weekend, Frieze New York’s first curated section celebrated the legendary curator Hudson, whose lone vision shaped the contemporary art world as we know it.

When Frieze invited Matthew Higgs, the director and chief curator of White Columns to propose an idea for Frieze New York’s first curated section, he knew immediately what he wanted to do. “My only thought was to do a section about Hudson,” said Higgs of the legendary art dealer who was simply and singularly known as “Hudson.” Hudson’s gallery, Feature Inc., was a requisite stop for Higgs when he first started making forays into New York City in the early 90s. “He followed his own logic, his own intuition, he had the most extraordinary, visionary sense of what was important, even if people didn’t get it at the time,” said Higgs. Feature Inc.’s legend easily travelled across the pond. “I would read about Feature in the art press, I was captivated even at a distance.”

Frieze embraced the idea for the 2018 art fair opened “For Your Infotainment,” a section comprised of eight booths that will run at Frieze New York through May 5. It highlights the work of major artists who either had their gallery debuts at Feature Inc., or long-standing relationships with Hudson and the space. It’s a fitting tribute for the art-world legend who passed away from AIDS-related complications in 2014 at the age of 63. Gagosian displayed a booth of Sailor Moon-esque sculptures juxtaposed against abstract canvas by Takashi Murakami, who first showed in the United States with Hudson. David Zwirner presented a selection of illustrations by Raymond Pettibon. (“When Hudson started showing him, he was still associated with west coast punk subculture,” commented Higgs.) David Kordansky Gallery showed a series of homoerotic graphite-on-paper sketches by the late Tom of Finland—another artist who Hudson championed early on. Feature Hudson Foundation, the foundation dedicated to preserving Hudson’s legacy, showed a selection of 14 artists—Richard Kern, Lisa Beck, Dave Shaw, and Judy Linn are among them—curated by Higgs. “Hudson is the art dealer’s art dealer,” said Higgs, “because in a way every art dealer respected him and understood he had this extraordinary eye.”

There are art dealers who prioritize sales and money, and there are dealers who champion artists and their art. Hudson is considered to be apart of the latter. A former dancer and performance artist who only went by his last name, Hudson would eventually become one of New York’s most influential art dealers. In 1984 he opened his gallery Feature Inc. in Chicago with a show of consisting of “re-photographs” by a then little-known artist named Richard Prince. Prince would go on to become, well, the Richard Prince, currently represented by Gagosian, one of the biggest blue-chip galleries in the world. This trend would replicate itself numerous times over the course of Hudson’s 30-year stint as an art dealer—he would take a risk on an unknown artist, who eventually would blow up resulting in the attention of top-tier galleries. Four years after Future Inc.’s opening, Hudson set up shop in New York City, opening spaces in SoHo, Chelsea, and, finally, the Lower East Side.

“What was amazing for the entire life of his gallery, he was sat behind the front desk,” remembered Higgs. “So when you go to Gagosian, Larry Gagosian is not sat there anymore. When you go to David Zwirner, David Zwirner is not there anymore, but Hudson was always there as this sort of conduit for the art, and the artists, and the public, and he was very passionate about sharing his enthusiasms, and I think the reason for doing this is to celebrate Hudson, and for me it’s important that we don’t forget him.”

Ironically, Hudson didn’t believe in art fairs until later in his career and never showed at Frieze. “He would sit at the Armory and read a book and not talk to anyone,” recalled David Shaw, another artist championed by Hudson. “If someone asked him something he would.” It wasn’t until he first showed at the Dallas Art Fair around 2012 that he changed his mind. “When he came back, he was like, ‘I loved it,’” recalled Shaw, “Later in his life he started to do some art fairs, and he really enjoyed it,” said Higgs. “He enjoyed meeting people, he enjoyed all the random nature of his audience, and for him it was just a big stage to share his enthusiasm. So I think in a small sense, he regretted not doing them sooner.” 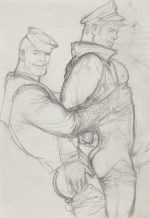 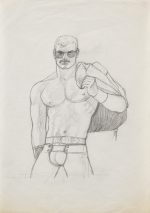 Hudson also started to feel the pinch that is now commonplace amongst small and mid-size galleries about a decade ago. “Even in that he was ahead of the curve, because he was struggling 10 years ago,” said Higgs. “He had a great eye, he showed great artists, and some of those artists left to go to bigger galleries, but he created economies for those artists.” Hudson showed no bitterness as his artists left for bigger blue-chip galleries. “He was very relaxed about it, and he always said, ‘People move on,’ and that’s it,” recalled Jimi Dams, who served as a director at Feature Inc. from 1997 to 2005 and now acts as chairman of Feature Hudson Foundation. “The only thing he wanted to do was show art that he thought needed to be seen. Whether it made money or not, that was of no importance.”

In the Feature Hudson Foundation booth hangs a sculpture by Shaw made from a piece of broken plywood that snapped when he wedged it into his 30-ton studio elevator in Sunset Park, Brooklyn and pressed up. What viewers don’t know by looking at it is that it stemmed from a conversation that the artist, Shaw, had with Hudson about “the destruction of self in relationship to the creation of identity,” Shaw tells me. Hudson was the first gallerist to give Shaw an opportunity to exhibit in a gallery in 1989. “He made my career,” said the artist. A decade later, Shaw finally got his first solo show with Hudson (where the plywood sculpture first appeared) titled “Inuverse.” “He gave full license to the artist,” said Shaw. “He wouldn’t interfere unless you asked him a question.”

And what sort of lessons did Higgs, Dams and Shaw learn from Hudson? “He told me about self-determination, independence, sticking to your guns, supporting the things you believe in, never change course, and that eventually you’ll be proved right,” said Higgs.

Said Dams,“People need to be reminded there is a better way.”

“He taught me you can make your own way,” replied Shaw. “That’s we he taught me, and that’s what he did. He didn’t buy the bullshit.” 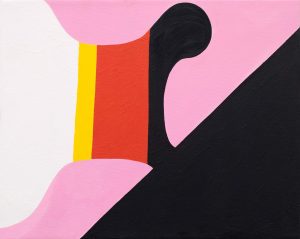 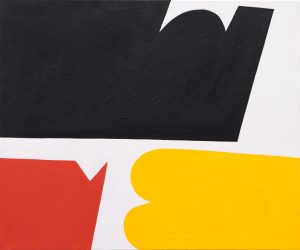 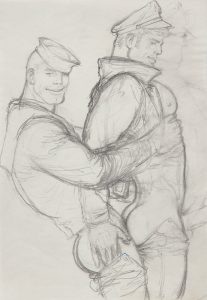 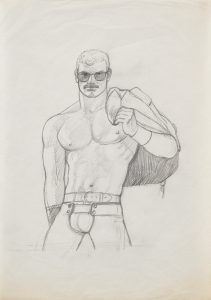