Filmmakers Ian Bonhôte and Peter Ettedgui refused to whitewash the tumult and glory of the late designer's life in their documentary co-effort. It premiered, this past week, at the Tribeca Film Festival.

This past Sunday at New York’s Tribeca Film Festival, one of the most praised and enigmatic designers in fashion history received the documentary treatment his legacy has long deserved. McQueen by filmmakers Ian Bonhôte and Peter Ettedgui, takes on the life and work of Alexander McQueen. The pair were faced with a rather monumental task of summing up the enigmatic life of the British designer, who took his life in 2010 after a protracted struggle with anxiety and depression. McQueen’s masterful provocations and seething rebukes to consumerism, global warming, and even fashion, itself, has spurred endless debate and fascination about his persona. The project marks the first collaboration for the duo. Ettedgui, who co-wrote 2015’s Listen to Me Marlon, a documentary film on yet another revolutionary figure, Marlon Brando, sought out Bonhôte when he discovered the commercial filmmaker was attached to a project on the designer’s life. Despite either lacking formal experience in fashion, McQueen’s creative influence permeated the London of Bonhôte’s formative days allowing for a natural kinship with the designer’s work. The pair spoke with Document following their Tribeca premiere. Only briefly did they considering making the project a narrative drama they told us. “Sometimes,” said Bonhôte, “you just can’t top reality.”

Document—How did you settle upon Alexander McQueen as a documentary subject?

Peter Ettedgui—I had just made a movie about Marlon Brando called Listen To Me, which was one of the most extraordinary professional experiences I have ever had. I hadn’t worked on many feature documentaries at that point—only on one other—and I found it extraordinary the way you could tell a story without the old tricks of documentary narration, but instead make it seem as though the subject was talking to the audience and sharing his own life. It was a very emotional way of sharing a story. So when someone said to me that there was going to be a drama about Alexander McQueen’s life, I thought, “That’s a waste of space, let’s do a documentary!” Very shortly after that, I heard that Ian was attached to direct a documentary about McQueen. We knew each other a little bit, and I sought him out and said: “I’d like to work on this with you if you feel you need to have a writer or storytelling partner.” I thought it was such an extraordinary story, he’s a once in a lifetime unique, creative genius who could’ve been a filmmaker, a painter or a sculptor, but his medium was fashion. The highs and lows were quite compelling.

Ian Bonhôte—On my side, someone came out of a meeting and said, “Ian would be a good person to direct that film,” even though I had never done documentaries before but had done some fashion films, and, as a director, I had a bit of a reputation for beautiful imagery and conceptual visuals. I’m a 40-year-old man who came to London in the mid to late ’90s, so Lee’s influence was everywhere, and within six months of me arriving in London he had taken over Givenchy. Everyone talked about Lee [Alexander McQueen], and everyone talked about Lee in an unaccessible way. All the collaborations he did within the music industry, with the art world, all of that was constant. He was everywhere. One thing that sometimes worried me about documentaries as a filmmaker is that I need to be pushing the bill visually. I love stories and I love the emotional aspect, but I am always worried that with documentaries and traditional interviews, “How can you thrill them visually?” But with Lee, even if we didn’t create anything, his shows and his work were just exhilarating. Sometimes you can’t top up reality.

Document—His shows were so autobiographical that is seems like such a natural narrative for the sequence of the movie, how deep into your planning did you realize this?

Peter—Ian and I talked about it. We were aware that McQueen had a dark side and that side had been turned into some quite sensationalistic tabloid articles and books that went into every detail of his private life and it creates this idea where you think: That is McQueen. We didn’t want to make that film. We didn’t want to make something that was sensationalistic, that was voyeuristic. We didn’t want to whitewash him, but we really didn’t want to go down that road. So what we thought immediately is what he always said: “My work is my life. Look at my shows, that’s my autobiography.” We thought we’ll take him for his word and we found the shows that were the most autobiographical and used those as anchors to express very particular things about the bigger themes and the bigger narrative moments in his life. It was such a strong instinct for us both and once we’d done that—having that idea and getting it down—that was the easiest part of the film. The hard part was then making it stand up as a film and making it be authentic and properly documented, in the sense that having the right archive and the right cast of contributors bring it to life. 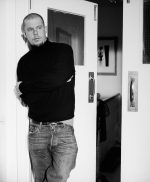 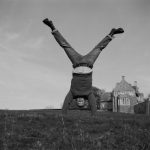 Document—What I thought was so endearing during the film was throughout the interviews with his entourage, I repeatedly heard “I rang his mother” as how they initially approached him. He was this fashion trailblazer but if they wanted to speak with him they still had to go through his mother.

Ian—Yeah, he’s an East End boy, where the family unit is very strong. Obviously throughout his life he had moments where he went his own way, but the contributors that touched me the most is his family. I think the formative years is just an extension, we mature, we grow up, but you can’t reinvent yourselves. His family knew him very well, and that was really touching. His relationship with Joyce, his mother, was very strong. We didn’t want to make a fashion film. We wanted to make a film about an extraordinary man who works in fashion. Family for me is something that you can walk away from, but you are who you are, and we end up being a bit like our parents anyways.

Peter—Going back to Joyce herself, she was incredibly important in his life and I hope that comes across in the film. She really fed his imagination, his sense of fantasy, through her own historical research and her own interest in storytelling. All of the people we interviewed, who knew him when he was coming out of Central Saint Martins and was starting to launch himself, all said, “You can’t imagine how important Joyce was.”

Document—Some of the topics that Lee based his show on were extremely volatile, specifically ‘The Highland Rape’ collection, where women were meandering down the runway with the allusion of shredded garments as if they had just come off a crime scene. Were you weary of showing some of these more politically incorrect moments of his life?

Ian—No. You had to. It would have been garbage if we had whitewashed that.

Peter—And he would not have wanted it. We had to do something that respected who he was and part of that was saying “Okay, if he did it then we have to show it.”

Ian—‘The Highland Rape’ collection is so relevant right now. Look at what just happened in New York and how the film industry has been shaken, Lee was talking about it 25-30 years ago. It has always been there. Women have dealt with so many inequalities and abuses, and Lee was someone who actually put women at the centre. He said he dressed women and he created clothes for women, for themselves to buy. Not for their husbands to buy, or for them to look pretty.

“With Lee, even if we didn’t create anything, his shows and his work were just exhilarating. Sometimes you can’t top up reality.”

Peter—That probably was his most autobiographical collection, in that he was really feeding off of these inspirations that his mother had given him. Feeding off of the things that he was processing that he had experienced growing up and witnessing with Janet, his older sister, being abused. He was weaving all that through the show and there was this provocation that is all there. I think that was almost the first show where we thought that it had to be a chapter in the film.

Document—What is the most common misconception people have about Lee?

Ian—I think notion of him being a misogynist. We found out that he had a really strong love for women, between his mother, his sister and his close friend Annabelle Neilson. Because he reached such an amazing level in terms of his career, I think we have to be careful not to make him a myth. He was still a man that had his ups and downs and had his sufferings. We just have to be reminded that there is a man behind the theatrics, how had to deal with the toll of work, or him not getting married or not having children. Like Mira Chai Hyde said, she wished he’d have that love in his life to be able to carry on, and I think there are certain things that are missed in his life that could’ve helped him solidify.

Document—How would you describe his life in three words?

Ian—Raucous. Simon Costin used that word. He would be extremely funny and would play pranks on people. Passion. Literally everything he did, he did it to the maximum. Punk? I think he had a punkness and I think that’s very much London.

View slideshow above to see stills from ‘McQueen’ in theaters this summer. 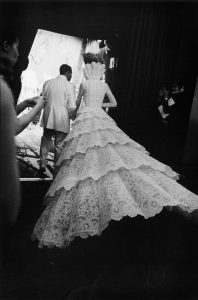 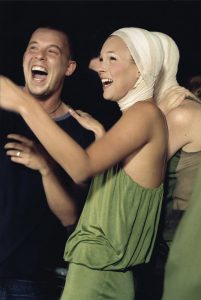 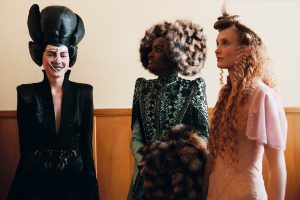 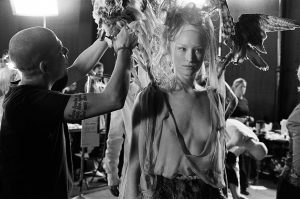 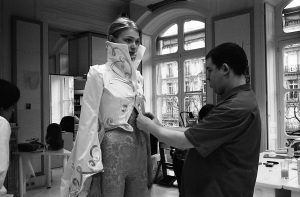 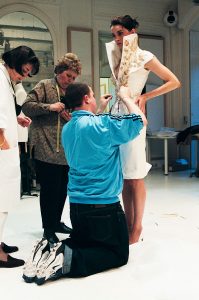 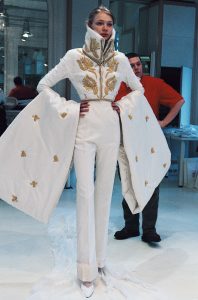 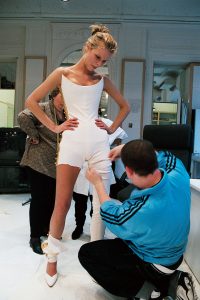 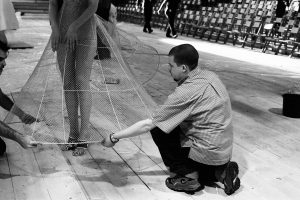 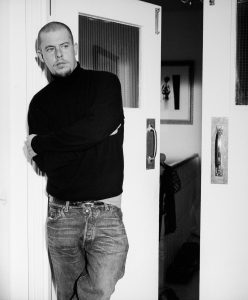 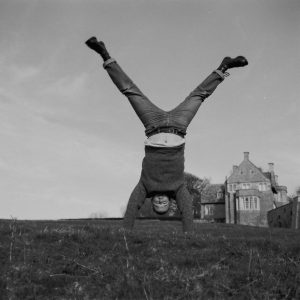 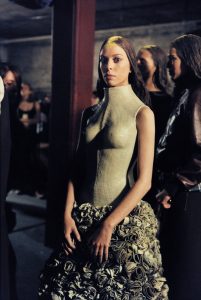 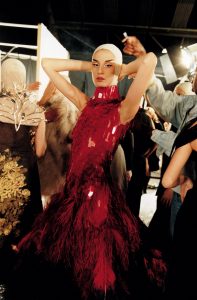 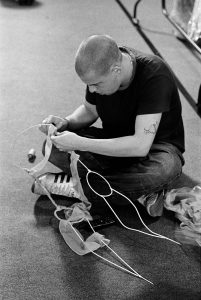 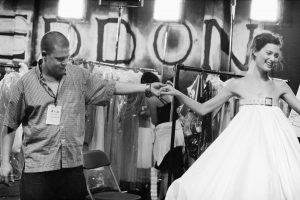 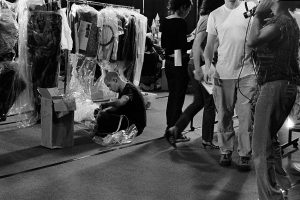