A new exhibit at MoMA's PS1 takes a nuanced look at how women convey power, desirability, and rebellion through garments worn and objects wielded.

In a present-day climate at once toxically misogynistic, as seen through the on-going announcements of the #MeToo moment, yet increasingly unwed to classic conceptions of gender roles, the meaning of femininity has fractured into multiples, leaving us with a destabilized, empowered, and newly limitless term to re-define. It’s here, in the midst of these clashing cultural forces, that a woman’s appearance, down to the performance of womanhood itself, has become a site for conversations about agency, sexuality, and violation.

These parallel dialogues are taken up in a new show at MoMA’s PS1 that confronts the historical and contemporary resonance of bodily ornamentation; how female-identified people convey power, desirability, and rebellion through garments worn, objects wielded, and identity performance. Body Armor, which opened this past weekend, is built around four female artists working across several mediums—painting, metal work, photography, and textile. Their work explores the possibilities opened by adorning, or arming, oneself in tattoos and jewelry. Unspoken, but running underneath each work is a critique of the daily contortions women must perform in order to move through male-dominated spaces while simultaneously celebrating women’s ability to overcome by laying claim to physical and artistic space.

The exhibition opens with Delilah Montoya’s photographic portraits of female boxers along the border of New Mexico and Colorado. An artist with ancestral ties to the region, Montoya uses her lens to gather the cultural convergences at work in the Southwest. In their professional lives, these athletes are caged into reductive categorizations, marketed as a “foxy” or a “butch,” but in Montoya’s photographs, they embrace full and fluid identities: flexing their biceps, holding their children, wearing lacy lingerie as they weigh-in before a fight. “When people look at these images, they probably see something like ‘feminine strength,’” says curator Jocelyn Miller. “That’s certainly there, but when you start to learn more about what this artist was interested in documenting, you realize it’s a much more humane, nuanced consideration of what our identities mean, all the veils we put on and take off to navigate our world.”

Violence and feminine expression are explored on the same plane in a series of paintings by Maryam Hoseini, an Iranian-born painter examining transgressive and erotic dimensions of gender nonconformity. In a series she made specifically for the exhibition, entitled Princess and Princess in the Garden, Hoseini imagined an environment in which groups of women perform ambiguous acts of violation and pleasure. The works allude to the Persian miniature tradition: an Iranian form of private household painting in which strict rules against the portrayal of human figures are loosened, allowing for the exploration of more intimate themes, such as, love. Says Miller, “In Iran there is this danger suffused with same-sex love, that kind of relationship can represent real, life-threatening tragedy.”

In a world where such life-threatening repercussions are often the product of masculine social codes and policing, the need for an unfettered feminine imagination becomes the best avenue for expanding political possibilities. Here, narratives about bodily freedom, undone from repressive stereotypes or control, are written in the style of magical realism. Take, for instance, Zadie Xa’s “magical garments.” Her ornate, hand-crafted jackets, adorned with artificial hair, letterman jacket patches, and “monolid” eyes, storyboard the possibilities given to an “other” by disempowering stereotypical iconography, and turning it into streetwear. It’s a partial rebuke of on-going commodifying and essentializing of Asian cultures wrapped in a performative identity. Xa’s alter ego, Yung Yoomi, is a merging of the popular rap prefix with her given Korean name. “She’s someone who I think is very interested in mythologizing, using these stereotypes that have been directed to her throughout her life and redeploying them as her own weaponized language,” Miller says of Xa’s approach. The insidious patriarchal and colonial systems of identity domination, in Xa’s DayGlo patterns, become irreverent objects to be wielded by the wearer.

Fittingly, perhaps, the loud apotheosis of Body Armor is a piece of jewelry. Ana Pellicer’s hand-hammered copper necklace was built to the scale of the State of Liberty, a powerful woman “given” to the United States as a gift. The piece is a powerful, poetic ode to a resilience that is be uncompromising, unapologetic, and, above all, stunning. It’s one of six copper pieces the artist crafted in honor of the monument’s centennial in 1981. Occupying the better part of the room, it’s strung from the ceiling and sinks down across the floor. While the scale and the intricacy of Pellicer’s necklace conveys a  power not unlike the prize belt proudly displayed by one of Delilah’s subjects, it’s also the demanding question at the center of the exhibit: Will there be a time when adornment is simply a superfluous act of pleasure and not an act of protection? 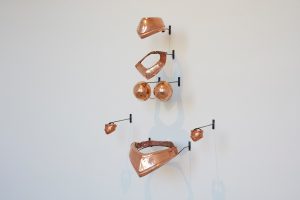 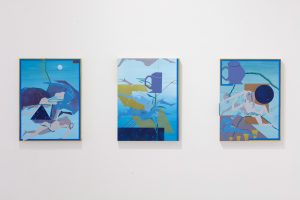 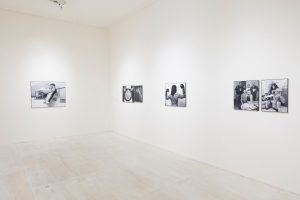 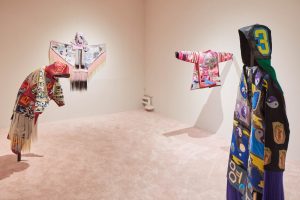