In his first collection for Louis Vuitton Men's, Virgil Abloh announced with color, and confidence, a new era for those who dream of a better world.

Somewhere over the rainbow, skies are blue, and the dreams that you dare to dream really do come true.

If there were a line that described Virgil Abloh’s rise from the child of Ghanaian immigrants who grew up in Rockford, Illinois—a city that’s a one-hour-and-forty-five-minute drive from Chicago—to one of the first black fashion designers to take the helm at a major luxury label, it would be the titular song Over the Rainbow, written for The Wizard of Oz, the film that inspired his first runway show with Louis Vuitton. 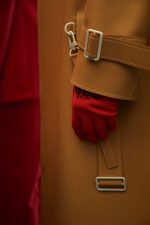 “Luxury and street or black and white?” the Ghanaian-American designer asked in an Insta-story teaser for his first outing with Louis Vuitton Men’s. Abloh’s debut collection answered that question by seamlessly fusing together streetwear and luxury, turning them into one, but he also made significant strides in diversity in fashion with a cast of models who were as varied as the colors in the rainbow-hued runway that stretched through the courtyard of Palais Royal. In doing so, the polymath changed the course of fashion history with his debut as men’s artistic director of Louis Vuitton at Palais Royal in Paris.

“I don’t call myself a designer, nor do I call myself an image-maker,” wrote Abloh in a the show notes titled The Vocabulary According to Virgil Abloh. “I don’t reject the label of either. I am not trying to put myself on a pedestal, nor am I trying to be more, now. I would like to define the title of Artistic Director for a new and different era.” In Abloh’s hands this new era of Louis Vuitton Men’s is all inclusive, from the democratic front row-only seating, to the lucky 3,000 fashion students he invited, with T-shirts in the standing section that matched the color of the runway gradient, to the casting his friends Dev Hynes, Lucien Smith, and Kid Cudi to walk in the show. 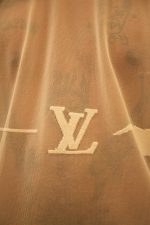 Abloh used his graphic design expertise to come up with “We Are The World,” a map titled after the Lionel Richie and Michael Jackson Live Aid anthem that traced the origin of every model walking the show. Stretching across three pages, black, red, and grey dots traced the lineage of models and their birth parents. The dots represented every continent with human inhabitants, reaching as far as the Philippines and New Zealand, to Yemen and Ghana—the West African country from which Abloh’s parents hail—to Haiti and the Dominican Republic. 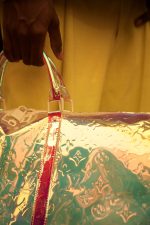 For the skeptics of high fashion, Abloh outstripped all expectations in his debut, demonstrating that streetwear and luxury could come together as one, just one of many subplots hammering home a vital message of unity across race, identity, and status. A parade of black models came out in monochromatic white looks that were refined, elegant, and inflected with just the right dose of edge, followed by a section of taupe stylings, beginning with a tailored long coat, and ending with a hoodie. Abloh succeeded at elevating the puffer, making it in an sophisticated, yet understated, and in off-white. Then, like white light going through a prism and turning into a rainbow—the starting point for the collection—the colors emerged. There was tie-dye, and bold colors, the silhouettes were clean and minimal, the visual analogy to The Wizard of Oz being rendered in full. There was a print of  Dorothy lying in a sea of poppies, dreaming, on a hooded pullover jacket; the silhouettes of Dorothy, the Lion, the Scarecrow, and the Tin Man walking down the Yellow Brick Road on a pair of trousers; and an ambitious knit sweater of the iconic scene of the main characters walking along the Yellow Brick Road.

You see, here in the era of Virgil Abloh’s Louis Vuitton, dreams are something that can come true, for himself, and as his multifaceted comment the rich color palette of the world would suggest, for any of us, too. 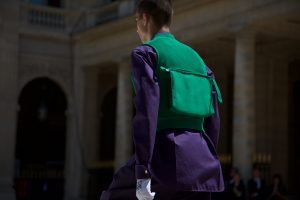 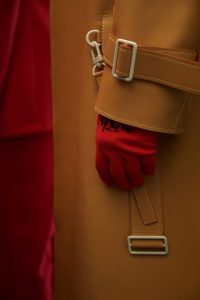 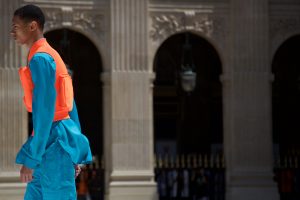 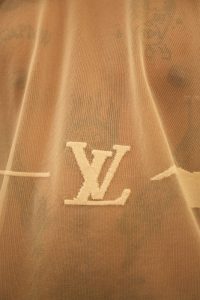 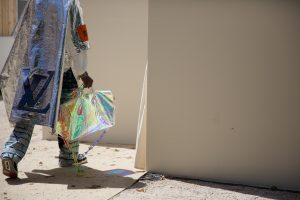 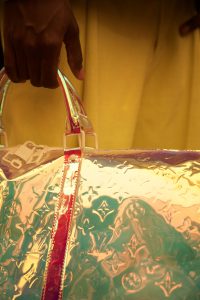