Opening this week at the Museum of Modern Art is “Toward a Concrete Utopia: Architecture in Yugoslavia," a new exhibition on the cold architectural style.

Yugoslavia first gained international recognition in 1922 before before officially being renamed the Kingdom of Yugoslavia in 1929. After years of attempting to remain independent from the pressures of Fascist Italy, Nazi Germany and the communist U.S.S.R. during World War II, the post-war period that followed renewed hope in the emerging nation, which formally distanced itself from the Soviets in 1948. Its socialist system eschewed the centralized governing of communist countries, instead running factories through worker cooperatives, resulting in tremendous growth there during the ‘50s up until 1980, when its leader,  Josip Broz Tito, died, and political tensions eventually leading to the country’s fall in 1992, breaking Yugoslavia into the following countries: Croatia, Serbia, Montenegro, Kosovo, Slovenia, Bosnia and Herzegovina, and Macedonia.

During this period of “self-management,” Yugoslavia went through nearly half-a-century of widespread construction, creating structures that sought out to transform the burgeoning nation into a modern country that strived for an ideal way of life. Through January 13, 2019 the Museum of Modern Art in New York is presenting an exhibition entitled “Toward a Concrete Utopia: Architecture in Yugoslavia, 1948–1980.” The survey features over 400 drawings, models, photographs, and film reels collected from across the region.

“Historically speaking, a thorough investigation of the architectural production of socialist Yugoslavia will lead to a better understanding of an important but understudied chapter of architectural history in the bifurcated world order of the Cold War,” said Martino Stierli, the Philip Johnson chief curator of architecture and design at MoMA. “From a contemporary point of view, this body of work serves as a reminder that architecture can only thrive when there is a broad societal understanding of architecture’s power to transform and elevate society and the quality of life it offers citizens.”

The exhibition is divided into four themes: Modernization, Global Networks, Everyday Life, and Identities. The expansive era of construction hoped to improve the country’s economy and the quality of life for its citizens while catapulting itself into the future. In the exhibition, the Belgrade Master Plan, dated 1951, color codes the ambitious urban development of the city, the former Yugoslav capital that is currently the capital of Serbia, that needed to be reconstructed after the Nazis launched an air attack on it during World War II. Uglješa Bogunović’s, Slobodan Janjić’s, and Milan Krstić’s Avala TV Tower, which was constructed between 1960 and 1965, shows the beginnings of Yugoslav brutalism that saw buildings erected that resembled giant concrete sculptures. Then there are images of the beautiful brutalist monuments, like the curved columns of Živa Baraga’s and Janez Lenassi’s 1965 Monument to the Fighters Fallen in the People’s Liberation Struggle in  Ilirska Bistrica, Slovenia, or Jordan and Iskra Grabul’s futuristic Monument to the Ilinden Uprising that was built from 1970 to 1973 in Kruševo, Macedonia.

It is important to remember the modernization, hope and ambition that these massive concrete monoliths represented, and to preserve the legacy of these beautiful structures that are relics of the former Yugoslavia. 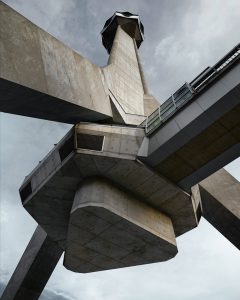 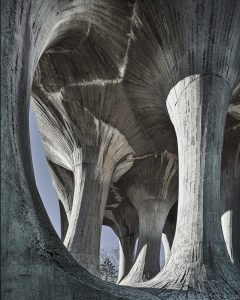 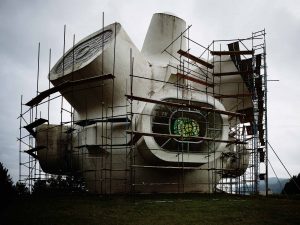 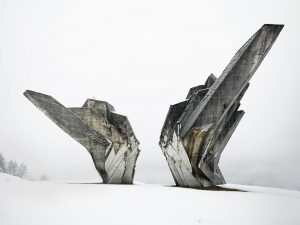 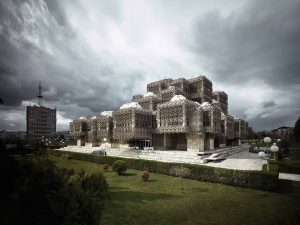 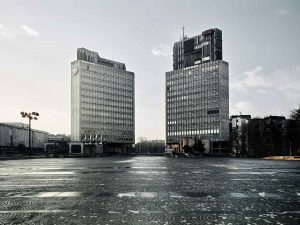 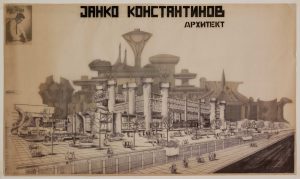 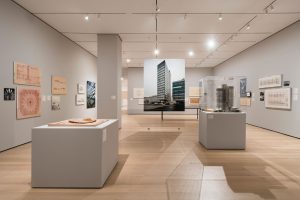