Embellished, exotic, and exclusive as ever, couture celebrated a century and half of turning heads during Paris Fashion Week.

Luxury fashion is in a state of transition with social media’s democratization of the industry. It’s more approachable and more attainable for the masses, like those who find themselves queueing up early in the morning at the Louis Vuitton or Hermès stores in Paris in hopes of obtaining a coveted Birkin bag or the Louis Vuitton Neverfull bag. The trend in sportswear has also called for a more casual aesthetic in ready-to-wear. For those looking for something a little more exclusive, there’s couture—the über exclusive creation of custom-fitted clothing embellished and hand sewn with delicate beads, sequins, fur, and lace governed in France by the Fédération de la Haute Couture et de la Mode.

“We are celebrating tonight the 150th birthday of haute couture, and haute couture is doing great, is still alive and living in Paris,” Pascal Morand, the president of Fédération Française de la Haute Couture, told a crowd that included Dior’s Maria Chiuri Grazia and Christian Louboutin during couture’s 150th anniversary cocktail party in the opulent garden of the Petit Palais.

Couture Week is a smaller more intimate version of the ready-to-wear fashion weeks with fewer luxury designers presenting, and a number of luxury labels taking the opportunity to present their collections during that time, which usually takes place in January and at the beginning of July.

This season, Miu Miu kicked off the week with the Miu Miu Club at Hotel Regina to hold its Cruise 2019 collection fashion show, followed by a dinner and party. While not technically couture, a number of the pieces in the collection, inspired by the guests who frequent the storied Paris hotel, had couture-like accoutrements, like the intricate embellishments—several dresses were adorned with giant pearls, paillettes, and rhinestones—or the feathers that lined the hemlines.

The following day, Demna Gvasalia, who showed Vetements Spring 2019 collection off the official couture calendar, put out a couture offering—a one-of-a-kind, hand-painted maxi skirt covered in a colorful glitter pattern painted by Gvasalia himself that will retail for $15,000. Later that evening, Clare Waight Keller, the artistic director for Givenchy who designed Meghan Markle’s minimal, yet elegant wedding gown, looked deep into Hubert de Givenchy’s archives for her Fall 2018 couture collection. She took a sculptural look with a dramatic, raised neckline from his Fall 1972 collection and reinterpreted it for today in all black with a similar one with a black belt around the chest and the neckline reaching until just below the eyes. For another look, Waight Keller took a feathered black cape from Givenchy’s Fall 1968 collection, updating her version as a hooded cape.

Maria Grazia Chiuri found inspiration through Elisabetta Orsini’s 2012 book, Atelier: Places of Thought and Creation.  The designer used sumptuous silks and organza for the beautiful dresses, recreating Christian Dior’s hour-glass-shaped Bar suit from his groundbreaking spring 1947 New Look in a rose gold lamé, and another one in dulled gold herringbone lamé.  For several pieces she looked at tapestries by Manufacture des Gobelins, the Paris tapestry factory that was the royal supplier for the French monarchy from the reign of Louis XIV, to create a cashmere intarsia coat with a forest covering it, as well as another cashmere coat inspired by Gobelins “Mille-Fleurs” tapestry, implying that couture clients are like royalty.

Over at Maison Margiela, John Galliano bared the inner workings of couture for the label’s highly conceptual Artisanal collection by exposing its inner workings through a layered collection that revealed the delicate stitching that happens beneath the clothes. He added elements from the Margiela oeuvre, like the tie-dyed Tabi boots, and sleeping bag coats, while capturing the zeitgeist of today, referencing digital nomads and our technology-obsessed culture through virtual reality goggles worn by the models and mobile phone mounts stitched on to a jacket sleeve and attached to models’ legs. Galliano’s layered approach that saw translucent plastic and fabric covering hair and dresses aligned with the protective shield trend for fall. In the podcast that explained the collection, the designer said that it was about “creating your own world within a world that’s very troubled at the moment.”

Viktor Horsting and Rolf Snoeren celebrated 25 years of Viktor & Rolf through a catwalk retrospective that recalled the most iconic looks from the quarter-of-a-century of their brand and elevated and unified them by recreating the looks all in white with Swarovski embellishments. The accordion jacket that was presented in Fall 2003 where all the models were styled to look like Tilda Swinton—the actress and muse opened the show—was redone in all white with pinstripes done in Swarovski crystals. The conceptual tulle gown done in a shade of melon with holes cut out of the silhouette from Spring 2010 was reintroduced in white with Swarovski crystals lining the top of the bodice.

At Fendi, Karl Lagerfeld and Silvia Venturini Fendi gave couture clients a choice: to wear fur or not to wear fur. The Italian fashion house officially changed the collection from haute fourrure to haute couture, which freed them to create fur alternatives in the form of organza plissé, frayed chiffon, and sequins shrunken by heat. There were, of course, pieces made with real fur, like on the looks that took inspiration from a lattice and floral plate that was recreated on a look that alternated the motif with lilac-hued fur stripes.

Pierpaolo Piccioli closed Haute Couture Week with Valentino, reminding us of the fundamental elements of couture—the beauty and fantasy behind it, displayed through intricate embroidery and fragile beading The designer transported us to a place where Greek mythology and Medieval armor was mashed up with Pasolini films and Ziggy Stardust. The collection showed the grandeur of glam rock in glittery, floor-sweeping capes, and gowns that involved pearls, sequins, and rhinestones on rich brocade fabrics, while Greek imagery was stitched together with a mix of colorful fabrics. Billowing, poofy gowns displayed the elegance and the luxury of couture several of which were made in Valentino red.

The ritual of couture is one that is more personal and intimate than with ready-to-wear, due to the one-on-one time spent with the clients to custom fit the creations. Couture is certainly a step above in terms of pricing and craftsmanship—the epitome of luxury clothing, and after concerns that the state of couture is in jeopardy, it is, indeed, as Morand implied, “alive” and well after 150 years. 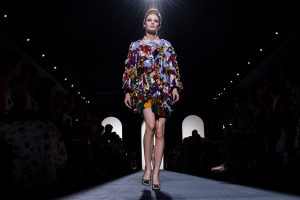