Raf Simons played with the bright hues and nostalgic associations of America's sunniest university, the University of California, in his latest collection for Calvin Klein.

I remember receiving that large envelope in the mail years ago that informed me of my acceptance to the University of California at Berkeley. At the time, it was the top public school in the United States, and more importantly, my dream school. With that letter, I felt that anything was possible. As I entered my freshman year, it was practically requisite for students to show their school spirit through t-shirts that flaunted Cal, the school’s nickname, or blue hoodies that had the silhouette of the school’s mascot, the California Golden Bear, on it. Throughout my four-and-a-half years there I acquired a number of of pieces of UC Berkeley apparel—my favorite being a a grey hoodie that had the words “Berkeley” and “California” emblazoned on it in navy that had I affectionately wore throughout my time there and while I studied abroad in Paris and years after I graduated until it fell apart. Each piece represented the pride I felt in going to a top college, and the feeling that I had the whole world in front of me.

All those feelings returned when I previewed Raf Simons’s Calvin Klein 205W39NYC pre-spring 2019 collection in Paris last week.  My eyes widened as I saw the UC Berkeley seal stitched in blue on the corner of a gold turtleneck maxi dress. “I went there!” I exclaimed to the publicist showing me around. “Yes, he did a collaboration with Berkeley and Yale,” she explained. I combed the racks of the Calvin Klein Paris showroom with glee as I discovered each piece in the collection with my alma mater’s name, logo, or mascot on it. There was a navy sweater with a blue, white, and gold pattern and the name Berkeley in gold knitted into it. A gold sweatshirt with exaggerated proportions with Berkeley in blue on its chest and the school’s seal just below it. A letterman jacket front a giant blue C on its left breast, California on one sleeve, and a silhouette of a Golden Bear in navy with a gold outline. On an oversized gold t-shirt a blue Golden Bear stood out on its front. “Yes, we thought anyone who went to Berkeley or Yale would be stoked when they saw the collection,” another publicist responded after I expressed my excitement over seeing the logos and emblems of my alma mater and remembering the optimistic view I had during my youth there.

Seeing Berkeley all over the Calvin Klein 205W39NYC pre-spring 2019 collection brought back a sense of youthful nostalgia that I never expected to feel during couture week in Paris. While it wasn’t a fashion school, it did educate a number of names in the industry during my time there like Patrik Ervell, who would go on to start his eponymous label and eventually become men’s designer for Vince,  Carol Lim and Humberto Leon, who would go on to create Opening Ceremony and become the creative directors for Kenzo; and Kate and Laura Mulleavy, the sisters behind Rodarte.

The Calvin Klein 205W39NYC pre-spring 2019 collection began with “the collective experience of youth.” Simons channeled with a collection that called back to the time of team sports, summer camp, high school proms, and college. An elongated off-white turtleneck dress and black and powder blue tuxedo were inspired by prom regalia, while collegiate blazers were cropped, widened, and given sleeves reshaped with a curved fin. The colors and textures of basketballs and footballs were shaped into pointy pumps and handbags, as a vivid color palette, pulled from according to the collection notes, “Technicolor film, Pop art, and Googie diner architecture” were used on bright puffers and tie-dyed shirts that recalled the youthfulness of the ‘60s hippie movement. Elsewhere antique sleeping bags became quilted jackets while sequins were given the technicolor treatment with a colorful print over them.

Simons successfully captured the optimism of American youth in the Calvin Klein 205W39NYC pre-spring 2019 collection, and with it I also re-discovered that carefree idealism and optimism that I felt during my college years. 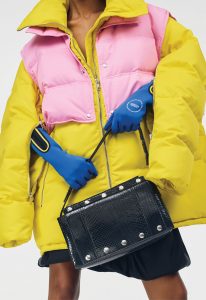 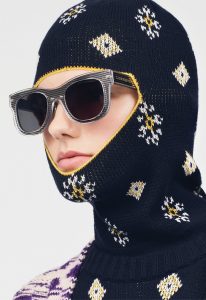 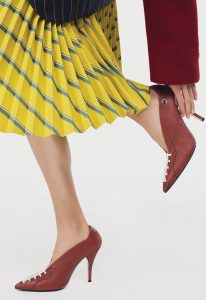