Rick Owens titled his spring 2019 men’s collection Babel — which the Oxford Dictionary defines as “a confused situation” — is the ancient city on the Euphrates River that was once a powerful, political powerhouse. The city was the location for the Tower of Babel — the tower a united, harmonious group of people who spoke the same language wanted to build to reach the heavens in order to be equal to god, who, unhappy with the idea, struck it down and divided the people into various tribes who could no longer communicate with one another because they could no longer speak the same language — which also informed the Rick Owens spring 2019 men’s collection where he questions the confused era in contemporary America and cites the need for a more united, more liberal state of mind.

Smoke bombs in shades of blue, yellow and red went off on the runway of Rick Owens’s Spring 2019 show as an instrumental version of Estonian rapper Tommy Cash’s track “Pussy Money Weed” played over the speakers. Models walked through these colorful clouds in the courtyard of the Palais de Tokyo—signaling a feeling of recklessness and danger that the designer wanted to convey. Owens made a subversive statement about the need to overpower the ideals of the Trump presidency for a more liberal America. 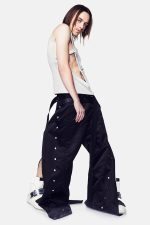 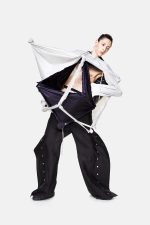 Rick Owens’s vision of America is about rebellion — a substantial sentiment with the  president’s blatant racism, classism and lack of empathy. The fashion designer’s spring 2019 men’s collection commented on the current state of the country. In this collection, Owens questioned the condition of the United States — is it chaotic or composed? Confused or structured? Owens referenced the Russian Constructivist movement, the era of art, architecture and design that coincided with the fall of capitalism in Russia, in particular Tatlin’s Tower — a proposed, never-built tower by Russian artist and architect Vladimir Tatlin that was meant to be erected in St. Petersburg after the Bolshevik revolution of 1917 as a monument to the communist party.

Models marched out hiking boots and sandals from Owens’s newest collaboration with Birkenstock — a brand that the show notes said  is “popularly associated with 1960s American liberalism” — demonstrating that Owens is aligned with the countercultural liberalism of the 1960s.  The lines and planes of the Russian Constructivist movement showed up in the form of angular, cut-out muscle tees, sculptural charms that dangle from the waistline, and tented nylon parkas that used poles for definition. The designer said the poles were his idea of hope. Blocked striped and solid shirts were dark interpretations of the American flag, while tattered  deconstructed denim skirts showed signs of rough weariness. Black, wide-legged, raver-ready pants with button detailing on the side also showed up, as masks adorned with sequins and long streamers that dangled from the mouth served as a shield of protection from the chaos. 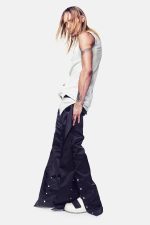 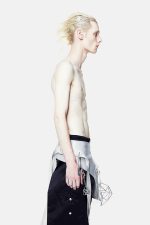 Although the United States is in what appears to be a dark path, Owens, through his creativity, alludes to a future where the people overpower the government, a future that rises above the current chaos. 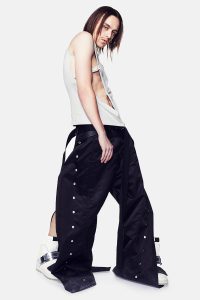 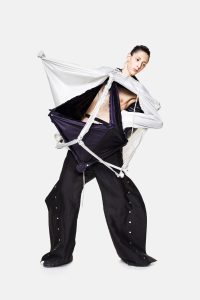 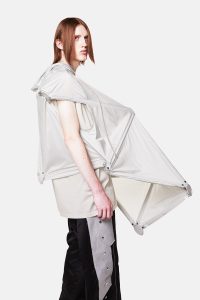 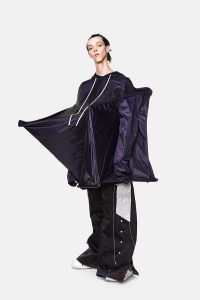 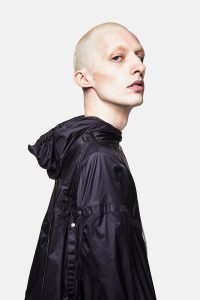 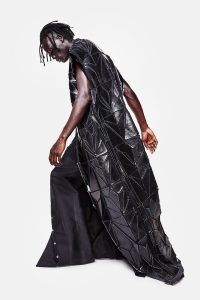 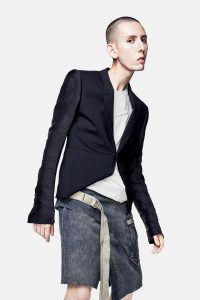 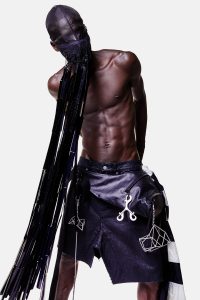 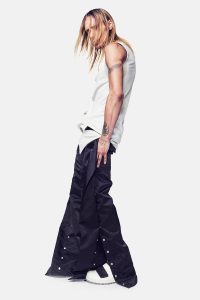 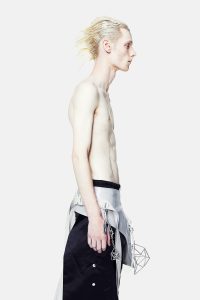