A traumatic and violent youth served as an astonishing storyboard for the Georgian's latest collection.

Ethnic and civil unrest plagued the Caucasus region of the Soviet Union during the ’90s as a violent civil war erupted within Georgia. When Zviad Gamsakhurdia was elected president in 1991, the Georgian nationalist vowed that its capital, Tbilisi, would have authority over Abkhazia and South Ossetia, but Gamsakhurdia’s term would prematurely end with a bloody coup d’état that took place between December 1991 and January 1992. The country became embroiled in a civil war that lasted until 1995. Between 1992 and 1993, ethnic hatred led Georgia to war with the region Abkhazia, and as a result, 20,000 to 30,000 people were killed. Abkhazian separatists managed to ethnically cleanse 230,000 to 250,000 Georgians, forcing them out of the region.

One of the hundreds of thousands Georgians forced out of the region was Demna Gvasalia, who lived with his family in Sukhumi, the capital of Abkhazia. Gvasalia fled with his family in 1993. Gvasalia and his family soon found themselves refugees, living in Ukraine and Moscow before settling in Düsseldorf, Germany. The trauma Gvasalia and his family suffered ran deep. After two years in therapy, the fashion designer was ready to create his visual autobiography in the form of the Spring 2019 Vetements collection. If it had been his first collection, Gvasalia recently said, it would have been his real self.

Aside from the Antwerp hoodies in Vetements’ Fall 2015 collection, which referenced his fashion education at the Royal Academy of Fine Arts there, Gvasalia seldom showed aspects of his life in his clothes. This season, Vetements—French for clothes—is no longer just about the clothes, it’s the story of Gvasalia. The streets surrounding the show’s location in Paris’s 19th arrondissement have been a recent gathering place for refugees. Encampments line the boulevards. It’s a highly considered move for a designer who was once a refugee himself. The designer wore a black T-shirt with a target and a small hole through the front and back of the shirt, symbolizing the bullets that were once aimed at him.

The show opened with a young Georgian model, a callback to a 17-year-old Gvasalia, who wore a nude shirt covered with the types of tattoos Georgian prisoners would get to flaunt their mob ties. Over half of the show’s approximately 70 models hailed from Georgia, a choice the designer made in order to give the young Georgians a voice. 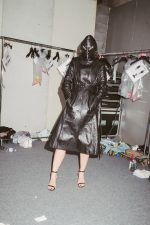 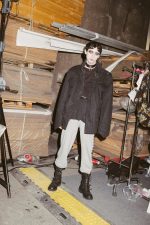 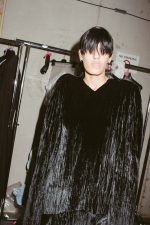 Other looks referenced the actual civil war in Georgia. Army camouflage on jackets represented the soldiers called to battle and trousers composed of sweatpants layered beneath shredded camouflage shorts told the narrative of his neighbors—regular men who once hung around wearing jogging pants before being drafted to fight in the military. Leather jackets with hoods that zipped all the way through to cover the face represented the duality of a protective shield and the desire for the young Gvasalia to be invincible. Targets with Looney Tunes-characters running around it were placed on hoodies that had holes through the bull’s eye—another reference to the gunfire that was rampant during the Georgian civil war. A minimal white dress was informed by a bedsheet his grandmother threw over herself when they escaped. One hoodie and shirt came with printed with a Russian expletive in Cyrillic that literally translates to “go to dick,” but has no direct English translation and, would get one punched in the face if shouted out there. 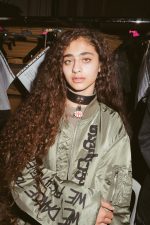 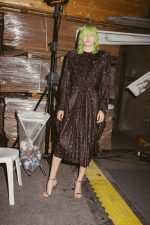 The collection also served as a love letter to Georgia, furthering its status as a country that the fashion world is watching. Wide-legged khaki colored trousers paired with a fitted grey tank, symbolized Kartlis Deda (Georgian for “Mother of a Georgia”) an enormous monument of a woman raising a bowl of wine in one hand to welcome guests and holding a sword in the other to ward off enemies. The designer put the Georgian flag on several T-shirts and long-sleeved shirts, with its name in English letters at the bottom, and Georgian characters at the top. One of the heavy-shouldered Georgia t-shirts was printed with the flag and lettering in a rainbow gradation—a risky decision for Gvasalia, who feels that it’s too dangerous to return to Georgia, because of the rampant and violent homophobia in the country.

Billowy, pleated feminine dresses with floral prints—a signature mark of the brand—also came out, as did numerous references to his grandmother. A red-and-white gingham maxi skirt paid homage to her apron. Dresses, trenches and skirts assembled with floral-print and fringed Russian babushka scarves also found their way into the collection. One black maxi skirt, hand-painted in glitter by Gvasalia, will be sold as a $15,000 made-to-wear couture piece. When the collection debuts this fall, Vetements will also release an app this fall that will translate the Georgian and Cyrillic wording or lead users to a Wikipedia page on the Georgian civil war when it’s aimed at the clothes.

Despite the starting point of the collection being one of a traumatic and violent youth, it was all about love—love for his motherland, and love for the partner he married last year—the chairs that lined the two long banquet tables that served as runways were decorated with chiffon white bows tied around their backs in the style of a Georgian wedding that he never will have, and the final look was a fluid, minimal white wedding dress. Gvasalia bared his soul in this collection, which makes us wonder if we’ll see more of his real self in the future. 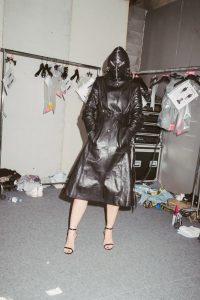 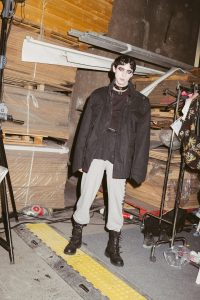 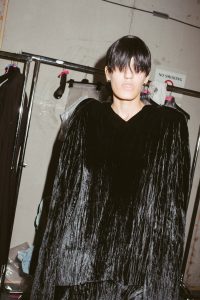 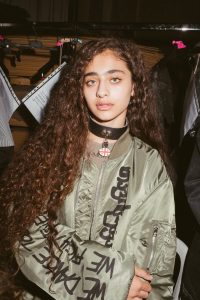 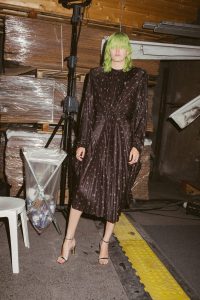