Since Nike announced its partnership with Virgil Abloh, the Off-White founder and Louis Vuitton men’s artistic director has not disappointed. Not only in the design of the clothes, but also with the advocacy and positive message that he has sent to the world regarding female athletes. Abloh outfitted Serena Williams for the 2018 US Open with what came to be known as the tutu heard around the world. His original design for the world-renowned athlete in the French Open consisted of a sleek catsuit, of which Bernard Giudicelli, president of the French Tennis Federation, called into question along with their “respect for the game.” In an act of protest and a display of fierce glamour, Williams reclaimed the agency over her body that the institution had held hostage, and showed up to her first match of the US Open in a one shoulder dress, complete with tutu, fishnet tights, and sneakers embossed with the only rightful title of someone with 13 grand slam wins under her belt: “Queen.” When asked by Vogue to speak on how Virgil Abloh’s designs made her feel, she responded, “I felt so feminine in the tutu, which is probably my favorite part of it. It really embodies what I always say: that you can be strong and beautiful at the same time.”

The same sentiment rang true for the Off-White Spring/Summer 2019 show. Weaving together athletic apparel such as spandex leggings, shorts, tracksuits, and sewn-together Nike tube socks along with more overtly feminine pieces such as flowy lace blouses, petticoats, statement jewelry, fanny packs and even more tutus—we can hear Serena Williams’s words echoed throughout the entire collection. The casting for the show was comprised of a faction of eight track and field stars reigning from all corners of the globe including Great Britain, Hong-Kong, Colombia, France, England and the United States. American high jumper Vashti Cunningham, French middle distance runner Rénelle Lamote, Hong Kong high jumper Cecilia Yeung, American sprinter English Gardner, British heptathlete Katarina Johnson-Thompson, British track and field athlete Nafissatou Thiam, Colombian jumper Caterine Ibargüen, and British sprinter Dina Asher-Smith were among the female athletes who walked down the Off-White runway. Abloh put out innovative athletic wear designs and technology juxtaposing them next to the historically nonfunctional nature of garments associated with the female identity in the form of massive hoop skirts, stiletto heels and heavy chain necklaces. The Off-White Spring/Summer 2019 collection acts as a catalyst for a larger conversation of gender, and even more so a disruption to the trite narrative of what it means to design womenswear. 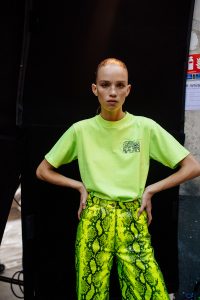 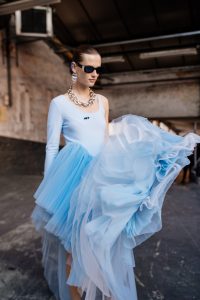 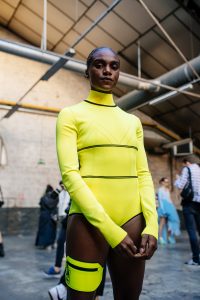 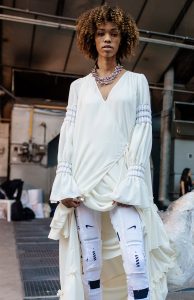 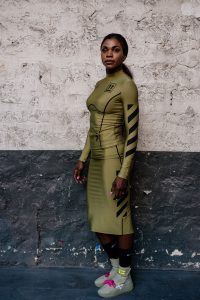 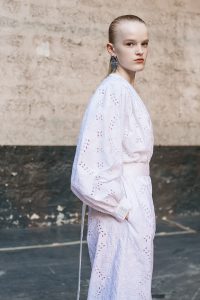 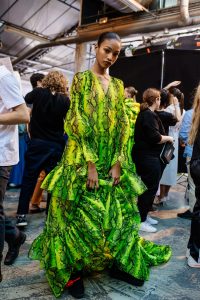 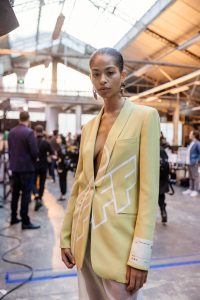 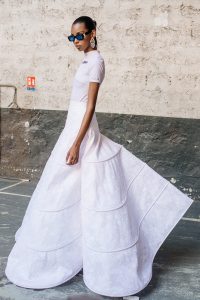