Document looks at the trends from Milan's designers, from Luke and Lucie Meier’s easygoing minimalism at Jil Sander to Domenico Dolce’s and Stefano Gabbana’s Italian extravagance.

Milan Fashion Week wrapped up after six days of runway shows throughout the Italian fashion capital. There were stripes of all kinds, and endless shades of brown at a number of shows. From Luke and Lucie Meier’s easygoing minimalism at Jil Sander to Domenico Dolce’s and Stefano Gabbana’s Italian extravagance at Dolce & Gabbana, the collections at Milan Fashion Week ran the gamut. Here are the trends that Document spotted during Milan Fashion Week.

There were stripes of all kinds at Milan Fashion Week, from the playful, like the thick ones that decorated feather-covered minidresses at MSGM, or the purple and orange vertical ones that were drawn onto a look that included trousers and a bow-tied midriff top at Moschino. At Versace, primary-colored stripes accented a sweater and turtlenecks; Erika Cavallini put vertical ones on a navy and white pajama-inspired set; and Arthur Arbesser used a yellow, green and oxblood stripe on skirts, flowy dresses, and on a coordinating shirt and trousers.

The polka dot motif proved popular on the runways of Milan Fashion Week. Miuccia Prada placed tiny, delicate white Swiss dots on a sheer black dress. Meanwhile, at Dolce & Gabbana, Monica Bellucci opened the Dolce & Gabbana show in a sexy, off-the-shoulder, black-and-white polka dot dress. Max Mara had a number of polka dot looks, including a leather trench coat, and on a matching suit. At Marni, rough, painted dots was among the prints used throughout the collection.

50 Shades of Brown
Brown was everywhere on the Milan runway, like at Fendi, where Karl Lagerfeld used a shade he referred to as “off-brown” on several looks. There was a rich, chocolate brown perforated blazer paired with a pleated skirt, several transparent jackets trimmed with brown leather, and a body-hugging, light brown leather dress. There was a No. 21 hooded windbreaker dress, and workwear-inspired looks in deep brown at Jil Sander. At Max Mara, whose signature hue is Camel, there was a ruffle-sleeved trench, a one-shoulder jumpsuit, and a broad-shouldered pantsuit.

Black Magic
It’s easy, it’s chic, and it’s a color that looks good on just about everyone. Tried and true, basic black made several appearances during Milan Fashion Week. At Versace, it was used in a strapless black leather minidress, and silk spaghetti-strapped dress. At Jil Sander, it was simple and minimal, on a v-neck wrap dress with sculptural sleeves, a baggy jumpsuit, and an oversized vest. At Prada, the color came out on several trapeze minidresses and leather jackets. Meanwhile, Roberto Cavalli had a long blazer paired with biker shorts and on a tight asymmetrical dress.

Crochet
Crochet has been slowing proliferating on the runways, and it continued to do so in Milan. Simone Rocha used crocheted purple flowers on one of the designs for her Moncler collaboration, while Jil Sander put out a monochrome black crochet dress. Dolce & Gabbana also had a feminine crocheted black dress on its runway.

Tie Dye
The tie-dye trend continued in Milan, with color on black t-shirt dresses at No. 21; various separates including a cardigan, suit, and sweatshirt at MGSM; and on skirts and dresses embellished with sparkly rhinestones at Prada. 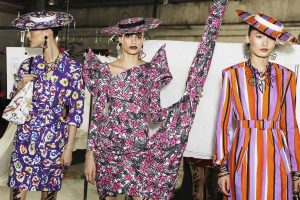 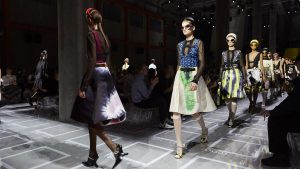