Ahead of November’s midterms, artists will run billboards in every US State plus Washington, D.C., and Puerto Rico, that, according to its organizers, is the “largest creative collaboration in US history.”

Organized by For Freedoms, an arts initiative founded in 2016 by artists Hank Willis Thomas and Eric Gottesman, 50 State Initiative has over 300 artists have worked on the billboards, placed up and down the country and designed for each individual state, including Trevor Paglen, Rashid Johnson, Tania Bruguera, and Theaster Gates. Only four states, Alaska, Hawaii, Maine, and Vermont, do not allow billboards, but the organization says it will use banners instead.

“The ‘50 State Initiative’ can change the political landscape by inspiring more people to participate in civic life and broadening the concept of what democratic participation looks like,” the project’s producer, Miriam Fogelson, told artnet News.

Jeffrey Gibson, THIS STORY HASN’T BEEN WRITTEN YET, I-95 & Red Oak Brattleboro Rd, Raleigh, NC. Photography by Tianran Qin. Courtesy of the artist and For Freedoms.

Each billboard has been funded through 52 simultaneous Kickstarter campaigns. In an interview for Kickstarter’s Medium site, For Freedoms’s co-founder Gottesman explained how the 50 State Initiative came about. “We had this series of exhibitions, but we realized we wanted to work in a more public way,” he said. “By the way, this whole thing was started and conceived before the 2016 U.S. Presidential election. This was a response to a larger set of questions about politics and speech rather than to a specific person.”

The organization started with a series of billboards in 14 states in fall 2016 created by themselves and artists they selected, primarily in swing states.  A billboard that read, “Make America Great Again” in Pearl, Mississippi, received the most media attention. It depicted Spider Martin’s March 7, 1965 photo of “Bloody Sunday,” when a group of peaceful civil right activists on the Edmund Pettus Bridge who ended up being attacked by state troopers with tear gas and billy clubs. 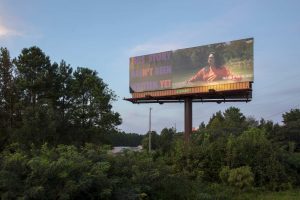