The exhibition Art of Native America: The Charles and Valerie Diker Collection will mark the first time Native American art will be displayed in the Met's American Wing.

A new exhibition opening this week at The Metropolitan Museum of Art called Art of Native America: The Charles and Valerie Diker Collection will be the first time museum’s iconic American Wing will play host to a collection of Native American artwork.

Traditionally, the museum has always shown Native American art in the context of traditional artifacts from Africa, Oceania, and the Americas. But since The Met began incorporating pieces from the Charles and Valerie Dikers’ private collection, they’ve been forced to reassess their curatorial approach.

The couple has been longstanding advocates of museums showing Native American artifacts. Founding chairman and chairwoman of the National Museum of the American Indian’s George Gustav Heye Center, the pair have spent the past 40 years trying to change in how we perceive Native American art, by encouraging museums and galleries alike to show them alongside other notable American artists like Mark Rothko and Jackson Pollock.

The news first came to light back in April, when a press release from The Met confirmed it planned “to display art from the first Americans within its appropriate geographical context” in the fall of 2018. The 116-piece  exhibition has been pulled together from two separate donations by the Dikers. “These superb works will be an extraordinary addition to The Met collection,” said Carrie Rebora Barratt, deputy director for Collections and Administration, after making the announcement. “They have been selected from the largest and most comprehensive collection of its kind in private hands today and are of the highest aesthetic quality.”

“We always felt that what we were collecting was American art,” Charles Diker said. “And we always felt very strongly that it should be shown in that context. We wanted quality, not quantity, and we wanted the collection to represent the breadth of the country. We wanted it to be a collection you could teach from.” 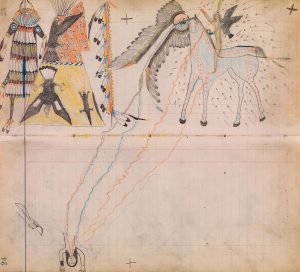