Willem Dafoe takes you inside his fanaticism

Writer and critic John Ortved sits down with the prolific actor to discuss the ritual of performance, falling in love with one's craft, and why Dafoe brings only a suitcase to set.

The 58-year-old Willem Dafoe brings a penetrating depth—at once profoundly humorous, troubling, serious, and odd—to his performances, of which, in a career spanning 40 years on screen, stage, and in art, there have been thousands. Dafoe’s beguiling grimace and the unsettling talent behind it have defined Scorsese’s Christ, Marvel’s Green Goblin and countless other roles less controversial or blockbuster, in films of all sizes. Onstage, Dafoe has performed alternative and experimental theatre since the mid-seventies. He is a founding member and has almost three decades with the Wooster Group, New York’s foremost experimental theatre company. Today, he continues to surf along theatre’s fringe while rollicking in the mainstream, collaborating with the likes of Marina Abramovic on a project that is neither performance nor art nor theatre, while starring in Wes Anderson’s upcoming The Grand Budapest Hotel. He also stars in Anton Corbijn’s recent A Most Wanted Man—and those are only two of the seven film projects he’s currently involved with. From Rome, the actor reveals the tricks to his very elaborate trade: how to avoid carrying baggage, how to hold your own dancing with Baryshnikov, and why we shouldn’t trust anything we hear on the Internet.

John Ortved—What are you doing in Rome?

John—You’ve worked with him in Rome before.

Willem—Yes. [Laughs] I have. I’ve worked with him in New York and twice in Rome.

Willem—That was a very beautiful time for me. I don’t know whether it was being 21 years old or if that was a particularly good time for the city. Of course, those were the “Drop Dead New York” days. It was a lot funkier. It was a lot more dangerous. It was a lot. Everything was a little harder, but I was cute so that didn’t bother me. As far as my education and my being turned on with new things, it was a very exciting time.

John—And what kind of new things were you being turned on by?

Willem—Oh, I was meeting people that called themselves artists.

John—I read somewhere that you’re going to be playing Warhol in a movie about Yves Saint Laurent. Is that correct?

Willem—It’s not correct. There’s a lot of bad information out there.

John—Well, a movie you’re actually involved with is The Grand Budapest Hotel, Wes Anderson’s latest. You worked with him before. What’s the joy of working on a Wes Anderson movie? Is it the ensemble cast? Is it the props? Is it his design? Is it him?

Willem—You named them all. I think the main thing is him. He’s a guy that really makes the film that he wants to make and your job is to help him do that. He takes you aboard because he knows you’re interested in doing that. He’s very precise and he’s very uncompromising. He’s a true auteur in the sense that his movies really look like Wes Anderson movies and his worlds are a personal expression of what he wants to see. I’m an actor but I’m not only an actor. I’m a filmmaker. Acting is one part of film, but a huge part of it is objects and shots and light and all that. And Wes manages those things beautifully and with great care. You don’t always get that opportunity. 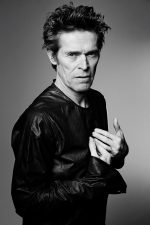 John—Another upcoming film, A Most Wanted Man, directed by Anton Corbijn, comes from the John le Carré novel. And are you a fan of that genre?

Willem—Not specifically. I’ll say this: I don’t watch much television, but the one television thing of all time that I love probably more than anything else was the original Tinker Tailor Soldier Spy. I thought that was just gorgeous. I loved how the story was told and I loved the performances and I loved the writing.

John—There’s actually a line from Tinker Tailor that I love—at one point George Smiley tells another spy that a fanatic is always concealing a secret doubt. It speaks such truth.

John—But it also makes me think of actors. Do you think you’re somewhat fanatical as an actor?

Willem—No, not to the extent that you’re talking about. I read something today: fundamentalism is born out of a need for security. I think as human beings we crave security. One of the nice things about performance is that you can abandon that and play around with something else. Performing is much more about poetry, and indulging doubt, and being flexible, and reconsidering, and chasing things down the rabbit hole. That doesn’t sound like fanaticism to me. I’m fanatic in my discipline because I want to keep those opportunities coming, because I’m totally selfish and I want to keep on returning to that place that I love, that place where you feel useful. You disappear into the act and then you feel like you live it.

John—You mean the way you get into a role?

John—When it comes to getting into roles, the Shakespearean actor Mark Rylance has said something along the lines of, “It’s very simple, I pretend, like a child.”

John—Welcome to my business. [Laughs] Let me ask you about Anton Corbijn, and working with him.

Willem—I like Control very much. And I shot with him as a photographer. Also, it’s just how he approached me. He came to see me perform in Amsterdam and we talked afterwards and the idea of me playing this British banker was kind of outside-of-the-box casting, so I appreciated that.

John—You worked with Phillip Seymour Hoffman on the film. Did you know him from theatre circles in New York?

Willem—You know, I didn’t. I’d met him and I’d seen him perform and of course I’d seen him in many movies. Most of my scenes were not with him in A Most Wanted Man, but I got to know him a little bit and I liked him a great deal. I thought he was really smart and sweet and funny. I didn’t know him well; I did not. But what I knew I liked. I’m still quite shocked because we had just been at Sundance to show A Most Wanted Man, and he was gone just a week later. It’s still quite haunting to me.

John—You were both so involved in New York theatre. You have a long history with the Wooster group, and more. What’s the importance, today, of experimental theatre?

Willem—On this topic I can only talk about me. [Laughs]

Willem—I was with the Wooster Group for something like 26 years and when I stopped working with them, I missed it and I was looking. I will say, a couple times I’ve been tempted to see what it would be like to do a conventional play. But I haven’t had that experience. I like performing live because it’s athleticism, it’s ritual, it’s the fact that you control your own timings.

The importance is now that everybody’s retreating into their own little self-made worlds, theatre is a beautiful, social, public art form where we can all get in a room and watch people get up in front of us and do things that change how we think. That’s important. And that also takes the pressure off the slog of being a human being, and being reminded every second that we aren’t good enough and we’re dying every moment. [Laughs]

Willem—[Laughs] It’s getting dark where I am.

John—The conventional roles that could tempt you: what might those be?

John—On the other side, there’s your work with Robert Wilson.

Willem—I’m still performing in those pieces; we’re still touring. I’m doing this piece, The Old Woman, which is a two-hander, with Mikhail Baryshnikov at the opera house at BAM. It’s based on writings of a Russian absurdist in the thirties by the name of Daniil Kharms.

John—And what’s it like to spar in a two-hand scene with Mikhail Baryshnikov? 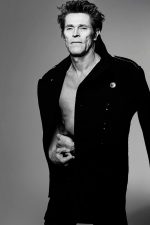 Coat and Pants by Burberry London.

Willem—Well it’s nice because, as is the case with a lot of Bob Wilson’s work, there’s a lot of movement. We are animals in a landscape. We’re moving through his space, through his colors, through his light. So it’s fun because we know Mikhail’s a dancer and we know he’s an actor. It’s fun to see where those different disciplines work together. I also enjoy working with Bob because his approach is very formal, but at the same time in his strict structures I find great freedom.

John—Is it intimidating to move with Baryshnikov?

Willem—Initially, yes. I’m very aware of who he is, but once you get into working then all your attention goes to problem-solving and that stuff goes away. I grew up with him being one of the greatest dancers in history. The truth is that I’m somewhat a frustrated dancer. I feel most comfortable in movement, much more than I do in traditional acting. I mean, where I live, where I act, is when I’m just using my body and movement.

John—Your previous collaboration with Robert Wilson was The Life and Death of Marina Abromovic. Was that a play? Was that performance art? Was it something else?

Willem—It’s a Bob Wilson film and there’s very beautiful music by Antony Hegarty and Billy Basinski, and Marina is at the center; she is the material. I don’t know what you’d describe it as. I think it’s closer to being an opera, because it’s live music and text. They’re unconventional things, let’s put it that way.

John—One of your fellow Nymphomaniac cast members, Shia LaBeouf, has been making a lot of noise about performance art. Do you think that life as a celebrity has a carnivalesque quality that makes it worthy of meta-commentary?

Willem—Oh, god. That’s a tough one. I don’t know him. I did work with him. It sounds like he’s trying to make something, so let him make it.

John—What medium would you like to work in next?

John—I’m wrapping up here, but you bring up love. You have to fall in love with a project. In terms of your work and life, if you can draw a line between the two, when have you been most in love? Do you know?

Willem—Yeah, it’s pretty much the same all the time. Once I’m in something, that becomes my world; that becomes my family; that becomes my life. The further away it is from my life, whether that’s geographically or character-wise, the more intense it is, because you can abandon your habits and your patterns. I’m not one of these guys that, when I go to location, I bring my music. I go there with a suitcase in my hand.

John—I think that’s as good a point as any to end on. Thank you for the thoughtful replies. 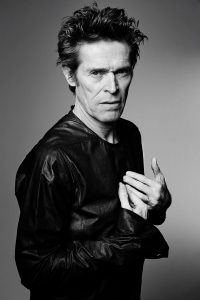 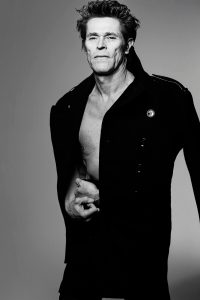 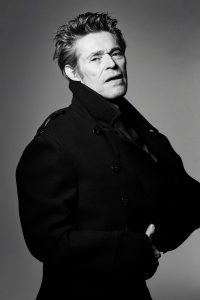