Celine’s Spring/Summer 2019 menswear campaign spotlights the most iconic looks from Hedi Slimane’s fresh, youthful first collection. In a series of black-and-white lookbook images shot by Slimane in London last month, models show off exquisite tailoring and skinny ties (along with equally impressive bowl cuts and flat-tops) inspired by Paris’ Des Jeunes Gens Modernes movement. The animated visual is soundtracked by the 1985 synth number “Polaroïd/Roman/Photo,” an upbeat blend of staccato guitar and a flickering Polaroid shutter. “Polaroïd/Roman/Photo” was the title track of an obscure album by conceptual French synth-pop outfit Ruth.

Polaroïd/Roman/Photo is said to have sold around 50 copies before Ruth disbanded, though the record has since become something of a collector’s gem amongst fans of underground cold wave hits. If there’s any designer who’d be familiar with it, it’s Slimane, who has imbued his collections with music and subculture since his Dior Homme debut changed menswear forever—introducing us to that winning formula of young street-cast models, turbulent original soundtracks, and exquisite skinny suiting.

Paris’ Des Jeunes Gens Modernes movement crystalized in the wake of punk and against the backdrop of the Cold War, bringing punk’s nihilism into the age of synthesizers. While hardly an optimistic genre, it was a unifying one, heard from the suburbs to legendary Paris nightclubs like Le Palace, where aristocrats rubbed shoulders with queer punk kids. Masculine hallmarks of the youth movement—including hanging two-pleat trousers, crisp collar shirts, and wraparound eyewear—have been updated for Celine’s Spring/Summer 2019 collection. Parisian “bibi” hats are specifically informed by Slimane’s own club kid years at Le Palace.

And in the spirit of today, Celine’s menswear is in fact unisex. No doubt Ruth would have appreciated this blurring of gender lines. It was later discovered that the band’s elusive female vocalist never existed in the first place—Ruth M. Ellyeri was the pen name and anagram of (male) singer Thierry Müller. 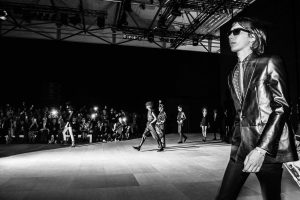