The Italian designer made his return to the runway with his Berlin tinged Random Identities, shown at the SSENSE HQ in Montreal.

Sometimes one might wonder, that after so much time off—in this system of quick replacement and short-term trend overhaul—whether a designers return to fashions fray will be marked by not only archaic styles, but by outdated ideals as well, as they attempt to insert themselves back into the cultural milieu. There was surely sparks of our current ideological and personal movements five years ago, but the landscape that has come into the public consciousness to be seen as our norm is a vastly different set than what was in place even two years ago. Thankfully, and it should be not all that surprising, Stefano Pilati breathes fresh in his long-awaited and begged-for return to the catwalk with his new menswear venture, Random Identities. The Italian designer who helmed Yves Saint Laurent from 2004 until 2012 has kept a relatively low profile since he left menswear brand Ermenegildo Zegna in early 2016.  Staged at the immaculate and sprawling SSENSE headquarters in Montreal, where impeccably dressed employees and invited guests sat and stood alike, Pilati captured, in an easy way, the blurring gender lines that have come to define our zeitgeist, neither forced nor obvious. 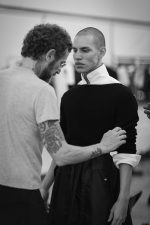 If there were to be a cannibalization, a phoning in of our sartorial view of gender, it would be only heels and dresses and colors that have in past been deemed opposite to masculinity. Heels and mini-skirts certainly did make their way into the collection, but rather than an overzealous attempt, these were understated and clean, there not to be gawked at but to be comfortably worn. Past all the normal hubbub, Berlin was where you would find these clothes, with baggy cargo pants of nylon ruling, topped with form defining jackets and sculptural shirts. The color palette too was pared back to the base form; dark colors with a contrasted white appearing here and there. These are clothes that help you hone in on your presentation of identity—deciding not to overpower. They give space to further expand upon yourself, rather than forcing a submersion of oneself into the clothing. 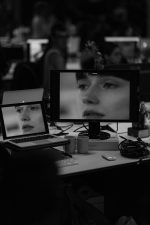 Set amongst SSENSE office, the show ran straight down the aisle between desks, hundreds of blinking computer screens all tuned into the livestream taking place on the SSENSE website. Whereas many livestreams of runway shows consist of static shots, a pure and unadulterated look at the clothing, here, again, Pilati strays from the established norm. Joining his decision to show in Montreal, far off the normal fashion calendar, the video feed started out before the show with an exploration of the attendee’s—guests and SSENSE employees alike—as they waited, turning the internet spotlight at the bright and creative individuals there to witness the collection. The show itself interspersed traditional views of the runway with close-ups and steadicam shots that tracked their subjects as they were sent out one at a time; with rear views focusing on shoulders or footwear as they marched their way down the aisles. A palpable energy lay in the video, a true grasping on how to make a show in the days of youtube videos and dynamic digital constructions. Leave it to a designer who’s laid low over the past few years to truly capture how to create engaging content meant specifically for online audiences.

That night, just hours later, we were all of us huddled around the dinner table between bites, looking at the clothes online only to find to our dismay that they were already selling out—long-sleeve shirt down, now the baggy cargo pants… gone. By morning, it seemed everything in my size was gone. That surely must be a sign of his capturing of our self, the dismay at Pilati’s departure years before, and the refreshing nature of his return. 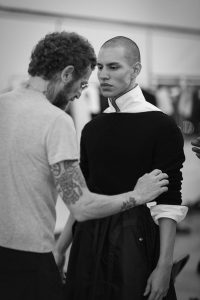 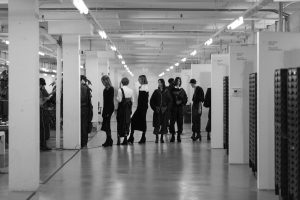 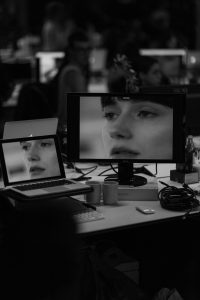