At this year’s Art Basel in Miami Beach, Paul Soulellis spoke for a panel hosted by Document Journal at Prada Mode regarding his genre-bending artistic endeavors in experimental publishing and queer methodologies. Paul’s work, Library of the Printed Web—an archival collection questioning the ways in which we engage with print and digital materials—has become influential within the publishing community, sparking a wave of projects which explore materiality. Library of the Printed Web was created from a large amount of digital work that Paul collected over the years with the hopes of preserving and disseminating digital art by translating it to print. “If you think of printing something out as freezing that material—the printout doesn’t change. We think of digital material as changing all of the time,” Paul told me after Art Basel wrapped up, and it was this sentiment that prompted Library of the Printed Web. Recently, Paul finished his first edition of Queer.Archive.Work, a collaborative project with artists across the globe that challenges the perception of normative work. Above all, Paul is a community builder. The unity he creates through his varied projects gives hope to many, and provides a pathway to active resistance through personal expression—something necessary in such a divided time.

David Aaron Brake—When you’re working on a publication like Library of the Printed Web, how do you balance—I imagine it would be difficult—this relationship between your own design intentions and the collection at large, while still respecting the intentions of the artists that you’re trying to promote?

Paul Soulellis—Yeah, that’s a great question. It came up all of the time. I’m a graphic designer; I was working on these publications as an editor, as a curator, and then publishing them. But I was also designing these issues. How do I present this work in a fairly neutral way, but also how do I give the whole project some identity and some personality? I don’t know if I came up with any magic answer to that, except that I was trying to constantly be aware of always putting the artists’ work first, sn all of the issues, I always told the artists, ‘Here is the real estate that you’ve got—I’m going to give you six pages, or 10 pages, or these two spreads. Or it’s going to be a newspaper publication and you’re going to get the front and back of one giant newsprint sheet.’ And I think artists always appreciated the clarity of knowing that this is exactly what you have to work with.

David—You mentioned something I found interesting. You said “real estate” when you referred to space on the page. I’m interested in this attempt to figure out what is a material object. Your projects really grapple with that. As you’re working with these artists who created something in one medium, the attempt to turn it into something more physical—how do you do that? Is it an intentional effort or is it more trying to preserve artists work?

Paul—The printed part of it was really important—the materiality of it. I was really interested in this whole project of Library of the Printed Web, in how to change that relationship with the material. How do we take something that is meant to be seen for less than a second and pause that? How can we slow down our experience with the internet? And when something is printed out, maybe you aren’t going to look at it forever, but you might look at it for longer than a couple of seconds, and you end up having a different relationship with that material, and beyond that, it’s always there. Our relationship to zines, to books, to magazines, is very different than it is to digital material. We tend to keep these things, they tend to get preserved in libraries—they stick around. It’s actually really hard to get rid of books [laughs], in the world, I mean. You might get rid of a book in your library, but unless you’re burning a book, they’re usually sticking around.

The fact that Library of the Printed Web was constantly being collected by major museums, special collections at libraries and schools, that was really important to me. Finally, when it got acquired by MoMA Library, that just was perfect for me. Because I thought: okay, this whole thing, this whole collection—in the end it was something like 250 works by at least that many artists—this thing is now going to be taken care of and preserved well beyond my lifetime. And it’s going to be there as a resource, filling in a little part of history, of how artists work, and worked at the beginning of the 21st century.

Paul—Once Library of the Printed Web was parked there at MoMA, I started to get that itch again to want to work with artists in that direct way and to bring them together. I started reading some queer theory and some works by artists who were talking about how, in the history of archives, it’s frequently the LGBTQ community left out because of neglect, because of homophobia, racism, all sorts of things. I started thinking about how I was feeling the need to bring people together who are working with their artistic practice, or their writing, in non-normative ways—people who are working in ways that I would say fall into some kind of queer methodology. My simple definition of that is: “working in a way that is working to subvert, work against, or provide friction against what we consider to be normative.”

It doesn’t mean that everybody who appears in Queer.Archive.Work is necessarily identifying as queer, it just means that I’m bringing their work together, into some kind of—I like to use this phrase, “contact zone”—that’s a phrase from Sarah Ahmed, where she’s talking about how, in an archive, certain things are just in proximity, or they come together in a way so that’s what I’m trying to do in this publication, is in a very loose way—and I call it a “loose assemblage”—bring a collection of twelve or thirteen people together, and have their work engage in a conversation.

David—I was looking on your website, and I noticed a focus on publishing as an act of resistance. You touched on that a bit just now, but I was wondering if you could go into what you mean by resisting through publishing.

Paul—I’ve been asking myself—and I know many other artists are asking themselves—what to do in the age of post-truth—post-Trump. [I was] frequently finding myself feeling hopeless, or that there’s not much I can do with my work. I would say that my work has taken a little bit of a political turn, that I feel like there are certain privileges I have, and that part of that privilege—being white, working as a professor in a highly regarded arts school—could involve bringing people together in a way that exposes their work, that circulates it, that elevates it, highlights it. I feel like just by doing that work of bringing queer methodologies together in the space of a publication, and getting it out there, getting into people’s’ hands—that to me feels like a very small work of resistance—resistance against those who might exclude or even dismiss or disparage people making work from these positions. This first issue I created an edition of 300. And it’s gone, it sold out, it’s out there. Knowing that those 300 issues are sitting there in libraries, in collections, and in individuals’ hands—there’s an immense satisfaction that I have that this material is out there in a way that it wasn’t a couple of months ago. That’s what I mean by publishing as an act of resistance. I think it could probably do more, and go further, and that’s what I want to continue exploring. 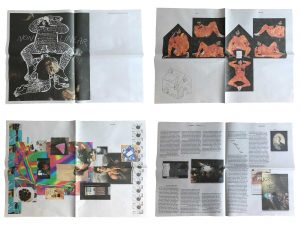 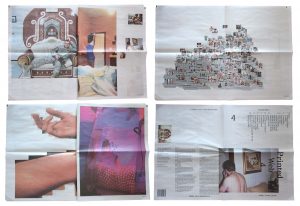